Next on The Scoop: Meet Bandit, the USO’s First Therapy Dog
Health & Care 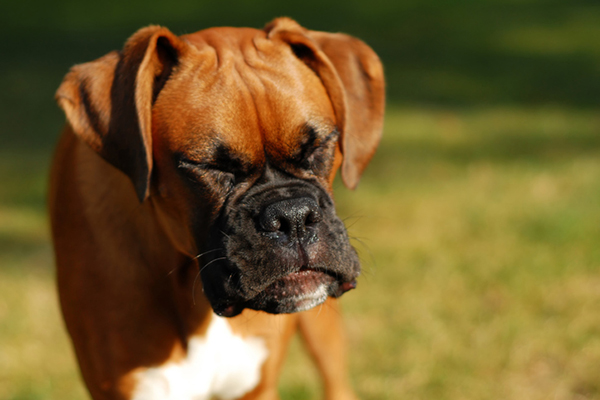 Reverse Sneezing in Dogs — What Is It?

Reverse sneezing in dogs isn’t even really sneezing at all. Learn more about how everything from household cleaners to cancer could cause reverse sneezing.

So, what exactly is reverse sneezing in dogs then?

Reverse sneezing isn’t even really sneezing at all! Photography by igorr1/Thinkstock.

Officially termed pharyngeal gag reflex or paroxysmal respiration, reverse sneezing in dogs is a condition where a dog will extend his neck and begin making gasping sounds as though she can’t catch her breath.

What causes reverse sneezing in dogs?

The most common cause of reverse sneezing in dogs is that something irritated the dog’s soft palate and throat, which then causes a spasm. This irritation affects the trachea, which narrows and makes it harder for the dog to get air.

Pay attention to what’s going on when your dog begins reverse sneezing. If the behavior occurs after you clean, it may be a reaction to residual chemicals in the air. Cigarettes and marijuana are also irritants and cancer-causing carcinogens to pets, and some dogs are extra-sensitive to candles and incense. Use all-natural, pet-friendly cleaners, and do your cleaning when your dog is in another room.

“Reverse sneezing in dogs can cause some anxiety for pet parents, who may mistake it for coughing. The two behaviors sound similar to an untrained, unfamiliar ear, but actually have many differences,” according to Michael S. Stone, DVM, DACVIM, a small animal specialist at the Cummings School of Veterinary Medicine at Tufts University. “A dog coughing will expel air out of the mouth, resulting in a dry, hacking noise. Reverse sneezing involves rapid inhalations through the nose, indicated by the pig-like snorting.”

What to do about reverse sneezing in dogs

Massaging the dog’s throat, or covering her nose to make her swallow, can help clear out whatever is irritating the throat. If this doesn’t help, try offering food and water, or taking your dog outside.

Most dogs will recover just fine on their own. However, if the reverse sneezing continues, get a veterinary consultation.

When is reverse sneezing in dogs serious?

Signs that reverse sneezing needs vet attention include blood or discharge from the nose, any kind of deformity around the nose, a lack of energy or appetite, or any breathing problems.

What breeds are more prone to reverse sneezing?

Brachycephalic breeds with flat faces — like Boxers, Pugs and Shih Tzus, for instance — have soft palates that are stretched. These dogs may experience bouts of reverse sneezing more frequently than other breeds because they can actually suck the palate into their throat when they inhale. Smaller breeds are also more apt to be affected by reverse sneezing because they have a smaller throat.

Also, if you have a cat and she’s experiencing this condition, make a veterinary appointment ASAP. This is a sign of feline asthma, which can be fatal if left untreated.

Join the National Park Service’s Park — or Rather — B.A.R.K. Rangers

2 comments on “Reverse Sneezing in Dogs — What Is It?”