Next on The Scoop: Do People Whose Dogs Attack Others Deserve Prison Time?
Dogster Tips

DIY Dog Care: How to Give Your Dog an At-Home Spa Day

If done right, you can calm even dogs who hate bath time and make them feel great.

After a hard, dirty day of chasing squirrels, nothing soothes the not-so-savage beast like a nice, relaxing bath. But if you’re like me, even spelling out the “b”-word is enough to send my two pups, Daisy and Bud, into a panic. Yeah, you could spring for a grooming to get the grit out, but I actually found that setting a spa-like vibe helps us all relax and get the job done at home.

So not only does the word “bath” alert my geniuses that the unthinkable is about to occur, but it’s even gotten to the point that reaching for my waterproof apron and gloves, not to mention their shampoo, brushes and towels, sends them scampering under the bed, never to be coaxed out again. So my work-around consists of gathering all of that stuff into a tote bag way beforehand and stashing it behind closed doors in the bathroom. Works like a charm. 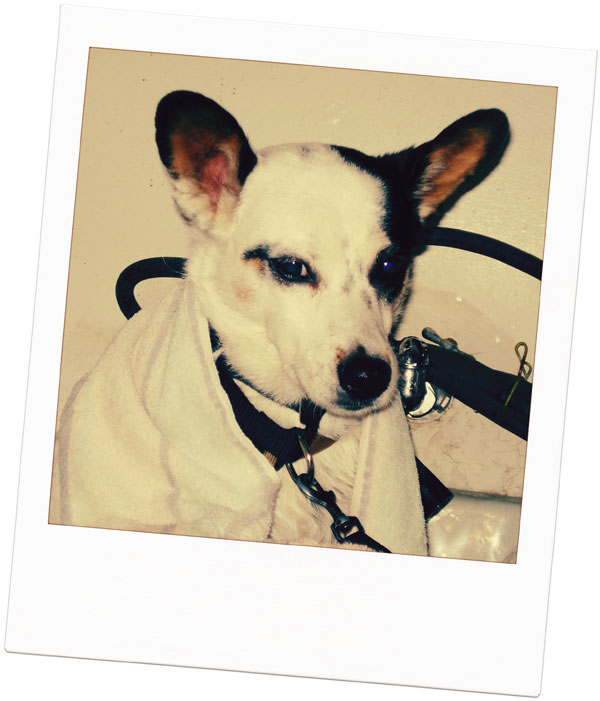 The idea is to make the environment as calm and peaceful as possible, since my dogs are anything but calm when in close proximity to a bathtub.

Instead of the often harsh bathroom lights, I like to turn off as many overheads as I can and instead spark up some candles. Now in the olden days — like five years ago — those weren’t an option. I was too worried that one of my pooches would knock one over and start a fire. But now, there are these great inventions called “flameless candles,” that are perfect for the situation. They’ll run you about $5-$15 at a bed and bath store, but they’re totally worth it. Some of them are even lightly scented. But remember dogs’ noses are a gazillion time more sensitive than ours, so a little aromatherapy goes a long way. 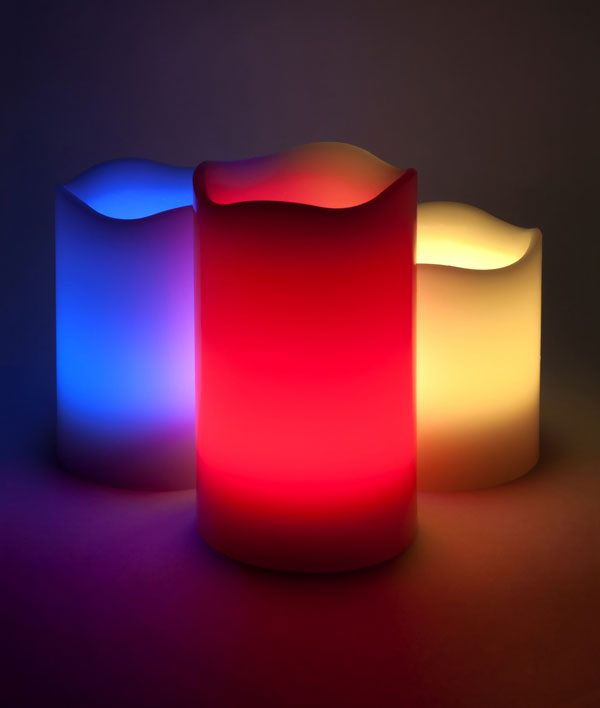 Music to my dogs’ ears ranges from classic rock to classical, so I’ll fire up some of that for them to listen to. Or we’ll howl along to some blues. But there are great spa sounds CDs and music feeds online as well. I also move slowly and use a soothing tone of voice. It’s all about setting the vibe.

Who doesn’t like a nice rubdown? At our house, it’s basically the act of being petted with long strokes, which is a favorite activity anyway. It’s also not a bad idea to brush your dogs out before the bath, to get rid of as much excess hair as you can (your tub drain will thank you). And you can accomplish both in one fell swoop by using a massage brush with rubber bristles. The gentle pins not only stimulate the skin’s natural oils for a shiny, more healthy coat when dry, but they’re also great to use in the tub itself to gently massage the shampoo into the dog’s coat. So now that we’re all relaxed… 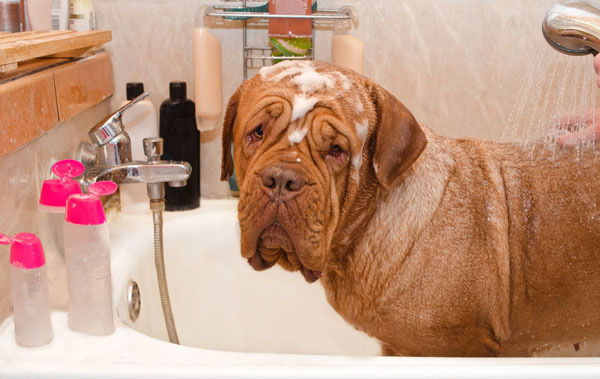 Turn on the water and get the temperature right (not too hot, not too cold) before putting your dog into the actual tub. Treats come in handy at this point, to coax your pal to either jump into your arms or into the tub itself. Get him wet all over. I use a big plastic pitcher for the job, but a built-in sprayer is definitely handy.

There are almost as many choices for dog shampoos are there are for humans, at every price point, in every scent, with every combo imaginable for skin, coat type and more. And if you really want to go all-out, there are even actual doggie-spa scrubs, including one I found that offers “a combination of grapefruit seed extract, apricot and avocado oils and sulfur to provide relief from flaking skin, excess oils and scratching.” We prefer the basic oatmeal formula. But whatever shampoo you decide to use, make sure to rinse it out well, using your hands to squeeze out the excess. Now jump back! There will undoubtedly be a whole lotta shaking going on.

You know how after a spa treatment, they give you a nice comfy robe to lounge in and a nice cup of water with an herb or fruit infusion to sip? Then you know what’s next for your pooch. For that final relaxing touch, rub him all over with the biggest, fluffiest towel you can find (this is my dog’s favorite part). It may take more than one towel to dry, depending on the size of your dog. Offer up some nice, fresh water and let him ease back into the day by chilling out with a chewie… Now give yourself a nice big tip! 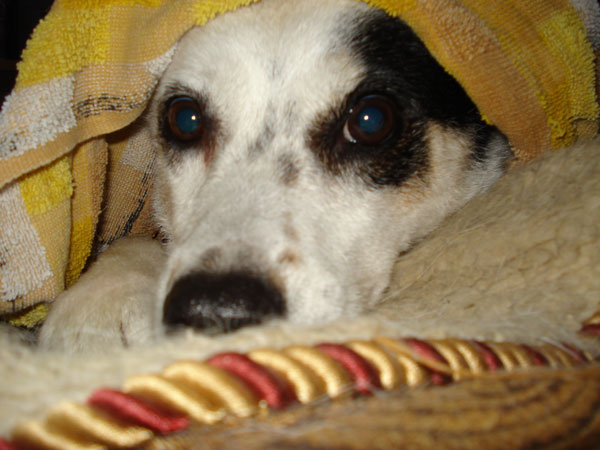 Read more about bathing and grooming your dog:

About the author: Atlanta’s own Toni Perling writes mostly about dogs — hence her blogger name, Doggienista, and her rescues Daisy Jo and Bud Earl. She tweets for them at DaisyJoBudEarl and covers all the latest Hollywood dog scoop at her Celebrity Dog Blog. She’s also a longtime supporter of spay/neuter/rescue. Toni started out in Hollywood as a TV writer, with credits ranging from network drama to informational, including a boatload of episodes of a little Discovery Networks show named I Didn’t Know I Was Pregnant, before transitioning to the web.

6 comments on “DIY Dog Care: How to Give Your Dog an At-Home Spa Day”