Next on The Scoop: Ask a Trainer: What Makes You a “Responsible” Dog Owner?

Whether they have short hair, long hair, smooth or coarse hair, all dogs need a little help from humans when it comes to grooming.

As a new dog owner, my grooming experience has pretty much been limited to backyard baths and following our Lab-mix GhostBuster around with a vacuum cleaner (seriously, last weekend we upgraded to a shop vac).

According to Shaw, grooming is simply another aspect of training — and improper training can create unhappy grooming sessions for everyone involved.

“If you have a new puppy, it’s important to get them used to brushing, bathing and having their feet, faces and ears handled from day one,” says Shaw.

She stresses the importance of introducing grooming early, especially for breeds who will need haircuts throughout their lifetime. When pups have had their second set of immunizations, around 13 weeks old, Shaw offers abbreviated grooms to get the little ones used to being in a different environment and used to being handled.

But what about dogs like my GhostBuster, who didn’t find his forever home with me until he was two years old?

“For rescues or dogs acquired later in their life, it’s important to approach grooming with a calm manner and lots of praise, making every experience positive,” says Shaw. “Even dogs who are predisposed to having a bad reaction to grooming can be turned around with the right encouragement.”

She recommends owners approach a new dog’s grooming in a calm, firm and patient manner, and include lots of positive reinforcement like praise and treats for the dog’s calm cooperative behaviour.

“Shorter sessions may also be useful,” Shaw explains. She also tells owners not to let the dog decide when grooming is done.

“If the owner gives up every time their dog or puppy reacts poorly to an aspect of grooming — like ear cleaning, tooth brushing, or combing out tangles — the dog will learn very quickly that acting up means that grooming stops.”

Owners who aren’t able to be calm and anxiety-free when teaching their pet about grooming are advised to book professional grooming sessions until they get used to it.

Another common problem groomers deal frequently is matted fur in longer-haired dogs, but the cause of the mats isn’t always obvious to owners.

“Most pet owners don’t know that when a dog with long or thick fur gets wet, they have a higher likelihood of getting painfully tight tangles and mats,” says Shaw, who recommends brushing as much dead or tangled hair out of the coat before a bath, swim or walk in the rain or snow.

“A quick brush to check for tangles before getting wet can prevent a lot of uncomfortable brushing or a shave later on.”

Shaw also suggests doing a quick brush after the dog has dried off, just to make sure any dead hair loosened up by the water comes out. If mats are discovered during a bath, she recommends using conditioner and a comb to loosen them as much as possible, and says blow drying will help break the the tangles apart. 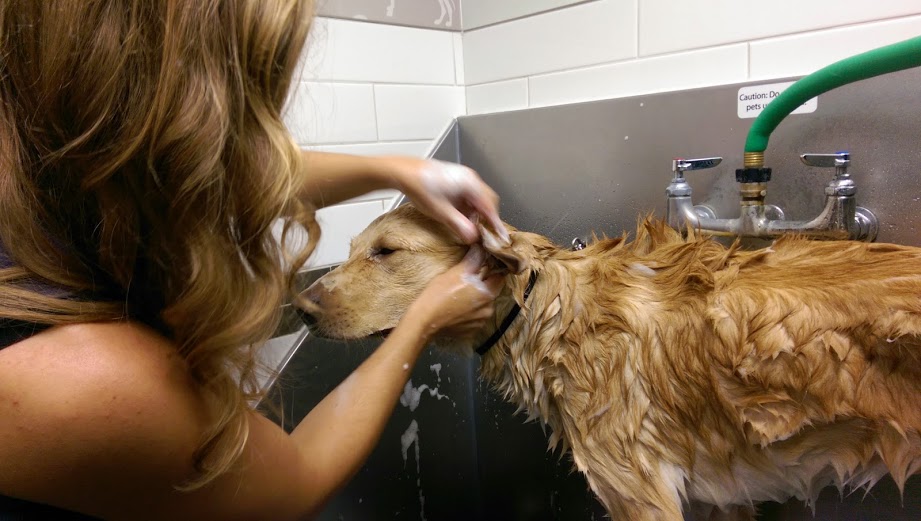 “Be thorough,” Shaw cautions. She says many owners concentrate their brushing efforts on their dog’s back, missing other areas that need grooming just as much.

“It’s important not to forget about those trickier areas like faces, ears, tails, bellies, bums and legs when grooming at home,” Shaw advises. “For shorter-haired dogs, it’s still important to brush all areas to promote healthy skin, oil production and fur growth.”

Your groomer can tell you which at-home tools are best for your pet, as different coats need different brushes and tools.

Shaw says part of a thorough groom includes checking the inside of ears and mouths, and suggests asking your vet or groomer what the most appropriate cleaning schedule is for your dog.

“Expensive and painful dental and ear issues can be easily prevented with regular maintenance.”

“It seems cute when your pet snaps frantically at the garden hose, shakes her head when you blow on her ears or plays chase with the hair dryer or vacuum,” says Shaw, “but this type of teasing can make grooming really difficult for you or your groomer and scary for your pet.”

A professional groom involves equipment that vibrates, shakes, sprays, and blows air at the dog, and Shaw says owners need to make sure that they’re not teaching the dog to bite or run when a groomer turns a tool on.

“Some owners also can contribute to head, tail or feet sensitivity in their pets by teasing them,” says Shaw, who suggests creating positive experiences for the dog when having those areas handled.

According to the professional groomer, “playing shake a paw, or gently grabbing their tails, jowls or ears while giving lots of praise,” makes grooming safer, as the dog won’t overreact to being touched in those areas.

When the weather starts to get colder (as it already has in my part of the world) owners understandably want to make sure that their dog has enough fur to keep them warm, but neglecting grooming actually does more harm than good when it comes to protecting that insulating coat.

“When grooming is neglected for cooler months, matting often occurs before the weather warms up in springtime,” says Shaw.

The only cure for that kind of severe matting is a short shave — the exact opposite of what dogs and owners want in the middle of winter. “Regular maintenance throughout cold wet, months can prevent a bald dog in February,” Shaw explains.

Regular maintenance and appropriate training seem to be the keys to grooming success. I’m happy to say that with Shaw’s help, it seems like my GhostBuster is getting the hang of getting his hair done.

Does your dog like going to the groomer? What are your biggest problems when it comes to grooming your pup? Let us know in the comments.

About the author: Heather Marcoux is a freelance writer in Alberta, Canada. Her beloved Ghost Cat was once her only animal, but Specter the kitten and GhostBuster the dog make her fur family complete. Heather is also a wife, a bad cook and a former TV journalist. Some of her friends have hidden her feed because of an excess of cat pictures. If you don’t mind cat pictures, you can follow her on Twitter; she also posts pet GIFs on Google +