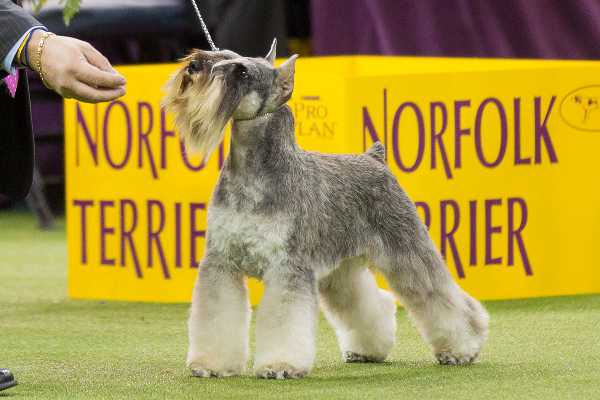 Tough without being aggressive, dapper without being a wuss, and sporting the trademark beard and eyebrows, the Miniature Schnauzer has scored worldwide popularity.

Tough and fearless without being aggressive, dapper and elegant without being a wuss, and sporting the trademark beard and eyebrows that give him a comical, human-like expression, the Miniature Schnauzer has scored worldwide popularity. Few Minis are required to demonstrate their working dog roots today, but they boast a long history in the service of humankind.

The beard on the Schnauzer muzzle is much more than a fashion statement. In fact, schnauze means muzzle in German. Not many breeds are named for a physical feature. Combined with bushy eyebrows, the Schnauzer’s whiskers and facial hair stamp him with an unmistakable look.

2. A breed of antiquity

Back in 1503, painter Albrecht Durer depicted a Schnauzer in his watercolor Madonna with the Many Animals. A representation of the Schnauzer also appears in a tapestry made in about 1501.

The Miniature Schnauzer is the smallest of the Schnauzer trio. The breed was developed to excel as an all-around farm dog and rat catcher. The larger Standard and Giant Schnauzers were also used as drovers, to pull carts with produce from the farm to town and guard them.

Here in the U.S., Miniature Schnauzers can be seen competing in Barn Hunt and Earthdog trials, as well as in conformation, obedience, agility and rally.

The American Kennel Club has always classified the Miniature Schnauzer in the Terrier Group while European registries put the Mini in the Working Group alongside the two larger breeds, the Standard and Giant.

3. Grooming guidelines for a Miniature Schnauzer

While the American Miniature Schnauzer Club calls the breed “non-shedding,” the trade-off is frequent grooming, which takes special skills and is typically left to the professionals.

The breed has a double coat: a wiry topcoat and a soft undercoat. To maintain the correct texture of the double coat, show dogs must be hand-stripped or plucked, a meticulous and time-consuming technique.

Most pet owners have their dogs clippered, which does result in a softer coat. Whichever method you choose, the coat is relatively odorless, and you won’t find hair all over your clothes and furniture.

The “silver” color most people use to describe the Miniature Schnauzer is more correctly known as “salt and pepper.” It results from the combination of black and white banded hairs and solid black-and-white unbanded hairs, with the banded hairs predominating. All shades of salt and pepper are seen, from light to dark mixtures.

The salt-and-pepper mixture fades out to light gray or silvery white in the eyebrows, whiskers, cheeks and the backs of the legs. Minis also come in black and silver (in this pattern, the entire salt-and-pepper section is black) and solid black.

Although there are solid-white Miniature Schnauzers, and dogs of this color may be exhibited in European dog shows, it is a disqualification in the AKC breed standard.

The Miniature Schnauzer standard describes the breed as a “robust, active dog of terrier type, resembling his larger cousin, the Standard Schnauzer, in general appearance, and of an alert, active disposition.”

Faults include “toyishness, ranginess or coarseness.” Size must be 12 to 14 inches, and dogs of either sex that are under or over that prescribed height range are disqualified in the show ring.

6. Celebrity owners of a Miniature Schnauzer

You might recognize this Miniature Schnauzer from Disney’s Lady and the Tramp. Photography ©adogslifephoto | Getty Images.

In Disney’s timeless, animated film Lady and the Tramp, Tramp was a Schnauzer, the dog about town who captures the pampered Cocker Spaniel’s heart and with whom Lady shares perhaps the most famous strand of spaghetti ever.