Next on The Scoop: FedEx Driver Takes Two French Bulldogs While Making Deliveries, But They’re Back Home Now

Update: Dog Left at Train Station With Suitcase Was Victim of Botched Sale

A scam artist tried to sell Kai the Shar-Pei at a Scotland station, but then abandoned him when the buyer asked too many questions.

Yesterday, we told you about the Shar-Pei mix who was found abandoned Friday night, tied to a railing outside the Ayr train station in Scotland. He had a suitcase. In that suitcase was all his stuff: a pillow, a toy, a bowl, and food. 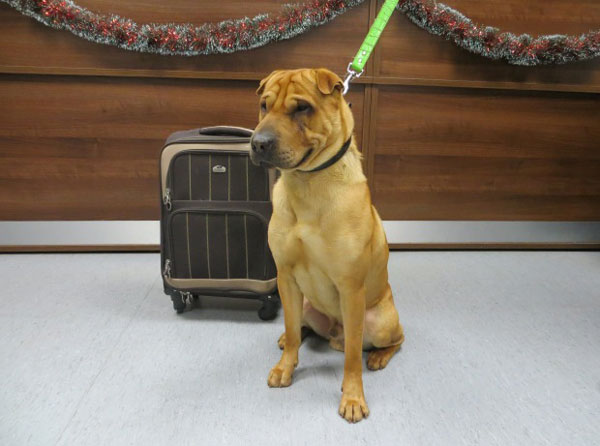 Fortunately, the dog was quickly scooped up and taken to the Scottish SPCA, who launched an investigation. Scotland doesn’t take animal abandonment lightly; inspectors cited the Animal Health and Welfare (Scotland) Act 2006 and asked the public for information.

The strange, touching story exploded on social and regular media — many people saw parallels with the story of Paddington Bear, who has a movie out now.

Finally, we have some real explanations. The dog, Kai, was the victim of a botched sale by a scam artist.

Yesterday, a woman came forward and said she had come to the train station to meet a man who was selling a dog on Gumtree, an online classified site in the UK. But when Fin Rayner arrived, things got weird.

“The guy rushed out with a food chest and lead on the dog,” she told the Telegraph.

Then her daughter noticed that the dog was not the one pictured in the ad. Still, Rayner gave the dog a fair chance.

“I said I wanted to take the dog for a walk, so he asked me for ￡150 as a deposit in case I didn’t come back. Then I saw him tearing off in his car. I phoned and said, ‘You better come back for your dog.’ He never turned up,” Rayner said. 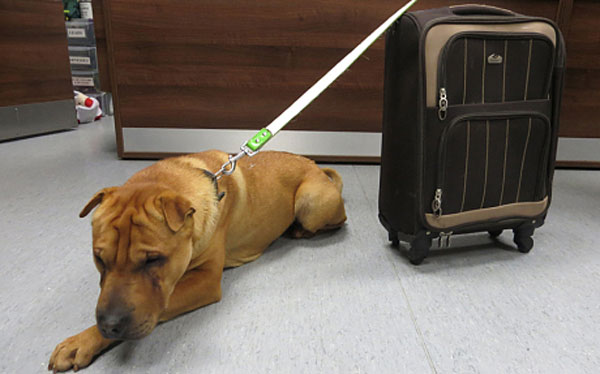 Rayner’s son, meanwhile, was sleuthing out information about the dog back at home. He discovered that the picture in the ad was a total farce.

“I thought I’d take the dog to Aberdeen, but my son phoned and said the photo from the ad was an American picture from 2005,” Rayner told the Telegraph.

Rayner, at a loss, then washed her hands of the situation. She was pressed for time, needing to make the last train back to her town with her daughter, who has asthma. She made Kai someone else’s problem.

“I said to a member of the [train station] staff it was somebody else’s dog. I said, ‘I’m just going to tie him up out there’, and I did that.”

As for Kai, it turns about he needs an operation for his eyes. He is still with the Scottish SPCA, who has been “inundated with lovely messages for Kai and offers of new homes from animal lovers around the world,” according to a JustGiving page for Kai it set up. The fundraising effort will pay for his surgery, with the remaining funds to be used “to help care for sick, injured, and abandoned rescued animals in need of food, shelter, and veterinary care at Scottish SPCA rehoming centres.”

“Thank you to everyone who has been in touch and, in particular, everyone who has offered to rehome Kai,” says the SPCA on the page. “We will soon find Kai a fantastic and loving new home.”

Via the Telegraph; photos via the Scottish SPCA