Next on The Scoop: When Do Dogs Stop Teething? What to Know About Puppy Teething and Dog Teeth
Adoption Socializing Neglected Dogs: What Goes on Behind the Scenes to Make a Mistreated Dog Adoptable

Dog lovers often read stories about dogs who were previously abused but are now up for adoption. How did these neglected dogs get ready for their new homes?

Each individual canine may weather the storm a bit differently. Some, unfortunately, learn to fear and/or avoid social contact. Such dogs may become mistrustful, nervous or withdrawn. Some may growl or snap at the slightest provocation; urinate or defecate in terror; even retreat into the shadows.

Potential adopters may not always realize what a given pet has endured — all they see is an adorable face and a tentatively wagging tail. This could be because that particular pooch has benefitted from specialized socialization training, or behavioral intervention. Sometimes, quite a bit takes place behind the scenes to give a deserving dog a second chance at a normal life.

The humans involved in these focused efforts often represent a diverse range of organizations. What they share is a strong, abiding love for canines; combined with a desire to help educate and support responsible pet parents. We asked two of these experts to share a few firsthand observations. Their insights lend a whole new meaning to the term “rescued.”

Meet the Experts Who Work with Neglected or Mistreated Dogs It takes a team of professionals to ensure that neglected dogs are ready to be adopted. Photography ©gaikphotos | Thinkstock.

Crampton explains that specially trained personnel work with most of these canines at DDB headquarters in Smithfield, Virginia. “Our current property was purchased in 2011,” notes Crampton. “It was once the home of Bad Newz Kennels, the dog fighting compound owned by Michael Vick.” DDB’s ongoing labor of love has essentially transformed a place of traumatic despair into the Good Newz Rehabilitation Center.

Steve Frost, KPA CTP, is director of in-home training at A Sound Beginning. He also serves as animal enrichment and behavior manager for Anderson Animal Shelter in South Elgin, Illinois. Frost doesn’t exclusively focus on pets with a background of abuse, neglect or mistreatment. However, he holds multiple training certifications — and has done more than his share of work with such dogs.

Severely Neglected Dogs — An Unfortunately All Too Common Problem 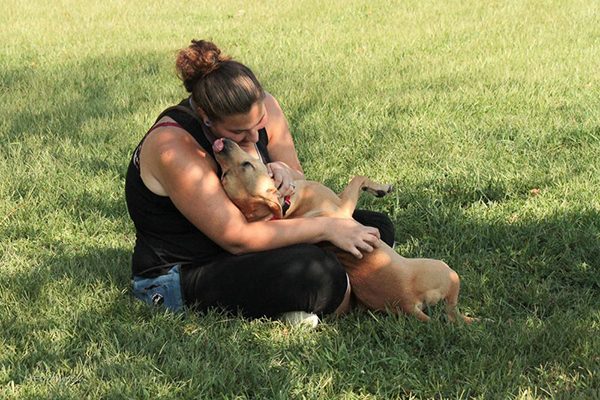 Cyndi of Dogs Deserve Better giving Joshua what he never had before: close contact and some love with humans. Joshua came from the Polk County, Georgia, cruelty case, where 105 dogs were seized off two different properties in the woods. All were secured with heavy 6-foot chains. Photography courtesy Melissa Crampton of Dogs Deserve Better, via Facebook.com/dogsdeservebetter.

Both Crampton and Frost agree that pronounced neglect is a pervasive problem that can affect canine lives in countless ways.

“On an average weekly basis here at DDB, we receive anywhere from 50-70 e-mails and calls regarding animals suffering this degree of neglect,” notes Crampton. “The number tends to increase if there’s a natural disaster, or a dog fighting ring that’s abruptly shut down.”

Frost has witnessed something similar. “In the shelter setting, I’ve encountered many animals with a confirmed history of neglectful mistreatment,” he says. “One of the most common forms we actually see involves lack of proper socialization from a young age.”

Frost explains that this can stem from persistent disregard for an animal’s emotions, and/or chronic exposure to overwhelming stressors during early development. Sadly, he notes, mistreatment in any form often renders the same result: an adult dog who struggles to co-exist in a home environment.

Transforming the Lives of Abused Dogs 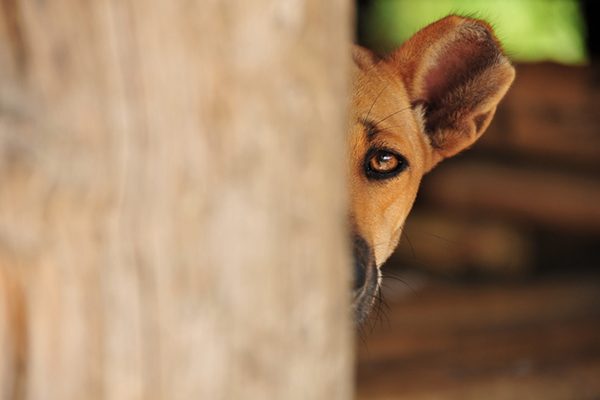 On a positive note, some dogs have truly incredible turnarounds. Photography ©carlonico | Thinkstock.

On the upside, however, both Crampton and Frost have helped to facilitate some fairly remarkable transformations. “Time and again at DDB, we’ve worked with dogs who have been chained with total disregard for their needs,” says Crampton. “Some literally panic when they first encounter any type of open space,” she says. This is one reason why the DDB facility is laid out like an actual house.

“Much of our early work often involves simple home-training,” says Crampton. “Over weeks, sometimes months, we get these dogs used to stairs. We help them feel comfortable in large rooms. We help them overcome fear of everyday noises most people take for granted, such as home appliances. We crate-train them, so they learn that smaller spaces can represent safety and security.”

Highly anxious dogs often get paired with other canines to help build their confidence. Once they become sufficiently comfortable, Crampton says they’re allowed to go on their very first “Freedom Run” in the fenced open yard. She describes each dog’s unrestrained joy as something incredible to behold. 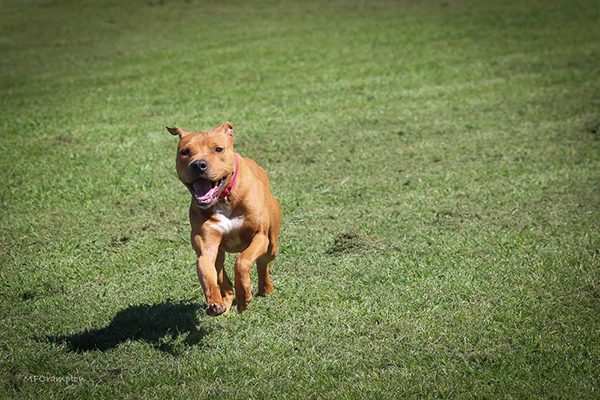 One of Ponder’s first runs being off the chain. Ponder was another off-the-chain rescue from the Polk County, Georgia, cruelty case. Photography courtesy Melissa Crampton of Dogs Deserve Better, via Facebook.com/dogsdeservebetter.

Crampton recalls Elvi, the lone survivor of a residence where 21 dead canines were found in cages amidst dog fighting paraphernalia. Elvi had not necessarily been involved in the fighting, but was nonetheless petrified of everything.

Re-socialization initially involved giving Elvi her own separate room to decompress; then a secure open crate as her “safe area.” Volunteers spent weeks sitting quietly in Elvi’s presence, waiting for her to make the first move. “This little 35-pound girl would eventually come up, sniff your face, then mold herself perfectly into your lap,” recalls Crampton.

As Elvi gradually grew more settled with daily human contact, her caregivers tried introducing another dog. Pittie mix Turbo had been kept on the end of a short chain day and night, for nearly five years. But Elvi’s increasing confidence began rubbing off on Turbo. He progressively “learned” to play in her presence; while Elvi emerged even further from her own shell.

Next, Elvi met the highly anxious Ollie. Initially, Ollie completely ignored Elvi. But she began nurturing him — offering kisses, coaxing him to romp around. “They steadily became best friends,” says Crampton. “All the while, we watched Elvi blossom into a very special dog who went on to help reassure and heal other dogs.”

Frost remembers Kobe, a middle-aged Toy Poodle mix who came to a shelter with clear signs of neglect: horribly matted fur, plus severe ocular issues that wound up requiring daily eye drops. “Unfortunately, this little 20-pound dog quickly became aggressive in response to his medication,” recounts Frost. “His reaction was so pronounced that we became quite concerned about his adoptability and quality of life.”

In cooperation with a caring foster family, Frost taught Kobe to be an active, willing participant in his own daily care. “Over time, we used positive reinforcement that gradually trained Kobe to rest his chin on our knee in preparation for his eye drops,” explains Frost. “Whenever Kobe decided to lift his chin, the training session stopped. We were reassuring him that if he felt uncomfortable, he didn’t need to resort to violence. He could simply get up and walk away.” The eventual result? Kobe’s foster mom was so impressed with his progress that she adopted him herself.

Thinking of Adopting a Dog Who Previously Experienced Neglect or Cruelty? Great! But Keep This in Mind. 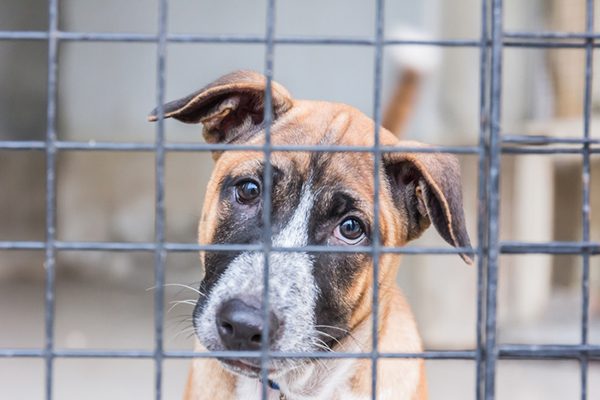 Here’s what you need to know about adopting a dog who previously experienced any sort of abuse. Photography ©AwaylGl | Thinkstock.

What’s the best way to determine if a dog you’re planning to adopt has required specialized socialization or behavioral intervention to become “adoption-ready?” First and foremost, ask. Shelters sometimes provide this insight on certain dogs. Second, remember that many of these animals are well worth considering. “One thing that makes dogs such wonderful companions is their resilience,” emphasizes Frost. “With the right care and socialization, they can absolutely thrive in a loving, caring home that provides for their needs.”

As an adoptive pet parent, proper preparation should include connecting with a qualified trainer or behaviorist. These professionals can help you learn to consider things from the dog’s perspective. “Initially, many of these pets may need extra time to decompress, adapt and learn about the adopter’s lifestyle,” observes Crampton. “If they seem to need space, let them observe from the sidelines.”

Both Crampton and Frost also emphasize that structure and direction are key. “It’s important, yet sometimes very hard, for adopters to understand that they should not overly coddle this type of canine,” Crampton explains. She notes that sympathetic humans will sometimes repeatedly indulge unwanted behaviors; unintentionally leading the dog to perceive himself as ruling the roost. Learning positive behavioral strategies from a skilled trainer can help your new pet understand his role from the outset.

“Socialization strategies based on positive reinforcement can help even severely neglected animals,” asserts Frost. “I’ve seen these canines go from being perceived as an unwanted nuisance to the treasure of an entire family.” Crampton adds that she also enjoys “watching adopters change their way of thinking, learning ways to do right by a canine who deserves a second chance.”

Viewed from these specialized perspectives, focused socialization can give many homeless canines the caring structure and guidance they need to become cherished lifetime companions.

Tell us: Did any of your dogs come from situations where they experienced neglect, cruelty or abuse? What are their stories? How did you socialize a previously mistreated dog?

6 comments on “Socializing Neglected Dogs: What Goes on Behind the Scenes to Make a Mistreated Dog Adoptable”