Next on The Scoop: What to Do for a Dog With Diarrhea
Good Causes 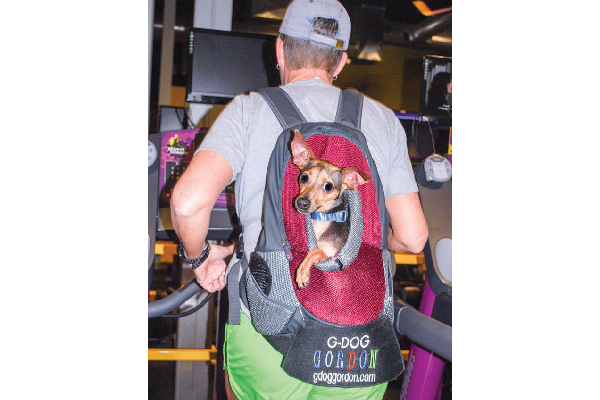 Learn how Janet Turner and her Min Pin mix, Gordon, are #RunningForRescues — and the inspiring story behind why they do what they do.

I’m so touched by the story of this incredibly inspiring duo — they fill your soul with hope. Let me introduce Janet Turner and her 31⁄2-year-old Min Pin mix, Gordon. First off, Janet runs marathons, which is amazing. But that’s not all: She runs them with Gordon — who is a paraplegic dog — so he’s on her back in a backpack. And, of course, they run for an awesome cause.

“Together we run marathons (#RunningForRescues) to raise money for local rescues and shelters,” Janet explains. “We have raised over $15,000 in 20 months of fundraising. Through our runs, we have an opportunity to advocate and educate for special-needs dogs.”

Janet tells us that Gordon is challenged, not handicapped. “I think that word has negative connotations,” she says, “and I prefer not to use it with Gordon or in my work that I do. Gordon doesn’t have any limitations. Gordon has learned to live life on his own terms.”

In fact, she says he runs and plays inside and outside the home, just like any other dog. “On the outside, he tries desperately to keep up with his two fur sisters, who are 10 times his size, yelping and fussing because he can’t keep up with them without his cart. When he’s in his cart, he is able to stay right with them.”

He wrestles with the cat, Carter, on a daily basis, inside the house. “They chase each other throughout the house, and it is the most beautiful sound. To get better momentum, he bounces on his butt making a little thumping noise that echoes through the house. That sound lets me know that he is happy and doesn’t have a care in world.”

As a shy person who has lived with anxiety since she was 21 years old, Janet took on the challenge of getting out of her comfort zone so she could fundraise for this incredibly worthy cause. “Through my uncomfortableness,” she says, “I have grown as an individual.”

Her goal is to get the word out on how great special-needs dogs are and that every dog’s life matters, so they can continue to raise money for “shelters that get very little traffic and up-and-coming rescues that need money to get up and running.” If that isn’t inspiring, I don’t know what is. Follow Gordon on Facebook @G-Dog Gordon.