Next on The Scoop: Teach Your Dog to Respond to Cues — Successfully
Dogster Tips 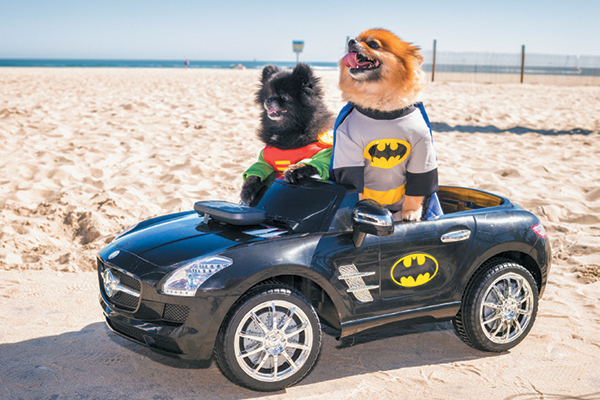 Love a good Halloween parade — and costume contest? Check out these fun Halloween pet parades around the country where your pup has a chance to take home top prizes!

Looking for some fall fun? From coast to coast, there are Halloween pet parades that have dogs putting the wow! in bow wow. Here’s a peek at these annual events from around the country. This is the 18th year that the Haute Dog Howl’oween Parade has been marching on. More than a parade, this event includes pet adoption and vendor fairs. Judges rate costumes on originality, showmanship, costume details and first impression — and there’s lots to judge. For example, the 2016 parade had more than 550 dogs entered! Humans of all ages are welcome to dress up and join the parade. Bella, a Shi Tzu- Pomeranian mix, rolled away with the prize for Best Senior at the Spooky Pooch Parade, with a horticulture theme perfect for the venue!

Dogs are allowed in the Chicago Botanic Garden for just two hours a year — for the Spooky Pooch Parade. Nonprofits and vendors are on hand, er, paw, to sell dog-related products and share info. Costume categories include best dog/owner costume, best puppy, best senior and, in keeping with the venue, best horticultural interpretation. This marks the fifth year cleverly costumed canines strut their stuff to celebrate Halloween. And maybe stopping to smell the roses!

Event details: Saturday, Oct. 20, 11 a.m. to 1 p.m. 1000 Lake Cook Road, Glencoe, IL 60022. Registration begins at 11 a.m. Parade starts in the Krasberg Rose Garden. Dogs must be on leash at all times and leave the Garden by 2 p.m. Viewing the dog parade is free. Anyone bringing a dog, whether entered in the parade or not, must pay the registration fee. Visit chicagobotanic.org/dog. For the eighth year in a row, canine competitors vie for top honors at the Howl o’ Ween Dog Parade. Prizes will be awarded for the most creative, funniest and scariest costumes. Will your favorite entry be boo-tiful or just creeping it real?

If this parade was a person, it’s one year away from being able to vote! This is the 17th year for the MainStrasse Village Paw-rade and will feature vendors, prizes for the best costumes and overall fun for both those with two legs and four. Previous categories have included best original costume and, for those less crafty, best store-bought costume.

Event details: Sunday, Oct. 28 at Goebel Park in Mainstrasse Village. The event begins at 12:30 p.m., and the Pawrade starts at 2:30 p.m. There is a $5 registration fee for each dog. Visit mainstrasse.org/calendar –events.html. This dog and owner go together like, well, you know. They won the Most Ocean City Spirit award in 2017.

This is the seventh year that dogs will be able to strut their stuff on Ocean City’s historic Boardwalk in festive style. (Cats, birds and other family pets are welcome, as well.) The event is free, and some lucky pups will win prizes. Monetary and pet supply donations will be collected to benefit the Worcester County Humane Society.

Treating a pup like royalty, this was one of the top finalists in the 2016 Sea Witch® Costumed Dog Parade.

Feeling a little deja-boo? This is the 29th Annual Sea Witch Festival! It features multiple events including carnival rides and a 5K race, along with, of course, the ever-pupular dog parade. According to a member of the Rehoboth Beach-Dewey Beach Chamber of Commerce, “This is such a dog town, everyone dresses their dogs up.” If that’s a typical day, imagine the outfits today!

Event details: Sunday, Oct. 28 (weather dependent). Registration begins at noon at the North end of the Boardwalk near the Henlopen Hotel. $5 fee per dog. The parade begins at 1 p.m. on the Rehoboth Beach Boardwalk at Lake Avenue. Visit beach-fun.com/sea-witch-halloween-fiddlers-festival.html.

This is the fifth year this parade will go on — rain or shine — with hundreds of dogs dressed to the nines. Organizers state this is Long Island’s largest pet parade, and they request all dogs be on a leash. (Which is good advice any time your dog is out and about, of course.) Nala the Pomsky won Cutest Costume as a “Puppuccino” at the 2017 Annual Doggone Halloween Costume Parade.

This marks the fifth year dogs will be walking the streets of Boston in their frightfully festive finest. They will be judged for cate-gory-s that include best costume, scariest costume, best human-dog duo costume and the most creative costume. No empty paws here — every pooch goes home with a prize!

Elizabeth Anderson Lopez is an award-winning writer based in Lake Forest, California. She and her husband have quite the menagerie, including a rescued English Bull Terrier named Maybelene.

Read more about Halloween and dogs on Dogster.com: