Next on The Scoop: We Found the Best Deals for Dog Lovers on Black Friday and Cyber Monday!

A Disabled Girl Will Keep Her Dog, and a Bad Law Will Go Away

After a national backlash, Moreauville has reversed its controversial breed-specific legislation.

Those of us who oppose breed-specific legislation got a small victory recently. Thanks to a nationwide backlash and an online petition, the village of Moreauville, Louisiana, now says that it will rescind an ordinance banning Pit Bulls and Rottweilers.

The ordinance is a very new one; it was passed on Oct. 13 and gave owners until Dec. 1 to get rid of their dogs. About halfway through November, Joanna Armand got a notice from the city giving her two weeks to find a new home for their Pit Bull, Zeus, or he would be taken into custody and euthanized. Or actually, “further disposition,” as the letter said.

The news was a blow to the entire family, but especially to Armand’s young daughter, O’Hara Owens. O’Hara suffers from extreme neck problems that require her to wear a halo brace and use a wheelchair. Although Zeus is not an official service dog, he’s O’Hara’s constant companion and lets the rest of the family know when she’s in trouble. “I can sit here if I’m in pain, he comes and he notices it before I even make any noise,” she told local television station KALB. When she has spasms or seizures in the night, Zeus will run to get O’Hara’s mother. 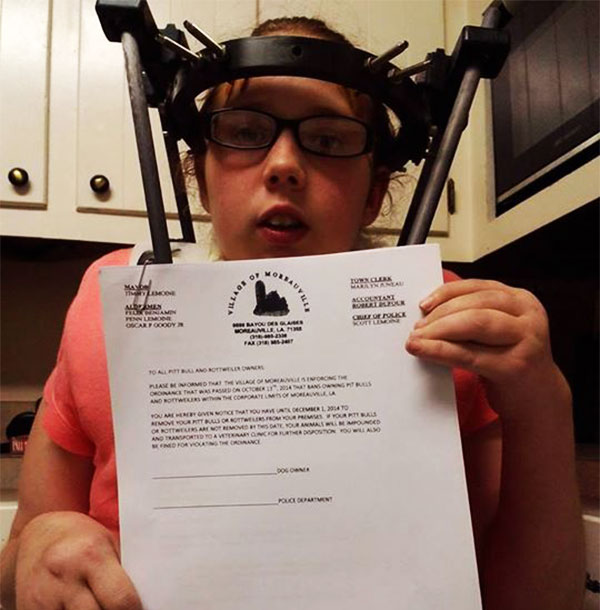 Armand set up a Facebook page called Saving Zeus to get her story out, and she set up an online petition. Both got immediate attention. When CNN reported on the story yesterday, the petition already had 40,000 signatures. As of this writing, it has 252,500. The story of Zeus, O’Hara, and the ordinance has been featured on CNN, The View, and USA Today. 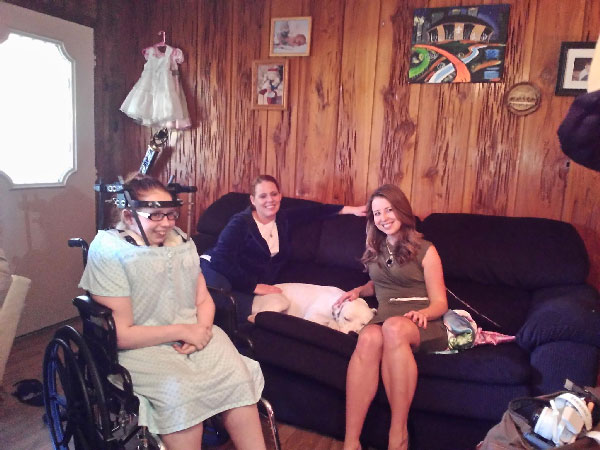 Within a few days, a small village of 950 people became known as the place that was going to kill a disabled girl’s dog simply because of the dog’s breed. After being one of the most outspoken public advocates for the ordinance and the village’s right to enforce it, Alderman Penn Lemoine blinked. “It was a mistake,” he told the Times-Picayune. “And it’s got to be redone and reworded. And this Dec. 1 date is not going to happen.” 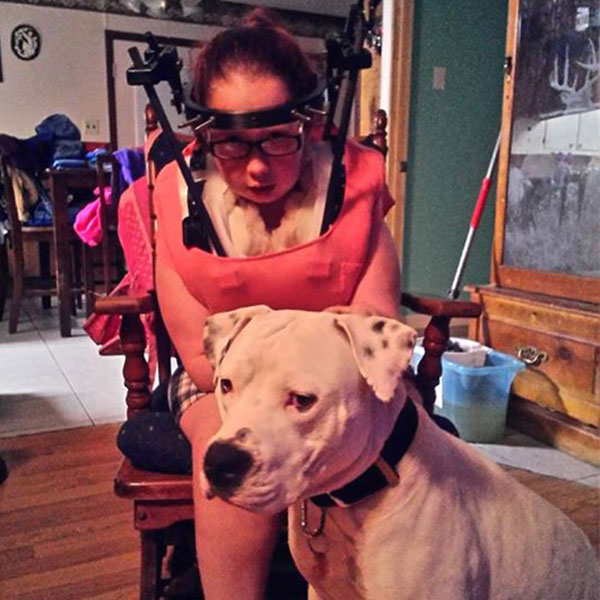 Originally, Lemoine had told the media that the ordinance was created to deal with pervasive complaints by citizens about dogs running loose. “We had several residents that were complaining about not being able to walk along the neighborhoods because these dogs were basically running along town,” he said in a phone interview with KALB. Now, he concedes that the city will have to find another solution, such as enforcing leash laws. “We’ll get legal counsel to help us formulate something that’s going to try to keep the dogs off the street,” he told the Times-Picayune.

Today doesn’t feel like a big day for justice in most places, but at least O’Hare Owens and her friend Zeus have gotten a little bit, as rare as that might be.

Via NOLA.com and CNN