Next on The Scoop: How Adorable Are These Pet Accessories From Puff Puff Paws?
Celebrity Dogs 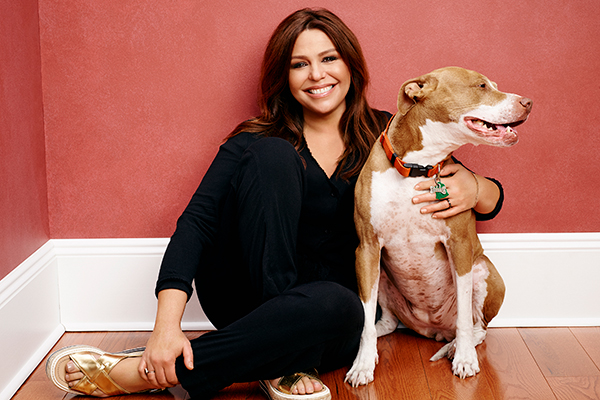 Tons of famous chefs love dogs as much as us regular folks. Come see some six of their adorable canine companions — and one very dog-like cat.

Celebrity chefs — they’re dog lovers just like us! Well, maybe they’re not just like us — some of us learned how to boil an egg eight days ago (not hyperbole). But when it comes to love for their pets, there’s no difference between Ina Garten and this guy. Here, we pay homage to the famous chefs who love their pooches as much as any rosemary garlic pork chop.

Rachael Ray has a long history of taking in and rescuing misunderstood Pit Bulls, giving them a life that any dog would envy. Her current Pittie, Isaboo, is frequently mentioned on the show, and there are several recipes like the peanut-carob Isabooscotti that are named in her honor. And no dog sits and gets rewarded as deliciously as Isaboo does, seeing as how Rachael Ray owns her own premium pet food line, Nutrish.

The Chew co-host who made his mark charring meats at Lola in Cleveland has quickly become a lovable fixture on daytime TV. When he’s not laughing maniacally every 13 seconds alongside Mario Batali, he’s giving lots of love to his doppelganger, Ozzy.

Speaking of The Chew, Mario Batali’s dog Willie most certainly had a better summer than you did. Not only is his dog-father behind some of the best restaurants and grocery stores in the country where seasonal fare abounds, but he rode shotgun on the family’s extended vacation alongside Molto Mario on the shores of Northport all season long.

Just for a moment, imagine being Ina Garten’s dog. How incredible would that be? I’m a believer in reincarnation, and my karmic goal is to be reborn as Barefoot Contessa’s next lapdog, spending lazy days in East Hampton eating whole wheat peanut butter biscuits and licking Jeffrey’s smiling face. Conspiracy theorists may think that sweet Jeffrey himself is an overgrown puppy masquerading as a human, but until that’s proven accurate, Winkie the Welsh gets the glory of being that lucky dog.

By any standards, Drew Barrymore fits the mold of a celebrity chef. 1) she’s very rich/famous and 2.) a quick Google search will reveal tons of recipes she’s created that people geek out over. She also owns her own winery, Barrymore Wines, and what’s food without a great wine to pair it with? Ms. Barrymore has a special relationship with her dogs Douglas and Lucy, as well as countless dogs she’s fostered throughout her adult life. She credits her canine companionship to helping her cope with difficult times, not least of which is figuring out a vegan taco that doesn’t taste like potting soil.

The Triple-D impresario is essentially the human version of a Golden Retriever, albeit with blonder, spikier mane. But let’s talk about his dogs Roxy (a Mastiff) and Cowboy (a German Shepard). No word on if their diets involve Guy-talian nachos, but one thing’s for sure: these dogs are quite happy living in Flavortown. A tiny bit of all of us wishes we were best fur friends with Guy Fieri.

This is a dog piece, but it’s my fiduciary duty as author to make sure you’re aware of Bobby’s orange Maine Coon, Nacho Flay. He’s bigger than most dogs I see around Lower Manhattan, so in the unlikely event he encounters a rabid French Bulldog in the West Village, my money’s on Nacho.