Until earlier this month, they lived their whole lives in cramped chicken-type coops in a backyard in Florida. Some died there. Then the the Sarasota County Sheriff’s Department seized more than 250 small dogs who’d been surviving in wretched conditions in what was a former puppy mill. The dogs were horrendously matted, and some had open sores, heartworm, hookworm, or all of the above. All were infested with fleas. Many had serious health conditions.

“It was a horrible situation for them to be living in,” Lt. Scott Ortner, county animal services director, said in an article in the Herald Tribune. 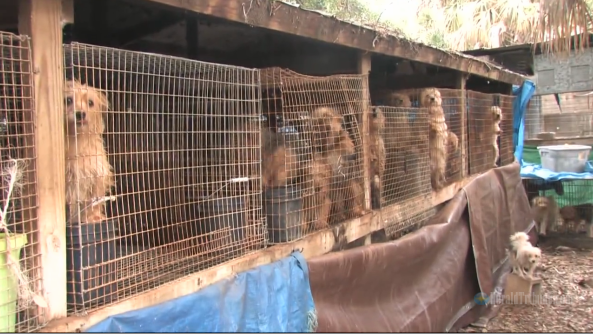 Economic woes and mental depression apparently turned the woman in charge of all this from breeder/puppy mill owner to hoarder. She backed off routine care, except for food and allegedly some medicine. Her husband says they still spent $1,200 a month maintaining the dogs.

“My wife developed hoarding as a symptom of her depression,” he told the newspaper. “It started slow and then it continued, and pretty soon you find yourself not looking at things.”

He said his wife has been having a hard time dealing with the removal of the dogs, and that despite appearances to the contrary, she was very attached to them. “It would be like someone taking your children,” he said. “We’re in the stage of trying to figure out what to do.”

If you want to see the place as the sheriffs did, you can check out this raw video footage from the department. But please note that it may be disturbing, especially when they discover a little dog skull.

Fortunately, many animal rescue groups, veterinarians, and boarding facilities have stepped up to help look after these poor pups for now. One of the most helpful is Florida Poodle Rescue.

I got in touch with the people (or rather, angels, as you’ll soon see) at the rescue for more information about the conditions of the dogs. Joani Kautz Ellis, shelter liaison, told me the grim reality. The group took the worst cases, the ones most other groups wouldn’t touch. Other rescues worked with them to lend a helping hand. 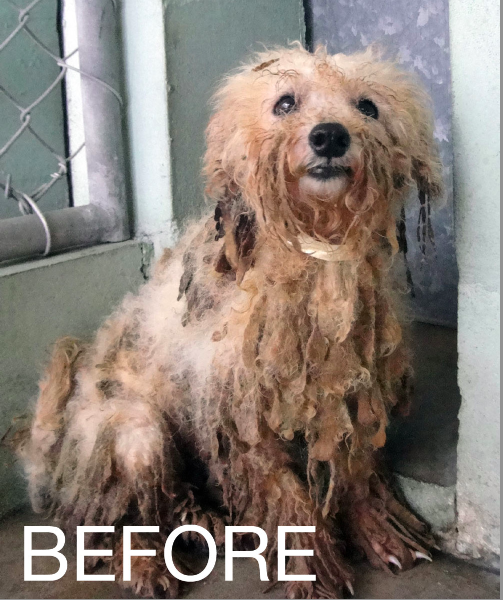 “Each dog we pulled has infected ears, internal parasites, anemia, [and] heavily tartared or broken and infected teeth. They also have coprophagia — they are not as interested in food as they are eating their own waste. The mature females have mammary tumors. Many have cataracts. They all seem friendly, just very timid of the world outside of a wire cage,” she explained.

One by one, the group’s volunteers have been cleaning up the dogs and getting them into medical care. Can you believe the dog below is the same as the dog above? 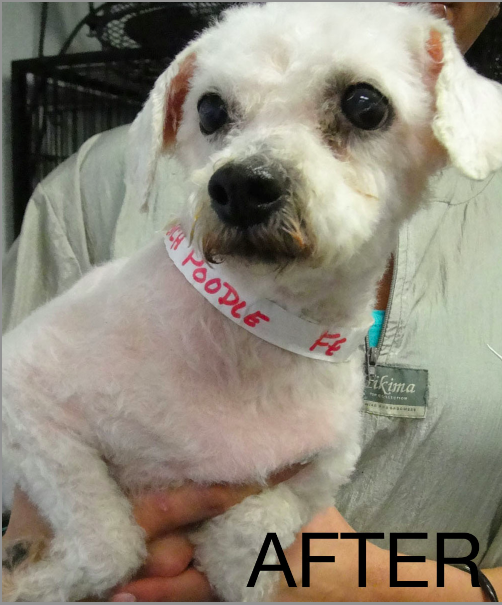 Joani has been doing this for 16 years. She says she never ceases to be amazed by what puppy mill owners and backyard breeders let befall their dogs. “These owners, as humans, have removed all humanity from these creatures.

“I have taken dogs from puppy mills who have their internal organs exposed to the outside, with their mouth and eyes matted shut, their jaws broken and hanging like a broken hinge, and cleaned them up, loved them, and apologized for what we, humans, had done to them,” she told me.

If you’d like to find your Kleenex now, I’ll wait. I would suggest getting one before reading on if you have a tender heart. 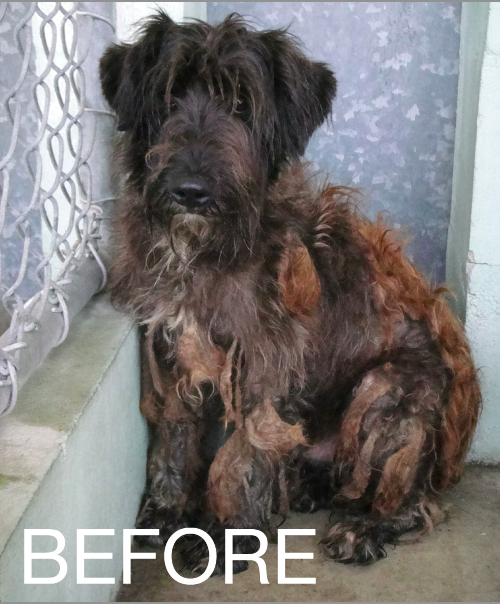 Joani told me, “Occasionally, we see the survivor who has survived the mill, but at such a great cost that they can never be brought around. These are the dogs that have endured so much suffering that they remind us of children who are abused, and survive by separating their mind from the body. These damaged dogs may never fully trust. Some ‘scurry’ instead of walk. One lived under a bed for four years before she was comfortable enough to come out and join the rest of the household.

“So where does that leave these poor souls? Most are still capable of living out a wonderful life. They need a structured environment, but most importantly, a home where they are accepted for who and what they are. They may never jump up on a couch, never understand the use for a toy, but you will see them show joy and unconditional love. You’ll hear a heavy sigh when you hold them close. To them, those small comforts alone are pure bliss,” she said. 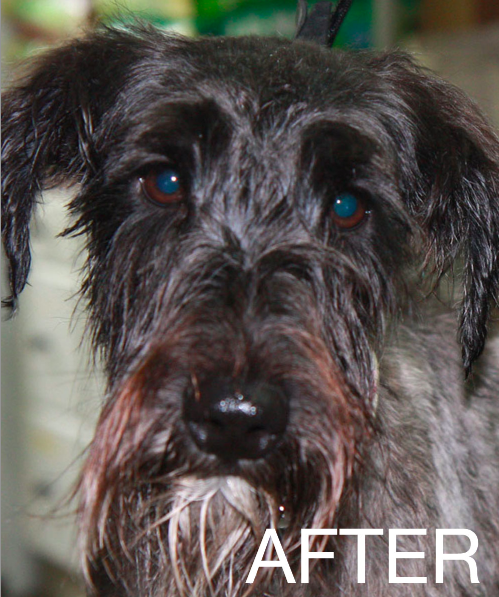 “These ‘special ones’ are the ones that normally never leave their foster homes. Ironically, these types of dogs normally do very well in a group-dog setting. Whenever we suspect that a mill rescue may be too far gone for a fast-paced family, we try to place them in experienced homes, quiet homes, or homes with other dogs. These are by far the hardest ones for our hearts to accept, but they are also a constant reminder of why we do what we do. Florida Poodle Rescue always needs more homes for these special ones.”

The organization also has a few hospice homes very ill rescues can go to. “These dogs often live a long life, and bring many smiles and laughs when we sit around and talk about out ‘special’ furkids. We also take in the extreme old ones that are dumped in kill shelters,” Joani said. 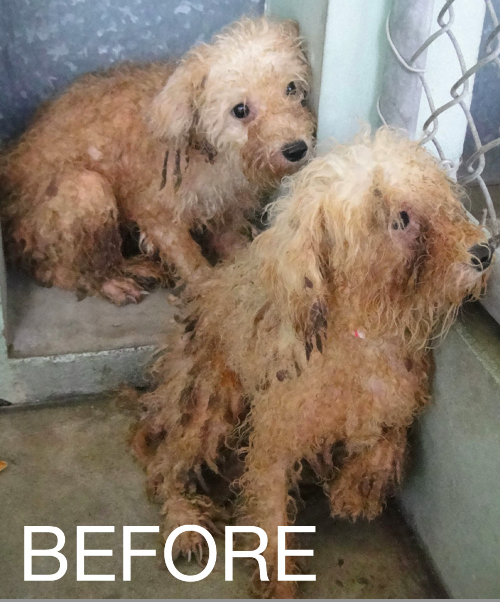 And then there are the “ancient ones.” (Get your tissue ready.)

“The ‘ancient ones’ we bring in, bathe, and give soft food and warm blankets. Often they are too ill and old, and for some ungodly reason they were dumped by their family at a shelter. When it is their time, they get a cheeseburger all to themselves, and many get chocolate ice cream. (We believe all dogs secretly want chocolate ice cream but never get it during life, so what a great thing for their last meal.) Then comes the hardest part, to hold them and whisper in their ears that they were good dogs, and they were loved.

“These are ones that people don’t really know about, because it is so hard to hear. We just hope someday, someone will let the public know about these ones.”

I am honored to do so, Joani. Readers, please, if you have it in your heart and temperament to take in one of these “ancient ones” from any rescue group, just ask. They’re probably there. They’re just not exactly advertised. 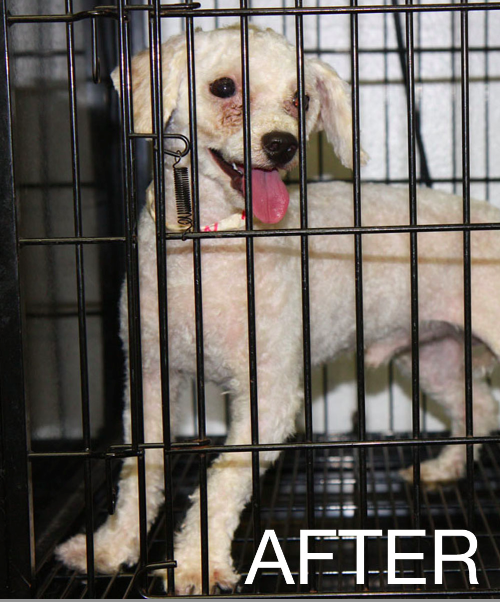 I asked Florida Poodle Rescue board president Patricia Donati how it feels to deal with these mills year in, year out.

“It makes me angry and sick to my stomach,” she said. “Sometime, we hate our phone. It never stops ringing. We answer and listen to the horrible accounts of animal abuse. We all shudder, and scribble unspeakable details on a scrap of paper. Often we arrive at the location and wince, because it’s worse than we expected.” 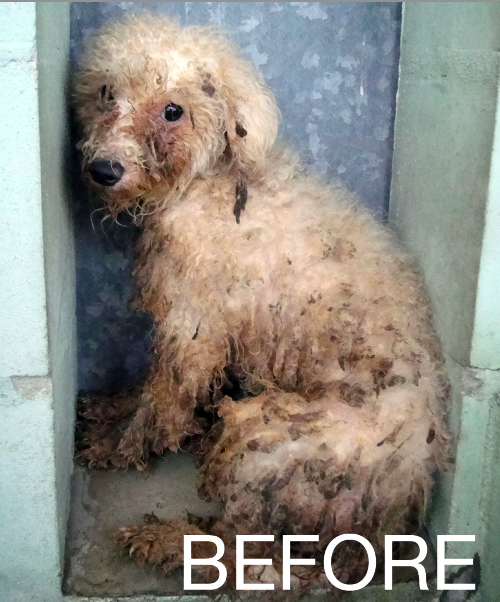 She wishes that everyone could learn about puppy-mill dogs so they’ll make wiser choices when getting a dog. “Puppy mills are driven by the almighty dollar. As long as people can profit from them, they will continue,” she said. 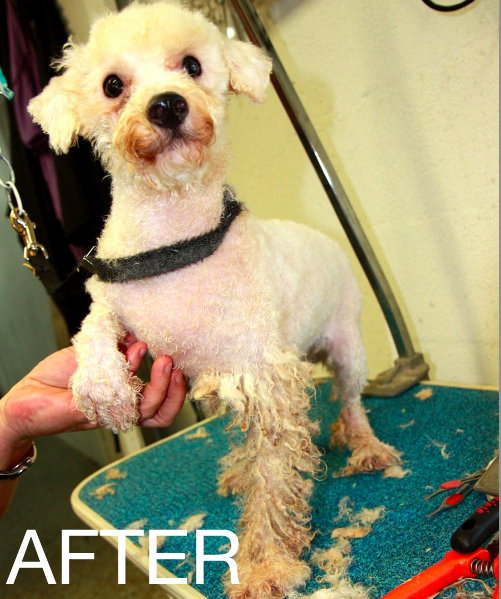 In looking at these amazing before and after photos of the Sarasota dogs, I wondered how it made Patricia feel to know her group has been helping give back life to these dogs.

She told me she feels both pride and honor. “Rescue is the most incredible, rewarding job in the history of ever,” she said. “At the same time, it’s also the most heartbreaking. I am so proud of our group for what we accomplish. We rescue dogs. In turn, dogs rescue us. Everything in between is so worth it.”

Before and after images provided by Florida Poodle Rescue.