Next on The Scoop: Meet Phileas Dogg, the World’s Foremost Canine Travel Website

4 Things I Love About the Positive Training Method for Dogs

Positive training changed the lives of me and my dog, and I thank TV dog-trainer Victoria Stilwell.

I stood there with a big, goofy, cat-who-ate-the-canary grin plastered on my face. As I waited for my friend to snap the picture, I replayed in my head the brief conversation I had had moments earlier with the woman next to me. Had I come off sounding like a complete idiot? Probably. Because, you know, that’s how I roll when I meet someone I admire.

In this case, that someone was Victoria Stilwell of It’s Me or the Dog fame. Some people have super fangirl crushes on movie stars or musicians. I have them on individuals who make life better for animals. In the cat world, my biggest crush is Jackson Galaxy. In the dog world, it’s Ms. Stilwell. 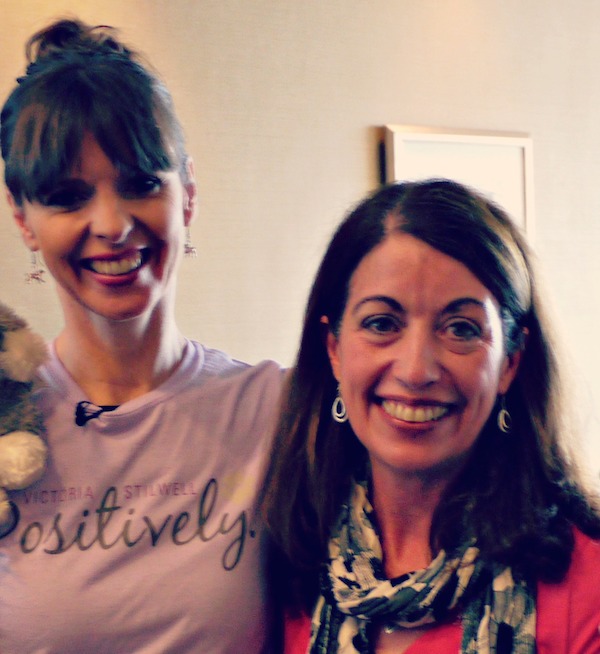 Just prior to the picture-taking moment, I had listened with rapt attention to a passionate keynote address Ms. Stilwell delivered to a room full of pet bloggers, advocates, rescues and business people. Whether striding confidently across the stage or planting herself to drive home a point, her message came across loud and clear: positive training is effective and good for dogs and humans.

After the applause ended, I, along with another super fangirl/friend/fellow writer, jumped up to be among the first in line to meet her and ask for her autograph. (As an aside, the aforementioned friend is now a contributor to Victoria Stilwell’s blog. Of course, this makes me incredibly jealous and I could totally hate her for it if she wasn’t such a ridiculously awesome person and writer. But I digress.)

My friend and I chatted nervously in line while waiting our turn. When mine finally came, I was delighted to learn that Ms. Stillwell is just as lovely in person, inside and out, as she is on TV. She didn’t rush me along and listened patiently to a condensed version of why I appreciate her so much. 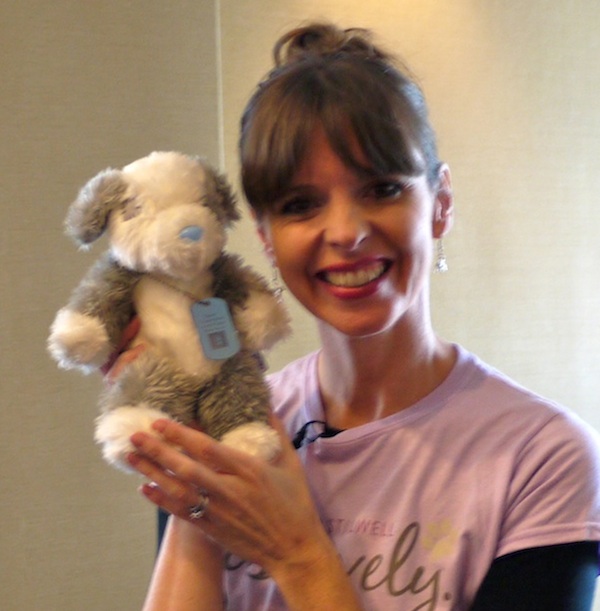 Many years ago, not long after we adopted our first dog Ranger, I tuned into a popular dog-training TV show. Because I was a new dog parent and knew almost nothing about training, I was an open book and eager to learn. The very first episode I watched centered around a dog who barked madly each time the toaster popped up. The trainer declared the dog was trying to control things, and then cornered the animal and began popping the toaster up over and over and over again. The dog tried desperately to get away and then eventually just gave up and shut down. At this point, the trainer told the dog’s owners that he was cured of his toaster-domination problem. 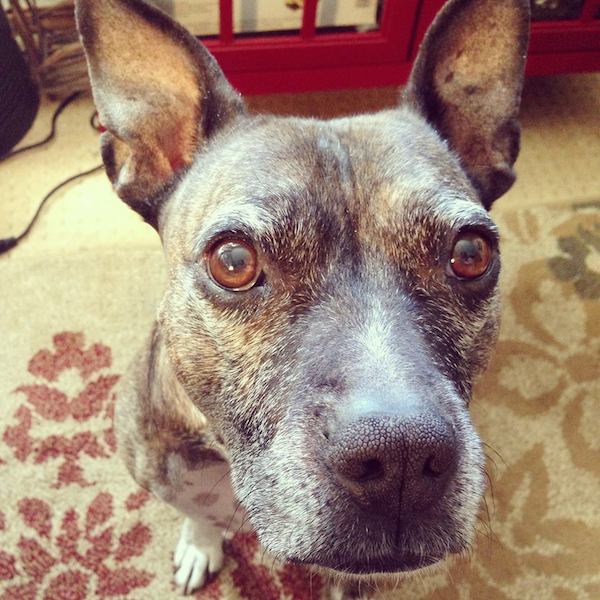 I didn’t know then that this technique is called “flooding” and that even when it is used on humans, it’s typically less effective and more traumatic than systematic desensitization. All I knew then was that it instinctively felt wrong. I never watched another episode. In fact, I swore off TV trainers altogether. Then I started hearing buzz around a show starring a British woman named Victoria something. Hesitantly, I tuned in.

Instantly, I knew this show was different. The woman used this crazy thing called a “clicker,” for one. And even though she was a dog trainer, she put the emphasis on educating the human holding the leash. What a concept! I was hooked.

This show and Ms. Stilwell’s method of training came at the exact right time for me. A short time later, we adopted our dog Mayzie. In a recent Dogster article, I discussed how fearful Mayzie was when she first came to live with us and what I’ve learned from our journey together. What I didn’t talk about was how essential positive training was in helping her become the dog she is today.

Here’s what I love about positive training:

When Mayzie first came to live with us, it was important that she knew she could trust me. Through our training sessions, she learned that I’m predictable. She also discovered that I was never going to get mad or yell or yank her around on her leash, and that I was never going to put her into a dangerous situation. She is now willing to step outside her comfort zone and try new things because she trusts that I will keep her safe.

Positive training (and especially clicker training) is wonderful for fearful dogs like Mayzie because it shows them that they have some control over their world. (This should not be confused with “dominating” said world.) She knows that if she sits or spins or does a down-stay, she gets rewarded. The more “tricks” she learns, the more her confidence grows. It’s been truly amazing watching her come out of her shell and blossom. By the same token, I’m a much more confident dog handler now than when I first started, which allows me to help my dog even more. 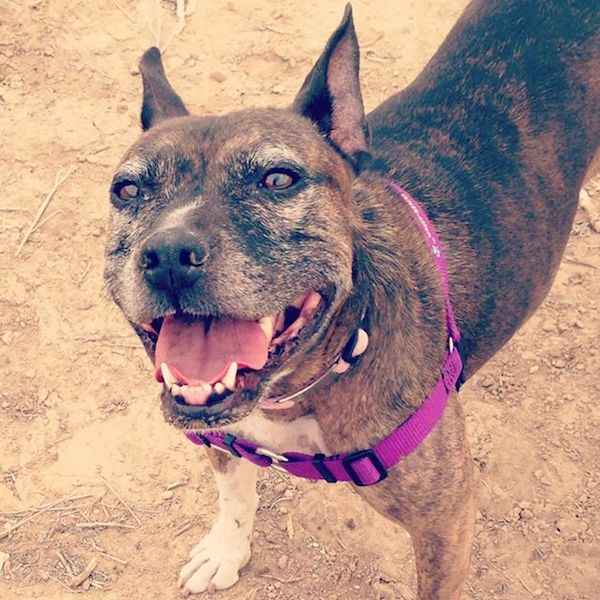 Through positive training, Mayzie and I have become a team, learning to communicate with and listen to each other in multiple ways. For example, in one of our training classes, which Mayzie typically loves, she seemed reluctant to work. Not only that, she was avoiding eye contact with me, yawning and licking her lips. It was odd and unsettling but suddenly I realized what the problem was. Me! That evening I was tired, tense and my patience was thin. Mayzie of course picked up on that and was sending me doggie calming signals. Once I figured it out, I took a moment to re-center myself and release the tension I’d been feeling. It worked like a charm and the rest of the class was fun and productive. Because our communication is reciprocal rather than just one way, training sessions are easier and more enjoyable.

Because positive training methods don’t assume that dogs are trying to gain alpha status, it creates an atmosphere that allows for experimentation, mistakes and laughter. For example, on our graduation day from intermediate obedience, Mayzie had to perform a “leave it.” I felt confident because she was rock solid on that command. When it came our turn, I placed the treat on the floor and said, “Leave it.” To my surprise, however, she immediately gobbled up the treat and looked at me like, “You said ‘EAT it,’ right?” I, along with the rest of the class, burst out laughing. I knew she wasn’t trying to “overthrow the government.” She was just being a dog. And a very funny one at that. 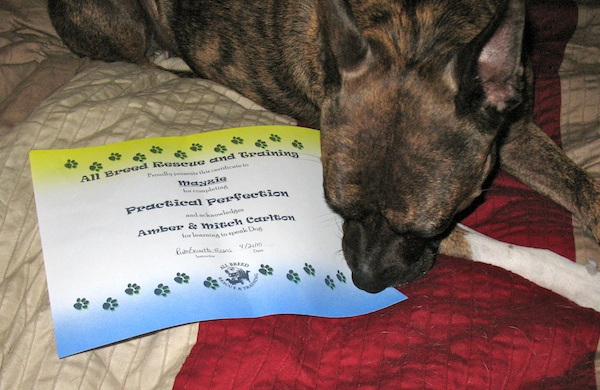 I honestly can’t imagine using any other training method with Mayzie and being as successful as we have been. It was clear from the get-go that she wasn’t trying to dominate or manipulate me. She was scared. Plain and simple. And Ms. Stilwell, through her show, let me know there was hope. Words can’t begin to describe how grateful I am that I found her when I did. Because of her, a whole new world opened up to me. Because of her, I sought out a positive trainer to help Mayzie. And because of her, today my formerly frightened dog is living a happy, full life.

And because of that, I am a Victoria Stilwell super fangirl forever!

Your turn: What’s your favorite thing about training with your dog? Are you a Victoria Stilwell super fangirl? Tell us in the comments!

About the Author: Amber Carlton is a freelance pet industry marketing copywriter and content specialist for hire who also acts as interpreter and typist for her dog’s musings at Mayzie’s Dog Blog. She shares life with her husband, two dogs and two cats (all rescues except for the husband). Connect with Amber at her business website or on Twitter, Facebook or Google+.