Next on The Scoop: What Would You Do if Your Dogs Confronted a Cougar?

Do Your Dogs Have Sensitive Stomachs?

We have to monitor what my boy Kramer eats or we'll be cleaning a mess. Sound familiar?

By the time we brought Dusty home at two months of age, I had already done plenty of research on different types of food. I researched the premium brand canned food, kibble, dehydrated, freeze dried, raw and homemade diets. It had been 20 years since we had a puppy and a lot had changed in puppy diets since then. All of our other dogs we adopted were past their initial puppy stage. After my extensive research and on the advice of a local veterinarian and nutritionist, I decided to go with a homemade diet that I read about from a Hawaiian veterinarian nutritionist name Dr. Basko.

The diets were based on a healthy boiled protein, combined with fresh vegetables and a seaweed and kelp mixture. The recipes he illustrated in his book allow you to choose different types of proteins, vegetables and antioxidant mixtures based on the dog’s lifestyle, climate and age. It was actually fun for me to cook and prepare her meals daily and she thrived on the fresh food that was being provided. I also didn’t have to worry about pet food recalls or too much grain being added to her diet. I knew exactly what she was eating. 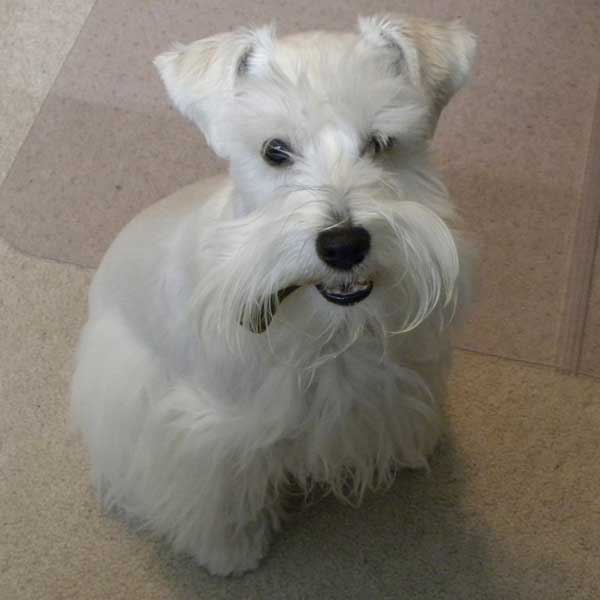 A year later we adopted our boy Kramer. He was born at a breeder’s home, sold to a couple, returned to the breeder, adopted by a rescue where he was fostered in two wonderful homes, and then brought to his forever home with us. He was 15 months old when we adopted him and had already lived in five different homes. He is a brilliant and handsome boy that is still trying to figure life out. He is sweet and gentle with us and his new sister Dusty. However, it takes a long time for him to warm up to others who visit or that he meets in public.

Along with his overall sensitive nature, he has an extremely sensitive stomach. The first few days with us was a nightmare of diarrhea from him being so nervous. It was the worst case of uncontrollable bowel movements I had ever seen. It looked like something out of The Exorcist! 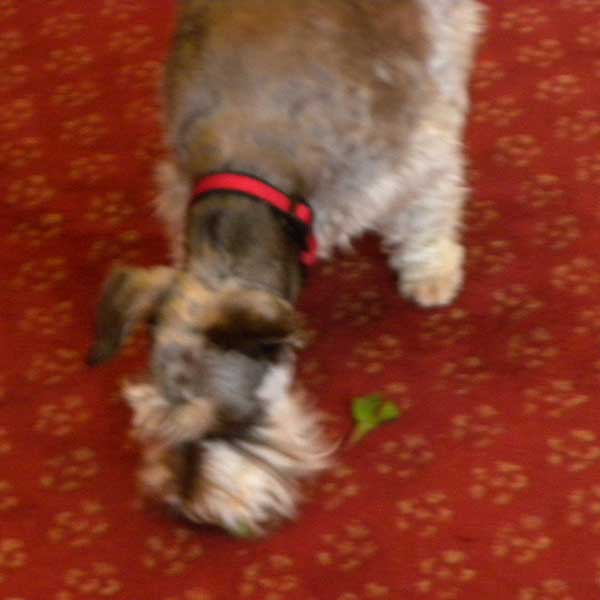 I have learned never to switch a dog’s food immediately to another type or brand. The process needs to be slow and steady over a few weeks time. Start with slowly introducing a small amount of the new food mixed with his present food. After the first week increase the new food by a third, mixed with the present food. Each week increase the new food by a third until you are 100 percent on the new food. This also works out well since her present food should be empty by then and you don’t have to throw it away. I figured this would work well with Kramer, especially since I had little clue of what he was eating at his previous stops. I only had a small bag of what the last foster family was feeding him. Fortunately, it was a decent food from Wellness. 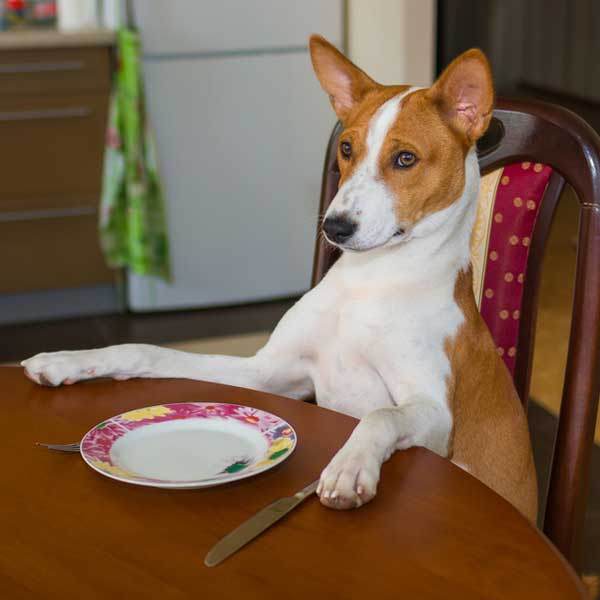 I started mixing in the new fresh food that Dusty was eating with Kramer’s present kibble. Kramer immediately loved the fresh beef, fish or chicken that was cooked for him. He would sit within two feet of me while I prepared it at the stove. He wasn’t quite sure about all the veggies, since they were likely foreign to his diet. He often looked at them and then looked back at me as if to say, “What the heck is this stuff, man?” He eventually decided that bell peppers were acceptable but, forget the romaine lettuce, carrots or broccoli crowns. Yuck! Vile weeds! 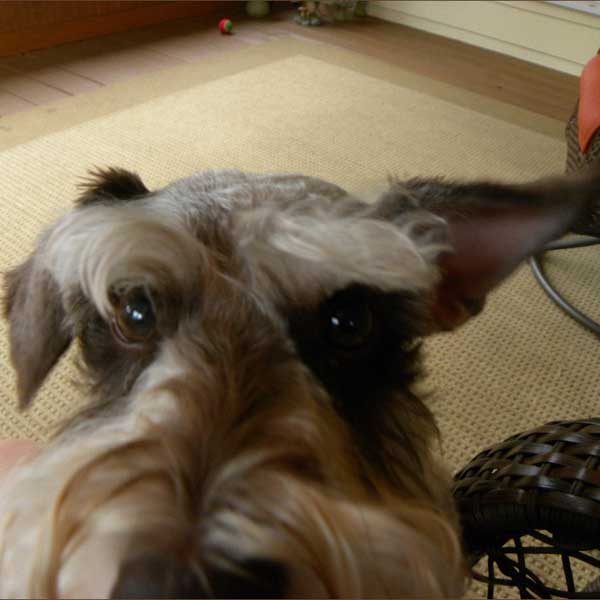 The first week turned out okay and he was adjusting to his new diet. Then, he suddenly digressed and developed diarrhea again. Fortunately, I didn’t have to call in the priest this time since his bowel movements were not projectile. However, I knew something in the mix was not right. We had visited the veterinarian a couple of times regarding this and nothing was found to be medically wrong with him. He simply has a very sensitive stomach.

I started to realize, as much as he loved the fresh protein in his diet, his stomach would not tolerate much of it. Through trial and error it was determined that the higher fat content found in some proteins, food and treats was causing him issues. It wasn’t the fact that he was overweight himself. Quite the contrary, since he is at his ideal weight. It’s simply that his body doesn’t process fat as well as it should.

So, back to the doggie food research studies it was for yours truly. I reviewed the best ranked foods that were low in fat and listed on Dog Food Advisor’s website. This is an independent site that evaluates all brands and types of dog food on the market. They list the ingredients for each food and red flag by-products and fillers. They list the protein, fat and carbohydrate percentages for each food. Then they rank the foods based on a five star rating, with five stars being the best. It really is an excellent site full of wonderful information on dog food. 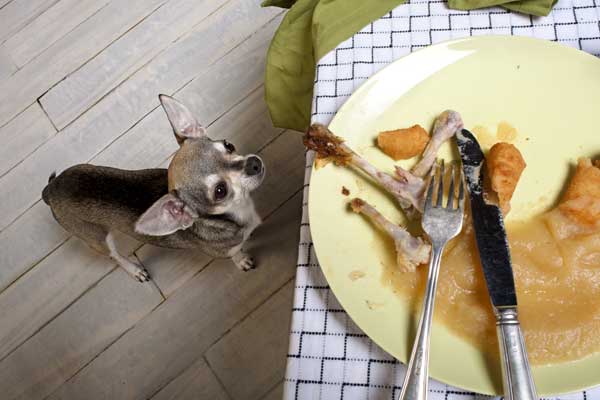 We tried several brands of food that were low in fat. Most had very little taste and were not very well received by my finicky little furry man, despite the fact that he loves to eat and get treats. We found one brand that was ranked five stars, was low in fat and received four paws up from both our Schnauzers. It was Fresh Pet. Its Vital brand is grain and potato free as well. The food can be found in most major pet food retailers and grocers. It is a fresh refrigerated product available in rolls or pre-cut bites. We like to mix it with some fresh veggies, but it is not necessary since it has key vegetables and fruits inside the product.

Since finding the right food and Kramer becoming less sensitive to his surroundings, all is well in his world. He is happy with his new home, his new sissy and his mom and dad. His belly is very happy, too!

Do your dogs have sensitive stomachs? Do you have to feed them special diets? Share your stories and pictures in the comments!

Read more on feeding your dog: