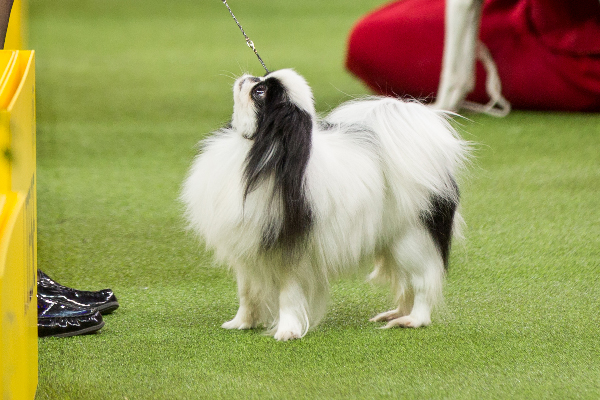 The Look of a Japanese Chin

Bred for hundreds of years to be the ideal companion dog, Japanese Chins are pleasant, charming, devoted and loving. They form strong bonds with their masters, but also show great love and affection for the entire family—and friends, as well. Japanese Chins bring a dignified element to any household.

Very obedient and dependable, Japanese Chins can also be sensitive. They love to be the center of attention. Above all, they crave attention, love and positive feedback. Chins get along very well with children, but they probably won’t appreciate rough play or extremely loud noises. Keep in mind: these dogs lived in palaces for hundreds of years; so, they will expect good manners from everyone. But they also know how to let loose and wrestle a squeaky toy on the rug.

Japanese Chins don’t require too much exercise, but they will benefit from daily walks around the block. They are also quiet and clean, sometimes grooming themselves like cats. Japanese Chins are the perfect apartment dogs.

A healthy Japanese Chin can live as long as 10 years. Common health issues include heart and joint ailments. Also, because of their short muzzles, they may develop breathing and respiratory problems. Their long, silky coats benefit from daily brushing. You might also consider the occasional professional grooming to keep things looking great. Remember to check your Japanese Chin’s eyes and ears regularly for infection.

The Japanese Chin actually originated in China. Cherished by Chinese nobility for centuries, these cute little dogs could not be purchased—one had to be a member of the aristocracy to own one. No one knows for sure how Chins made their way to Japan, but some dog enthusiasts believe that they were a gift from Korea to the Japanese court. In the mid-19th century, several Chins were given to Queen Victoria, and eventually the breed caught on in England and the United States.

Read more about the Japanese Chin on Dogster.com:

Get to Know the Japanese Chin: Rare Gem of the East