Next on The Scoop: Meet Pet Artist Jay McClellan 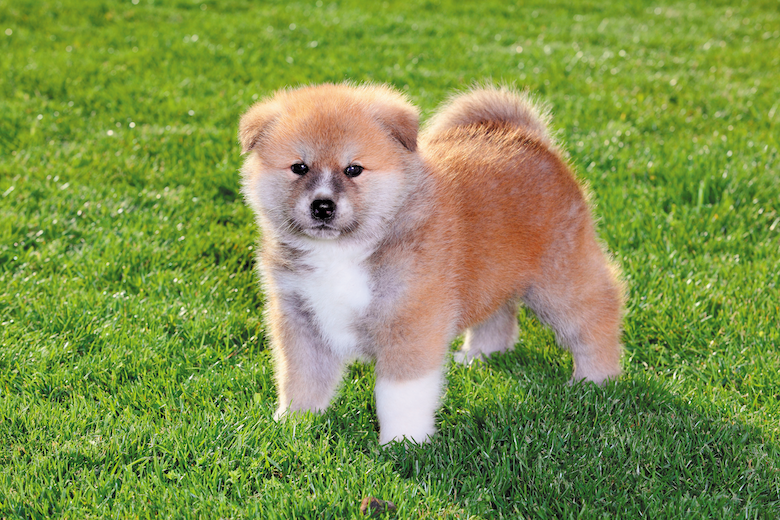 Bred to be courageous hunters, Akitas have powerful personalities. They need an owner who can devote time, patience and training.

Bred as an adaptable hunting and guard dog, the dignified Akita is respected as a national treasure in Japan. These days, Americans adore the breed, too — the Akita consistently ranks in the top 50 most popular breeds. Although a devoted watchdog, the Akita doesn’t bark excessively. He’s the strong, silent type of hero.

An ancient, revered breed along with breeds such as the American Eskimo Dog, Chow Chow and Samoyed, Akitas are a Spitz breed. Spitz breeds generally have a wolf-like appearance with a double coat, almond-shaped eyes and a love of snow. Akitas originated in the mountains of Japan, developing webbed toes to distribute their weight and walk easily on snow. Before Akitas had a formal breed name, they were simply referred to as snow country dogs.

Bred for courage in the hunt, Akita forefathers tracked game such as boar, elk and bear, holding their quarry at bay until the hunters caught up. Akitas also were developed as watchdogs. In time, Akitas became valued palace guards. Their decorative collars were associated with the nobility and rank of their owners.

Unfortunately, as dog fighting became popular, the Akita was also developed for dog aggressiveness. In time, the Japanese government outlawed dogfighting and named the Akita a national treasure.

When Helen Keller visited Japan in 1937, the Japanese Foreign Minister gifted her an Akita named Kamikaze-Go. After the pup died at an early age, the Japanese sent Keller a second Akita, Kenzan-Go. After WWII, returning soldiers brought Akitas back to the United States; these post-war dogs laid the breeding foundation for the American Akita.

Weight: 100 to 130 pounds (male),
70 to 100 pounds (female)
Life Span: 10 to 13 years
Coat: Double-coated. The undercoat is thick, soft and shorter than the outer coat. The outer coat is straight and harsh. Akitas adapt well to cold climates, but fortunately, their coats lighten in the summer.
Color: Any rich and brilliant color, including pinto, white and brindle
grooming: The Akita needs regular brushing and extra grooming when he blows coat (which happens a couple of times a year). As the new coat grows into place, big tufts of hair loosen and fall out (or are brushed off). The Akita self-grooms in a rather cat-like manner.
Tail Tale: A large, curled (not plumed) tail is one of the Akita’s trademark features.
equipment: A fenced-in, private yard is ideal for the Akita; he’s too strong and dominant to mingle with animals he doesn’t know at the dog park.
Varieties: There are two separate varieties of Akita: a Japanese strain, commonly called Akita Inu, and an American variety we call the Akita.
Breed Policies: Unfortunately, the Akita has been a target of BSL as well as HOA and apartment prohibitions. Prospective owners do well to check out local laws and housing policies.
Best For: Experienced dog owners. Singles and families must have the knowledge and experience to
handle this rather complicated breed.
Possible Health Issues: Bloat, thyroid issues, canine hip dysplasia.

Life with an Akita

Loyal to family and suspicious of strangers, the Akita isn’t the best fit for newbie dog owners. While intelligent and quick to learn (when he chooses!), the Akita’s respect must be earned; training may be a challenge. The independent Akita, after all, likes to think for himself.

Although some Akitas may excel in obedience, it’s not likely their hobby of choice. Most Akitas much prefer hiking or outdoor play. Akitas require exercise, but they don’t beg for nonstop action. In fact, a solid walk and a few playtimes suffice.

Akitas are content in a one-animal-only family; their renowned faithfulness is typically focused on their human owners. Many Akitas aren’t tolerant of other dogs, especially same-gender dogs.

Originally bred as protectors, Akitas are instinctively wary of strangers. They do well to learn early on, with intensive socialization, the difference between a friendly newcomer and an unwelcome stranger. Teaching the young Akita how to handle his own protection drive and discern friend from foe involves rigorous socialization strategies and training. Puppy school, here we come!

Read Next: Get to Know the Akita: Monumental Dog of Japan