Next on The Scoop: All About the Rhodesian Ridgeback
Dogs in Art 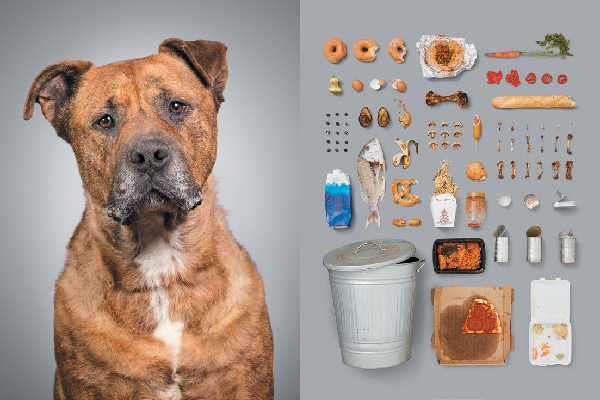 Dogs have been commonplace in art for centuries — Picasso lovingly drew his Dachshund, Lump, while hairless Mexican Itzcuintli sat for portraits with Frida Kahlo. But yet, you might be hard-pressed to find dogs represented in contemporary photographic works. A new series from California photographer Alícia Rius, called A Dog’s Life, aims to change that.

The Dogs of A Dog’s Life

In A Dog’s Life, Alícia photographed six dogs in a studio setting, selecting dogs she found on the street (while walking her adopted Chihuahua mix, Riff), through friends or a series of neighborhood ads. The result: a portrait of the dog paired with a telling overhead image of items, personalized to each dog. (That trend of neatly arranged minimalist photography is called “knolling,” Alícia explains.)

In one image, Magda, a 14-year-old Cocker Spaniel-Dachshund mix, is posed against a turquoise background, juxtaposed against a second image featuring prescription pill vials, X-rays, a plastic e-collar and other veterinary tools.

“These aren’t the dogs’ personal possessions,” Alícia explains. “But they are the daily objects that shape their routine. You understand what the dog is going through or what they’ve gone through. Looking at the objects, you can understand how the dog’s life looks at that very moment.”

How Alícia Got Into Pet Photography

Alícia grew up in Spain and began working as a photography professional when she moved to San Francisco with her husband in 2013. “My husband had a big opportunity, and I thought I needed to take this as a chance to reinvent myself,” Alícia says. “I had wanted to be a full-time photographer for quite some time, and I had some recognition that what I did made people feel.” She then discovered the world of pet photography. “I thought, ‘Animals and photography — this is for me!’” she says.

A closer look into the genre left her disappointed — most shoots were overly stylized and cutesy. “I saw lots of ducks in hats and glasses,” Alícia laughs. “I thought there has to be a better way to photograph animals — a way that really respects them and elevates their beauty.” To develop this series, Alícia considered the different breeds she wanted to use and envisioned personas for each. For example, her street dog — played by Marmaduke, an 8-year-old Shar Pei-Pit Bull mix — was conceived as a scavenger, hunting for his next meal.

When you look at Alícia’s images, you can’t help but smile: The colors are cheerful and uplifting, while the neat knolling arrangement is tranquil and pleasing to the eye. But, of course, the most important part is the dog. “When looking at this series, you will first see the dog and his gaze, then you will look at the objects,” Alícia says. “Suddenly, that gaze you just saw one second ago will become a gaze with impact and meaning.”

Laura Ratliff is a writer specializing in travel, lifestyle and food. Her work has appeared in Architectural Digest, GQ, Bon Appétit and Condé Nast Traveler. She lives in Brooklyn with her husband and her two dogs — Iggy, an 11-year-old Brussels Griffon, and Kate, a rescued 2-year-old German Shorthaired Pointer.