Next on The Scoop: We Pit the Kong Classic Flyer Against the K-9 Flyer and the Chuckit! Flying Squirrel

Canine distemper is a dangerous and lethal viral infection, but it can be prevented by vaccine.

Distemper in dogs, or canine distemper, is a viral disease that can be lethal when contracted. The word “distemper” derives from ancient and medieval humoural theory, and simply means that the humours — mythical fluids thought to keep the body in harmony — were out of balance. The reality of distemper in dogs is much more complex and dangerous. Because vaccines are readily available, distemper can be prevented; however, in remote areas, or places with high concentrations of stray dogs, distemper can be a real problem.

Let’s talk about distemper in dogs, how it’s caused, how it spreads, and how to keep your dogs safe!

Distemper in dogs is caused by a virus, often called the canine distemper virus, which also affects other small-to-medium sized wildlife and is spread most frequently through inhalation, but can also be picked up through contact. Don’t worry about cats, though, as feline distemper, while just as dangerous, is not the same virus. Similarly, dogs are not affected by the feline version. Those with pet ferrets, though, should be cautious, because distemper can be transmitted to dogs from ferrets that are carriers. 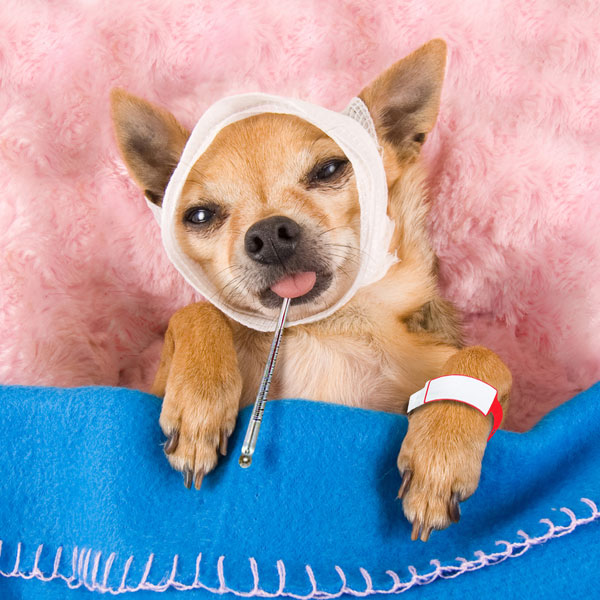 Distemper in dogs is spread most often through inhalation of the virus, primarily when a dog is around the urine and feces of infected animals, including other dogs, foxes, and raccoons. Contact with or sniffing at any bodily fluid, including blood and saliva, can transmit canine distemper, and is primarily virulent in puppies, older unvaccinated dogs, and dogs with weakened or compromised immune systems. Dogs who are neglected or abused, particularly dogs in puppy mills, are also at greater risk.

Distemper in dogs strikes quickly — less than a week after transmission it can spread from a dog’s lymph nodes to affect the lungs, brain, spine, and the digestive tract, wreaking havoc everywhere it goes. There is no cure for distemper in dogs, making vaccination the key to prevention. The acuteness and severity of the symptoms and the effects of distemper in dogs depend on many factors, including age, general health of the infected dog, and the environment — even the weather. 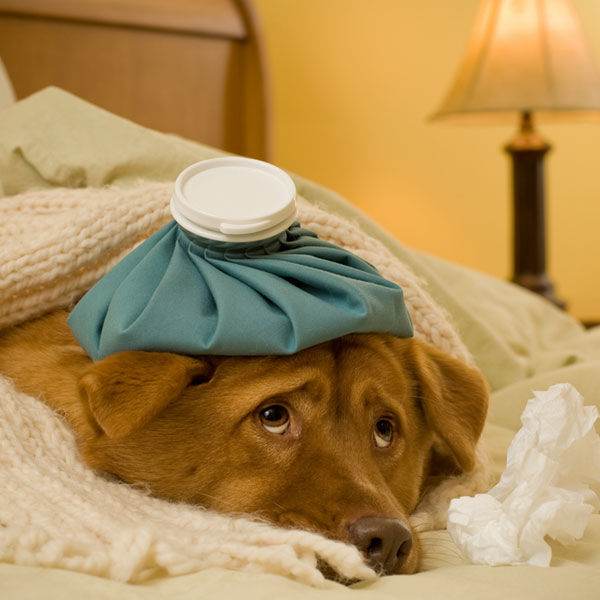 Less than a week after inhaling or making contact with the canine distemper virus, distemper symptoms begin to manifest. The first is a high fever, which begins to affect a dog or puppy within a few days of infection. Temperatures of a dog with distemper are generally over 103 degrees, and are accompanied by other initial symptoms, including clear discharges from the eyes and nose. In this early stage of infection, distemper symptoms are largely associated with cold symptoms, affecting a dog’s eyes, nose, and throat before moving into other critical systems. The fever abates after a couple of days, only to return for longer in the second week. 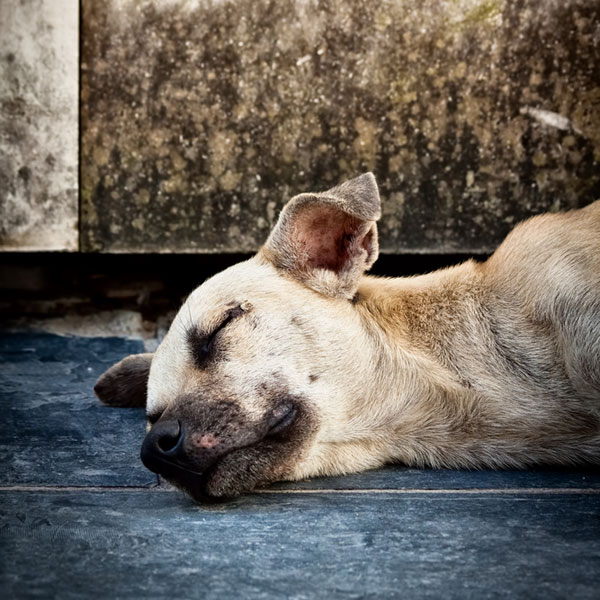 After a week, that discharge from the nose and eyes can go from being clear to being yellow, thick, and crusty. By this point, canine distemper may have begun to affect the digestive system. Distemper symptoms in these cases manifest as vomiting, dog diarrhea, along with symptoms associated with these, including rapid dehydration, less of an appetite, and weight loss. Distemper in dogs can also lead to a persistent cough.

Two to three weeks after infection, canine distemper may also begin to affect a dog’s brain and nervous system. The canine distemper virus causes swelling of the brain and spinal cord. Symptoms of distemper at this stage of infection range from spasmodic muscle twitching on the low end to seizures or paralysis in severe cases. Other symptoms of advancing distemper in dogs include pus-oozing sores on the dog’s abdomen and what is referred to as “hard-pad,” which shows up as a stiffening of the tough but normally pliable pads at the bottom of a dog’s feet. 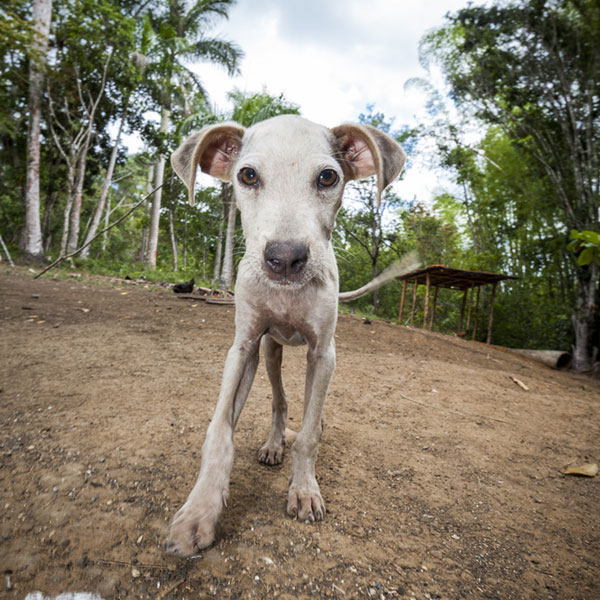 Depending on the strength of the canine distemper virus, a dog’s susceptibility to it, and the strain of the symptoms that manifest, distemper in dogs may resolve on its own. A dog that is treated and manages to recover from canine distemper may still suffer from occasional trembling or seizures even months after recovery. Dogs that have fully recovered will not carry nor spread the disease afterward. Unfortunate dogs, on the other hand, may die within five weeks of infection.

Again, there is no cure for distemper in dogs, which, along with parvo in dogs, are the two most common, deadly, and yet preventable viral diseases in dogs. Diagnosed early enough, veterinarians may prescribe antibiotics to treat secondary infections. The best and most reliable preventative measure dog owners can take is to make sure that puppies and dogs are vaccinated. 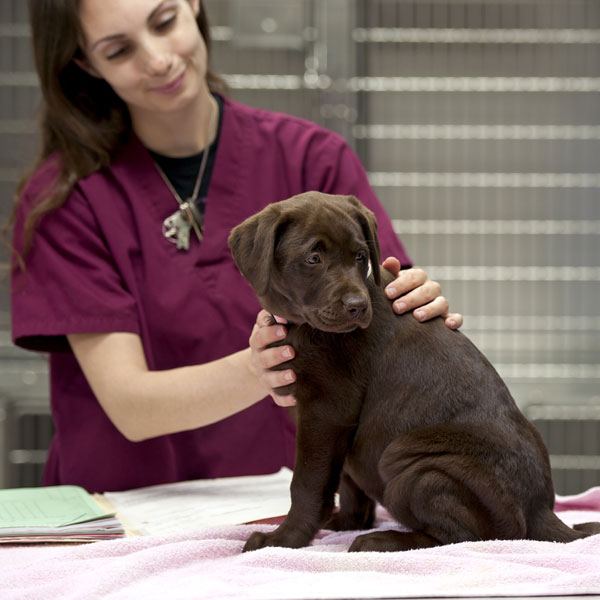 Puppies should begin vaccinations by eight weeks of age. Whether your vet recommends the DAPP, DA2PPC, DAPPC, or DHPP combination immunization course, vaccinations and boosters can help to mitigate or totally prevent distemper in dogs and a host of microscopic dangers from affecting your dog. I know there’s a contingent of people who oppose vaccination because of personal beliefs, but as noted scientist Neil deGrasse Tyson says, “That’s the good thing about science: It’s true whether or not you believe in it. That’s why it works.”

6 comments on “Distemper in Dogs: It’s Deadly But Also Preventable”