Next on The Scoop: 10 Reasons Dogs Hate Easter
Breeds 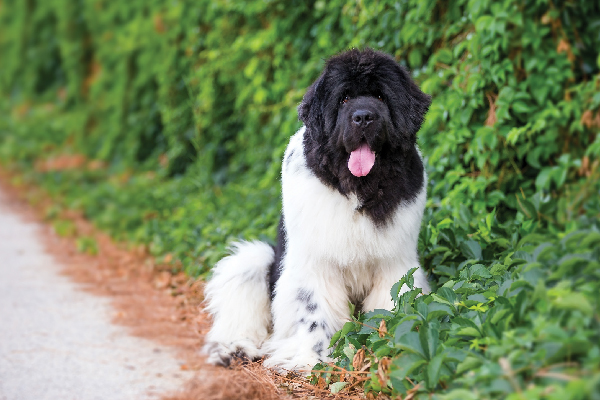 8 Great Facts About the Newfoundland Dog

Interested in adding a Newfoundland dog to your family — or already have one and would love to learn more? Let’s learn eight fun facts about this noble dog.

He is the black bear of the dog world, but his imposing size and appearance belies a kind nature and a long history of service to mankind. Here are eight fun facts about the noble Newfoundland dog.

The Newfoundland dog did indeed originate in the Dominion of Newfoundland (now a province of Canada), where he was used as a working dog by fishermen. He descended from a breed native to the island and known as the Lesser Newfoundland or the St. John’s Dog. DNA analysis confirms that the breed is also closely related to other Canadian retrievers like the Labrador and the Nova Scotia Duck Tolling Retriever. The Newf shares many physical traits (huge head, broad muzzle, stout legs) with the Mastiff and Molosser-type breeds such as the St. Bernard. This was likely due to the introduction of Mastiff blood, probably from matings with Portuguese Mastiffs, which were brought to the island by Portuguese fishermen beginning in the 16th century.

The Newfoundland excels at water rescue and lifesaving, thanks to his muscular build, thick double coat, webbed feet and innate swimming ability. The breed’s large bones and massive size give it the power to handle choppy ocean waves and strong tides. Newfs have a huge lung capacity for swimming long distances. The oily, waterproof coat keeps a Newfoundland dog dry and protects them from the chill of icy waters. The breed’s history is replete with examples of courage demonstrated by the Newfoundland in lifesaving exploits. One particularly famous Newf was “Seaman,” who accompanied American explorers Lewis and Clark on their expedition.

The Newfoundland’s lifesaving prowess would not be possible were it not for the breed’s kind nature. The American Kennel Club breed standard says it in the most emphatic way: “Sweetness of temperament is the hallmark of the Newfoundland; this is the most important single characteristic of the breed.” The standard starts out with the following description under “General Appearance: The Newfoundland is a sweet-dispositioned dog that acts neither dull nor ill-tempered. He is a devoted companion. A multipurpose dog, at home on land and in water, the Newfoundland is capable of draft work and possesses natural lifesaving abilities.”

A typical adult Newfoundland male stands 28 inches at the shoulder; 26 inches at the shoulder for an adult female. This is also a very heavy, substantial breed, with adult males ranging from 130 to 150 pounds; adult females from 100 to 120 pounds. For all his size, however, the Newfoundland dog is a mellow fellow and doesn’t require a huge amount of room to be happy. Adults will typically spend much of the day napping. While many a child has learned to walk grabbing hold of a Newfoundland, active puppies can easily bowl over a toddler, so adult supervision is recommended.

5. Some Newfoundland dogs are black and white

While the majority of Newfs are solid black, perhaps with a touch of white on the chin, chest and toes, it is the white Newf with black markings that boasts a lasting artistic connection. As an homage to the famous English painter, Sir Edwin Henry Landseer, who often chose the black-and-white Newfoundland dog as the subject of his works, this color pattern is known as the Landseer. There are also solid brown and solid gray Newfs.

Although Newfoundlands are often encountered in books and art, the most famous Newfoundland dog in literature is easily “Nana,” the faithful protector of the Darling children in J.M. Barrie’s Peter Pan. Robert Kennedy’s family was devoted to Newfs and many casual photos of the young Kennedy children feature a Newf lovingly watching over them.

Many breeds are still waiting impatiently for their day to win Best in Show at the Westminster Kennel Club, the most prestigious dog show in America that takes place every February at Madison Square Garden in New York City. Newfoundlands have triumphed here twice: “Adam,” more formally known as Champion Seaward’s Blackbeard, claimed the top prize in 1984 and, two decades later, it was “Josh,” Champion Darbydale’s All Rise Pouch Cove, who stole the spotlight in 2004.

To honor the Newfoundland’s illustrious history of lifesaving and to appreciate the fun of seeing the dogs doing what should come naturally to them, the Newfoundland Club of America designed rescue and water dog tests. In the Junior Division, Newfs are required to retrieve a bumper, a life jacket or cushion, deliver a rope to a swimming steward, tow a boat and swim calmly with a handler. Performing these and other exercises earns the Newf a Water Dog title.

The exercises get more challenging in the Senior Division, and to earn the Water Rescue Dog title the dog must retrieve two articles in the proper order, leap from a boat to fetch a paddle, carry a life ring to a swimmer in “distress,” retrieve underwater, tow a boat to shore and leap from a boat to save his handler who has “fallen” overboard. There is even a third division for elite working dogs that compete for the Water Rescue Dog Excellent title.

4 comments on “8 Great Facts About the Newfoundland Dog”