Next on The Scoop: Hot Car Safety for Dogs: 8 Tips
Breeds

Did you know — the Great Dane isn’t actually Danish at all or that the breed can attribute some of its popularity to a Disney film?

The Great Dane has been called the “Apollo of Dogs.” With his regal bearing, muscular body and imposing size, he is immediately recognizable and, once seen, never forgotten. Here are 10 fun facts about the sleek, dashing Dane. 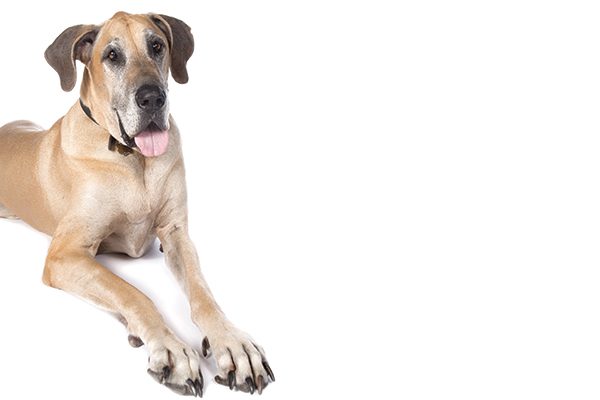 1. The Great Dane is actually not even a Dane

Bred to hunt boars, bears and deer, the Great Dane was called the German boarhound in the English-speaking world back in the 19th century. He is not a Danish creation. A few German breeders attempted to introduce names like the German Dogge and the German Mastiff because they wanted the breed promoted as a dog of luxury and nobility, not a working dog. Their efforts did not fly. Due to the growing animosity between Germany and other countries, the dog instead became known as a Great Dane, after the “grand danois” in a 1755 French historical work by Buffon.

2. The breed comes in six colors and patterns

Golden fawn with a black mask is the most commonly seen color, but the breed standard recognizes five other colors and patterns: brindle (black chevron stripes on a gold background); glossy black; pure steel blue-gray; harlequin (a white base color with black torn patches distributed over the entire dog); and mantle (a solid black blanket extending over the body and a black head, with a white face blaze, neck collar, chest and white on the forelegs).

3. Sizing up the Great Dane

The Great Dane combines power with elegance in a smoothly muscled body. Danes have height rather than mass, which allows them to take long, easy strides at a good speed with no trace of coarseness or clumsiness. The breed standard prefers adult males to be a minimum of 32 inches tall at the shoulder and adult females a minimum of 30 inches at the shoulder, provided they are well proportioned to their height.

Although most Great Danes in the U.S. have their ears cropped for the show ring to stand erect, many pet owners prefer a natural, dropped ear. Breeders will typically leave a pet Dane’s ears uncropped if the buyer requests it. We’re also seeing more natural-eared Danes competing in the show ring.

The Dane can be very content in the city, and many even thrive in apartments. Once past the rambunctious puppy stage, adult dogs need a few long daily walks on leash. When their exercise needs are met, they’re pretty mellow and will tend to laze around the house.

6. The breed doesn’t have the longest life expectancy

As a giant breed, Danes have shorter lives than other breeds. Owners treasure every day they have their Danes, realizing that a life span of seven or eight years is common. Happily, some breeders have made longevity a priority, and we have Danes living longer lives, even into the double-digit years. As with humans, longevity runs in families, so when shopping for a Great Dane puppy, ask breeders about the life span of dogs in their bloodlines.

The phrase “Euro Dane” is suddenly being tossed around. It suggests a Great Dane imported from overseas, but the moniker is being used to refer to homegrown dogs with a bulkier, more substantial appearance. Just another fad in this age of “designer dogs.” No responsible breeder would suggest that these muscle-bound dogs are inherently more valuable.

Lina Basquette (April 19, 1907 to Sept. 30, 1994) enjoyed a memorable, 75-year career in the entertainment industry, beginning in the silent film era. She was Sam Warner’s child bride, married another six times, became Hitler’s courtesan and shared her outrageous life in the autobiography Lina: DeMille’s Godless Girl, named for the 1928 film in which she appeared. But at an age when most people would be thinking about retirement, Basquette bought an estate in Bucks County, Pennsylvania, and launched a second career with Honey Hollow Kennels, one of the most famous Great Dane breeding establishments in the world. She bred scores of champions and, as a professional handler, drove across the country for decades, exhibiting her beloved Danes and racking up Best in Shows. Eventually, she retired from handling and became an equally flamboyant AKC dog show judge.

9. Great Danes of the rich and famous

10. How Disney plays into the breed’s popularity

Many baby boomers first fell in love with Great Danes with Walt Disney’s The Ugly Dachshund (1966). Dean Jones and Suzanne Pleshette star as Dachshund owners and dog show exhibitors who end up with a Great Dane puppy, Brutus, abandoned by his mother. Brutus, being a bright boy, imitates his Dachshund “siblings,” crawling around on his belly and generally being a goofball until he grows up, gets taken to a dog show, catches a glimpse of a beautiful female Dane and suddenly turns into the proud, majestic Brutus we knew was lurking beneath the faux Dachshund shenanigans.

Allan Reznik is a journalist, editor and broadcaster who specializes in dog-related subjects. He is the editor-in-chief of Dogs in Review and the former editor of Dog Fancy magazine. A city dweller all his life, on both coasts, he now enjoys the rural South with his Afghan Hounds, Tibetan Spaniels and assorted rescues.