Next on The Scoop: NYC’s Animal Medical Center is More Than a Vet Hospital
Health & Care 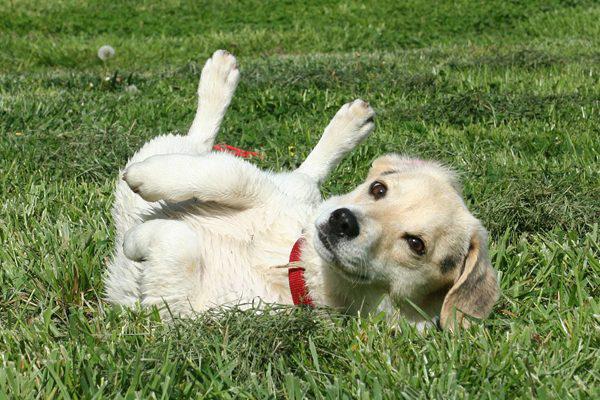 All About Dog Genitalia and Dog Reproductive Systems

We’ve found answers to all the questions you have about dog genitalia — how it changes over your pup’s lifetime and how exactly everything works down there.

I’m going to say something that might make you uncomfortable — dog genitalia. Your dog’s “naughty bits” might not be something you like to think about, but as his caretaker, it’s important that you pay attention to them. Or at least give them some consideration. Because if you’re a responsible dog owner, you’re most likely going to want to have parts of them removed.

Let’s take a look at what’s going on with dog genitalia during the different stages of your dog’s life, and why you need to know about it. 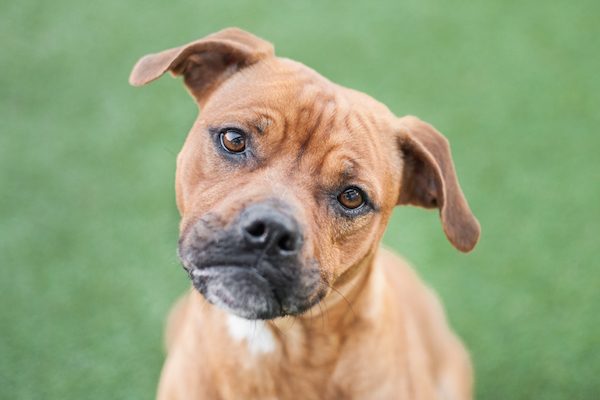 A Boxer-mix puppy tilting his head. Photography by Shutterstock.

Baby puppies are so adorable, we can’t even imagine that they have genitals. That’s for grown-up dogs, right? Not really. When you first make your puppy’s acquaintance, you’ll want to know his or her gender. This will be the first, but not the last, time you think about your dog’s reproductive organs.

Male puppies are born with their testicles undescended, meaning that they are tucked inside their bodies and haven’t yet made an appearance. You can tell a male puppy’s gender by the tiny little sheath that houses his penis. A female puppy, on the other hand, doesn’t look a whole lot different. She has a little protuberance like the male does, but hers is closer to the base of her tail. The male’s sheath is located closer to his belly.

When male puppies reach about 8 weeks of age, their testicles drop. This means they descend into the scrotum and are outwardly visible. Sometimes, it can take longer. And sometimes it doesn’t happen at all.

My dog, Mookie, was 6 months old, and only one of his testicles had dropped. The other was nowhere to be found. By the time I had him neutered at 10 months, he was officially a monorchid: a dog with only one descended testicle. That’s a problem. A dog with only one descended testicle — or no descended testicles, known as a cryptorchid — is still fertile and will exhibit all the behaviors of a male with two dropped testicles. Further, the undescended testicle is prone to developing cancer later in the dog’s life. So, when Mookie was neutered, he didn’t undergo the usual procedure, which is the simple removal of the testicles from the scrotum. Instead, he had to have abdominal surgery to remove the testicle that never came to the surface. It was buried deep in his abdominal cavity, and he’s got a 7-inch scar to prove it.

Your puppy reaches sexual maturity around the age of 6 months, and this is the time to talk to your veterinarian about having your dog spayed or neutered. You want to bring those sex hormones to a screeching halt before they ramp up and start causing problems.

Dogs whose reproductive organs are intact into adulthood are prone to certain behaviors. Females go into estrus — heat — and with that, the urge to mate is strong. She may drip discharge around the house and be more sensitive to noises and other stimuli. If she gets the chance, she may run off in search of a mate.

Intact female dogs go into heat about twice a year and stay in heat for about two weeks. They are also prone to mammary cancer. In fact, spaying a female dog before her first heat is the best way to prevent her from developing this disease.

Male dogs are always on the make. Most intact males are in constant search of a mate. Their bodies are loaded with testosterone, which makes them more likely to fight with other dogs. It also inspires them to urinate all over the place to mark their territory. Intact males are also famous for running away. If no females are around, they go looking for one.

For these reasons and more, it’s a good idea to spay and neuter. Spaying involves removal of the female dog’s uterus and ovaries, which renders her infertile and stops her heat cycles. Male dogs are neutered by removing the testicles from the scrotum. This drastically reduces the amount of testosterone in their bodies and eliminates a lot of unwanted behaviors.

Senior dogs who haven’t been spayed or neutered are still capable of reproducing up to a certain age. Females are fertile until they get to about 8 or 9 — sometimes older — depending on the dog. Their heat cycles eventually slow down until they stop having them.

Males can breed well into their senior years. Their testosterone levels drop, and they become less active in seeking a mate. But if presented with a female in estrus, a male dog as old as 12 or more can still reproduce.

Chances are your senior dog has been spayed or neutered. You won’t be able to tell that your female dog has been spayed by looking at her since the reproductive organs that were removed were all internal. Your male dog, on the other hand, will have visible remnants of his once proud testicles: an empty scrotum.

Don’t feel bad about having done away with your dog’s reproductive organs. It’s the right thing to do. It’s a fact that dogs that have been spayed or neutered are happier and healthier, and make better pets.

Read more about dog reproduction and dog genitalia on Dogster.com:

An award-winning writer and editor, Audrey Pavia is a former managing editor of Dog Fancy magazine and former senior editor of The AKC Gazette. She is the author of The Labrador Retriever Handbook (Barrons) and has also written extensively on horses as well as other pets. She shares her home in Norco, California, with two rescue dogs, Candy and Mookie.