Next on The Scoop: 19 of Our Favorite Dog Dads in Honor of Father’s Day
Health & Care 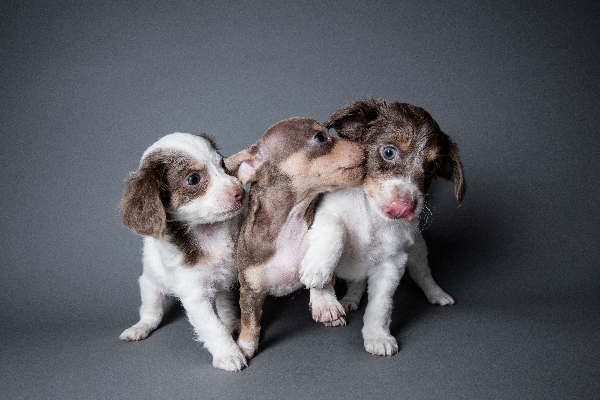 Can a Litter of Dogs Have Different Fathers? Let’s Talk Dogs and Superfecundation

Have you ever met a litter of young puppies who all looked so different it was hard to believe they were even related? Maybe a few of the puppies looked like Rottweilers and the others looked like Golden Retrievers. As it turns out, in a litter of puppies, some of the dogs can actually have different fathers, making them half siblings rather than full siblings. This phenomenon is called superfecundation.

First, what is superfecundation in dogs? Could this litter of puppies have different fathers? Photography ©LivingImages | E+ / Getty Images.

“Superfecundation occurs when a female mates with two or more males,” explains Donald Shellenberger, DVM, of VCA Smoketown Animal Hospital in Lancaster, Pennsylvania. “One litter can potentially have multiple fathers as long as they all mate with the female in the optimum time of conception.”

This means a litter might have two or even more fathers. This situation is often seen in stray animals, as well as in un-spayed females who live in close quarters with one or more intact male dogs. (In case you’re wondering, a single puppy cannot have multiple fathers; each individual puppy in a litter has only one father.)

“It’s probably more common in dogs than cats since cats ovulate with copulation,” Dr. Shellenberger says. “It can happen with other species, especially in animals with multiple eggs and large litter sizes.”

How does superfecundation in dogs happen?

Female dogs release many eggs when they are in heat (estrus, or the fertile period). If they copulate with more than one male dog within the two- to three-week estrus cycle, they can potentially become pregnant, perhaps by more than one male.

So, how can you tell if dogs have multiple fathers?

Different characteristics, sizes and colors might be a tipoff that a litter of puppies has different fathers. Photography ©Voren1 | iStock / Getty Images Plus.

“You can tell if puppies in the same litter have different fathers by the characteristics, sizes and colors,” Dr. Shellenberger says.

In some cases, you might not be able to tell by appearance alone. This is especially true if the mom and all the probable fathers are all purebred of the same breed. In cases like this, a DNA test can reveal the true parentage (if only they had a Maury Show for dogs!).

How common is superfecundation in dogs?

Superfecundation happens more often than you might think. “In animals that are free to roam as they please, it’s fairly common,” Dr. Shellenberger explains.

5 comments on “Can a Litter of Dogs Have Different Fathers? Let’s Talk Dogs and Superfecundation”