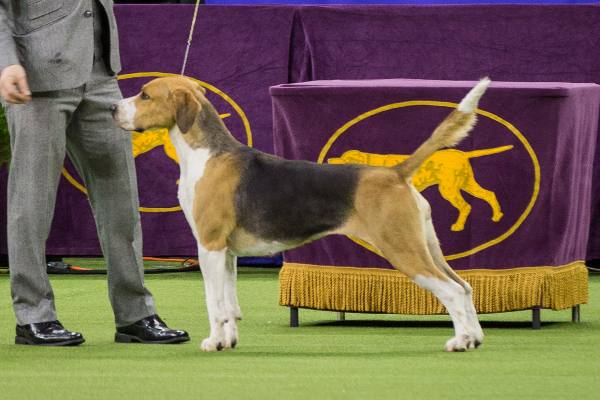 The Look of a English Foxhound

English Foxhounds have medium-sized, athletic frames covered in short, dense coats that usually come tri-colored (black, white & tan) and bi-colored (white & tan). Their broad heads have long muzzles, brown eyes, wide nostrils and ears that hang close to the cheeks. They have straight, strong legs with round feet, and their tapered tails are usually carried high. Overall, English Foxhounds have an alert, sturdy and sporty look.

English Foxhounds make wonderful live-in companions, being easygoing and laid-back, but they really shine in the great outdoors. Make sure they get plenty of time to run around and “hunt,” so to speak. They love exploring their environments and taking on jobs. If you work outside, get your English Foxhound involved in a useful task.

English Foxhounds form special bonds with their families, but they are not likely to beg for attention. They have very “businesslike” attitudes. They also happen to be patient and gentle—especially with children.

English Foxhounds can live as long as 10 years with relatively few genetic health issues. Grooming them is particularly easy—just brush and bathe them occasionally. Probably not the best choice for apartment life, the English Foxhound needs a fenced yard, fresh air and the occasional opportunity to run free in a protected area. If you’re a jogger or hiker, take the English Foxhound along for an adventurous and energetic partner.