Next on The Scoop: Police K-9s: New Training When It Comes to Marijuana
Reactive Dogs 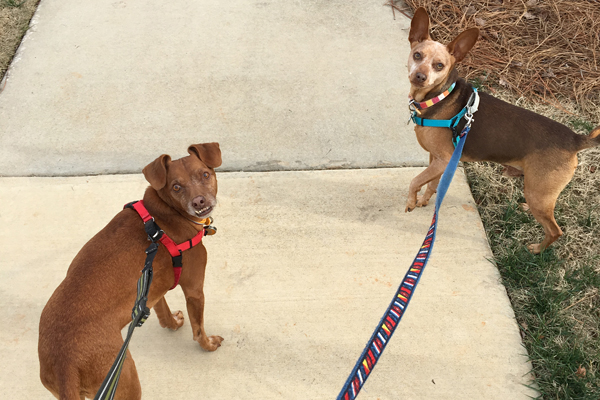 Dug Up at Dogster: Why Dogs Should Be On Leash in Public Areas

Is your dog leash reactive? Does it upset you when other dog owners have their dogs off leash in public areas when your on-leash dog is reactive?

My dog, Justice, is undergoing private training lessons due to his on leash reactivity. We’re now living in Charlotte, North Carolina, so after some research I chose a wonderful accredited, positive trainer named Camille. We chatted for almost two hours in our first meeting. Since Justice loves walks more than anything, and walking keeps him from marking inside, I was unwilling to stop walking him while we worked on the reactivity issue. So she made me promise to walk him when he wouldn’t encounter any other dogs so he would not have a reactive experience, therefore reinforcing this behavior.

“No problem,” I said. “I’m good at this.” So today I started out with Justice and Tampa Bay for their morning 25-minute walk. I live across from a small marsh with a sidewalk around it and a dog park at one end — Dog Central in my neighborhood. But like all reactive dog parents, I’ve learned the off-times for dog walkers. So I was pretty confident I could do this. The difficult part was the street right in front of my house.

That was until we turned the corner onto my street. Right in front of my house was a lone dog walking off leash, no pet parent in sight. Hmm. How could I get my dogs into the house and then run after the other dog to keep him from getting hit as he was heading toward one of the busiest streets in our neighborhood? I scooped up 20-pound Justice (a Min Pin/Vizsla mix), covered his eyes with my hand and began trotting toward my house. As I got closer, I did see the pet parent walking a little bit ahead (she was hidden by a truck) with another dog on the leash. At least the dog was not lost, but why was she walking one of her dogs without a leash? And, she was walking on the house side and not on the dog-walking sidewalk across the street.

Then began the internal war — say something or not. I chose to say something. I didn’t recognize the woman, so she was probably new to the area. “I’m so sorry to bug you,” I called out as I walked closer to her and my house, “you may not be aware that in our neighborhood all dogs have to be leashed.”

“Oh, I am sorry,” she said very nicely. “He’s old and just follows me around.”

“I completely understand,” I said, trying to be as positive as possible since I just wanted her to comply, not to hate me, “but my dogs are reactive and an unleashed dog is a problem to them.” She can see that I’m carrying one dog and covering his eyes.

As I was saying this, her old, but obviously sweet, dog swung around and started making a beeline right for my dogs, probably thinking he found some new friends. The poor woman, surprised, had to run after him. Meanwhile, Justice knew something was up and was struggling to get my hand off his eyes. Tampa, thank goodness, stayed quiet, eyes wide, drinking in the drama.

I got to my house as she got to her dog about 10 feet away from us. I ran up the stairs and put my dogs in the house — not a bark out of Justice. Whew! (Next time, we’re going out through the garage in the back!) Make sure to bring poop bags with you on walks. Photography ©media point inc | Getty Images.

Reasons dogs should be on leash

This is why one of my pet peeves is an unleashed dog. The owners believe that their dogs are so well-trained or old or friendly that they can be walked off leash. But, it’s not about their dog, it’s about the safety and comfort of everyone else. All dogs should be leashed in public places for many reasons:

I have heard this same concern from many Dogster readers who have reactive dogs. There’s nothing worse than trying to work with your reactive dog than when you come across someone who has an unleashed dog. And what’s worse is when that person gets angry with you — even though they are in a public place with a posted leash law.

Luckily, my neighbor didn’t get angry, and we were able to handle the situation quickly. I think she was very surprised her dog turned around and made a beeline for my dogs. We all think we know our dogs, but they never fail to surprise us, which is why it’s best to keep them and others safe by keeping them leashed in a public area.

Melissa L. Kauffman is the executive editor of Dogster magazine. She lives in Charlotte with her two rescue dogs, a rescue parrot, a variety of rotating parrots she fosters and her husband.

Posted in Reactive Dogs, Leash Laws, Dug Up at Dogster, on leash,

6 comments on “Dug Up at Dogster: Why Dogs Should Be On Leash in Public Areas”