Next on The Scoop: Too Cute: Marley the Dog Discovers the Ocean

Let’s Talk: Where Is the Strangest Place You’ve Found Your Dog?

Dogs can get themselves in the craziest places without our knowledge. Mine once got on a yacht!

Earlier this week, a rescue team fished a Cocker Spaniel out of a 30-foot-deep well in South Carolina. She was soaked and a bit shaken — and probably not too stirred. Amazingly, she was also uninjured.

The soggy doggy had ended the day by doing something she loved to do. She’d jumped on top of the well to look down into the shaft through a small hole in the well cover. But this time there was no cover to land on — her owner had been doing some maintenance and hadn’t yet replaced it — and the poor pooch got a frightening surprise. 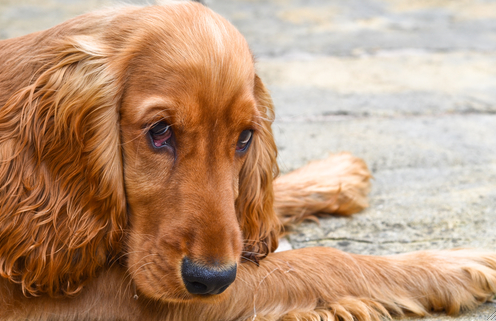 Down, down, down she went, plunging through the cool darkness, until the water caught her. Luckily, she didn’t hit the sides of the well, and she was able to paddle until her owner’s 911 call brought in the rescue crew.

Her descent into the abyss got me to remembering the time when my previous dog, Joe, an Airedale Terrier, ended up on someone else’s boat in the middle of the night. We’d come in from a day of fishing and boating on San Francisco Bay. As we were collecting our belongings on the dock, something apparently caught Joe’s interest, because next thing we knew, there was no Joe. A solid hour of searching found him looking very confused on the high bow of a giant yacht. We never figured out how he managed that feat, since the boat was at least two feet from both sides of its dock, and Joe was not one for water sports. 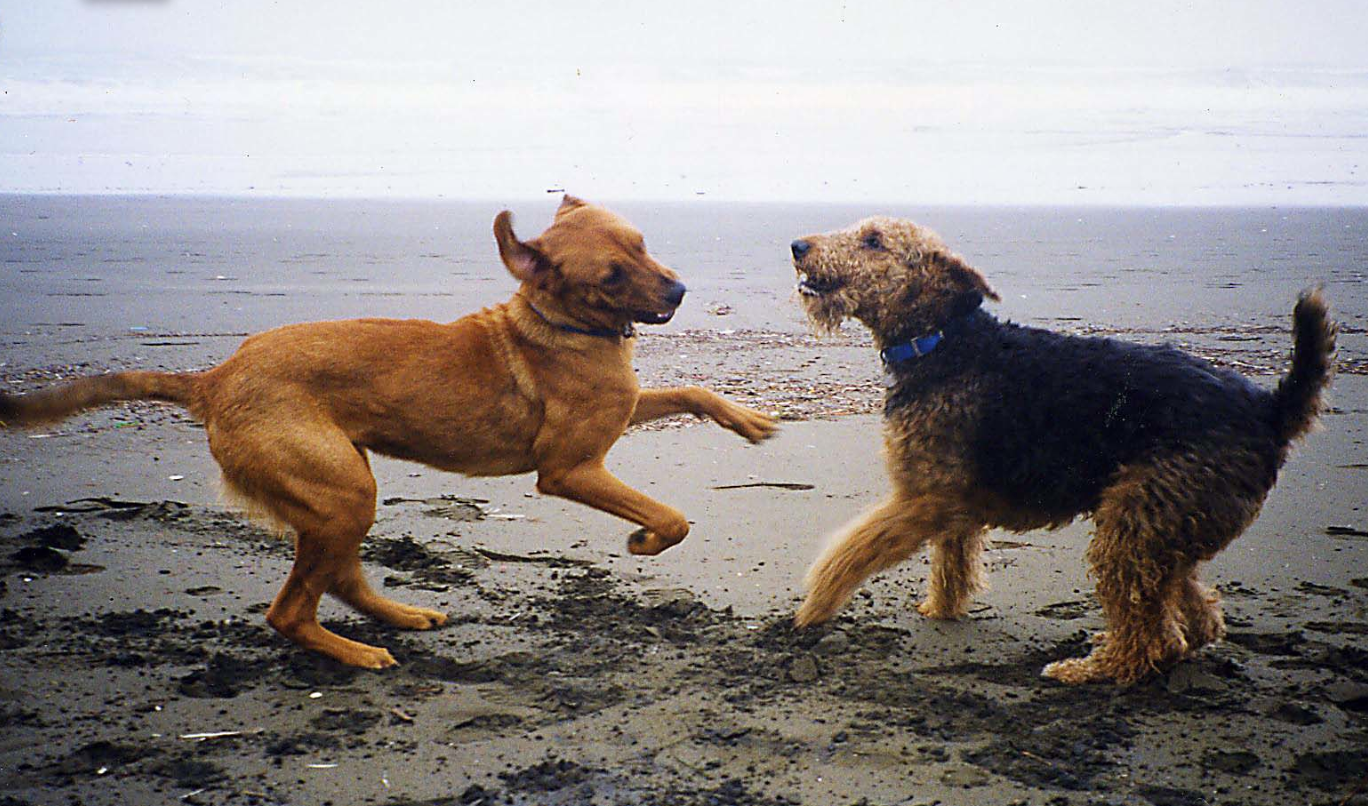 Another odd place Joe ended up was our bedroom. Not that it was unusual for him to be there. But what was unusual was that he was in there with the door shut when we returned from having been gone all day. Mind you, we didn’t leave him like this. He was dying to get out, but as we soon discovered, it wasn’t because the bedroom bored him. It was because he’d been trapped in the room with a big tabby cat.

“What self-respecting Airedale would be unhappy to be stuck in a room with a cat?” I wondered as I tried to coax the cat out from underneath a dresser.

That’s when I saw the blood splattered all over the walls and the wooden dresser drawers. I thought, “Uh-oh, poor cat! What did my big, cat-crazy terrier do to you?” But when I persuaded the cat to come out of his hiding place, I saw that he was fine. Then I got my husband to get Joe, who was in the far end of the house by this point. I inspected him more closely, and realized he’d been the one at the wrong end of the enemy. The hapless fellow had been beaten up by the cat. 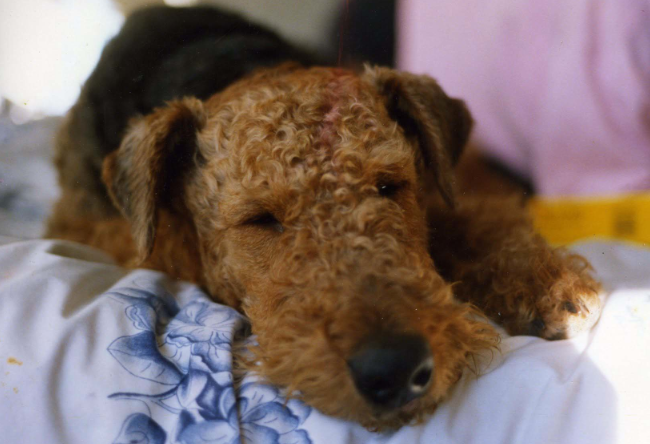 The cat had probably come in through the doggy door and padded upstairs when Joe caught wind of him and gave chase. Somehow, in the pursuit or the aftermath, the door had slammed shut and the cat let Joe have it. I sometimes wonder if the cat had actually gone to the door, grabbed the knob, and shut it before unleashing his wrath on Joe.

After that, Joe avoided the bedroom for the rest of his life.

I know most Dogster readers are very responsible, but sometimes weird things happen to the dogs of the best-intentioned of us. How many of your dogs have had experiences like Reese’s and Joe’s? What’s the weirdest place or situation your dog has ended up in? Tell us a good story. We love to listen!