Next on The Scoop: Come See Herb Williams’ Dog Art — Made Out of Crayons!
Dogster News 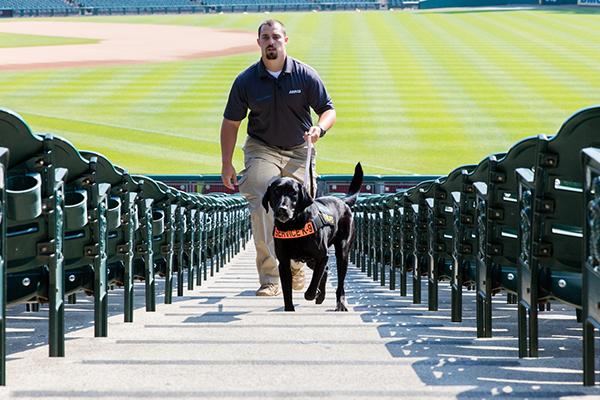 How Vapor Wake Dogs Could Prevent the Next Mass Tragedy

Never heard of Vapor Wake dogs? You’re not alone. Learn how these dogs are changing security checkpoints and could potentially prevent mass tragedies.

Within the last year, tragedy has struck large crowds numerous times, including when a suicide bomber killed 22 people at an Ariana Grande concert in the United Kingdom and when a Nevada resident, after bringing firearms into the Mandalay Hotel Resort & Casino, opened fire on the crowd at Las Vegas’ Harvest Music Festival, killing at least 58 and injuring at least 500. Most recently, a shooter disgruntled with his in-laws, sprayed rounds of gunshots into the small Baptist Church they attended in Texas, killing 26 people and leaving many others severely injured. While each case is still under investigation, many security professionals agree that Vapor Wake® dogs could have been a deterrent to these deadly attacks.

First, what are Vapor Wake dogs? 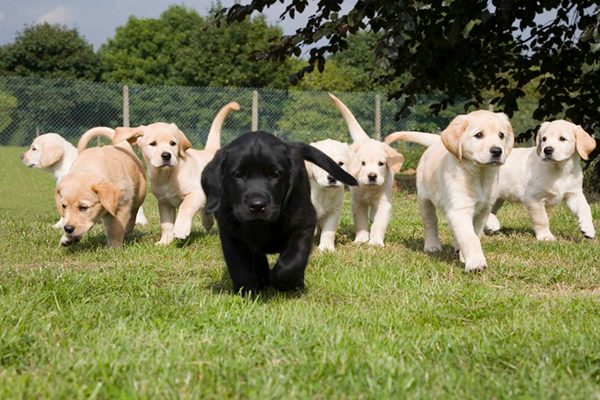 These cute puppies could grow up to be Vapor Wake dogs! Photography courtesy VWK9, LLC. Used with permission.

Developed by Auburn University’s Canine Performance Sciences (CPS) program, which includes scientists and security professionals, Vapor Wake dogs are a new “breed” of dog that is scientifically bred for superior scenting ability, intelligence, physical soundness, and a high desire or drive to search and hunt. Auburn has developed a proprietary training regime for Vapor Wake dogs, including a patented name and process for training dogs to detect and to identify the source of explosives worn or carried by a person.

Since Vapor Wake dogs work in airports, sports stadiums, concert venues, large churches or any other locations where there are large crowds of people that require rapid screening, Auburn chose the popular and easily recognizable Labrador Retriever — a kind, friendly-looking dog with a good temperament.

How are Vapor Wake dogs trained? 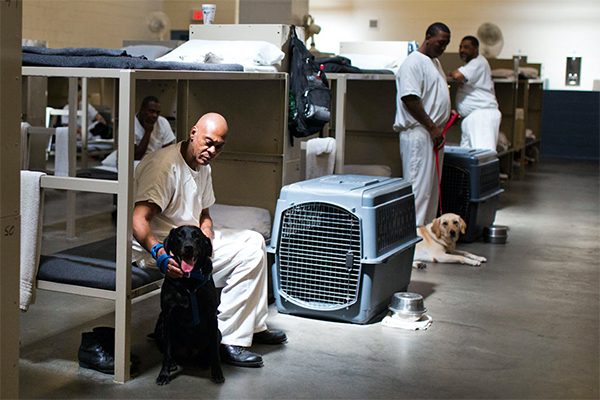 The training process is proprietary to Auburn’s CPS program and the rigorous regimen includes a stint in a prison facility. Dogs leave the university at six months old and enter a highly structured prison program until they are 10 or 11 months old. During this formative socialization period, a team of people works with each dog, including the handler, assistant handler and various pet sitters who are mentored to work with the dogs as they progress through the program.

Canine handlers document everything about every dog, every day. During their tenure in the various prison facilities, dogs are taken on special field trips to introduce and to acclimate them to being out in public spaces.

What exactly do Vapor Wake dogs do?

Everything emits an odor. While some odors are stronger than others (like coffee), others are so faint that not even sophisticated machinery can detect them — but trained dogs can. Auburn’s carefully bred and scientifically trained dogs can sense and follow the “vapor wake” that a moving object leaves in the air, several minutes after it has left a space.

“Vapor Wake canines are able to track thermal plumes left behind in a person’s wake,” explains Paul Waggoner, PhD, co-director of Auburn’s CPS program. “For example, when people move, they emit rising warm air that trails behind them. Under the right conditions, these specially trained dogs can sniff body heat for particles and detect a culprit with explosives within a sports stadium or concert venue, filled with tens of thousands of people.”

How are Vapor Wake dogs different than Explosion Detection Dogs? 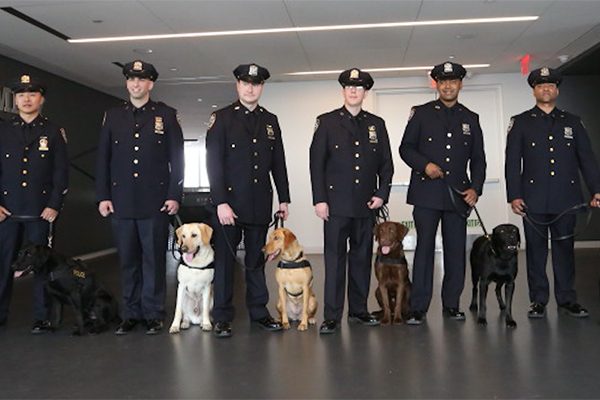 An Explosion Detection Dog (EDD) is led by his handler with his nose to the ground, sniffing one object or person at time. Unlike this, a Vapor Wake dog works with his nose in the air, leading the handler to the source of the scent and is also able to screen thousands of people at a single-entry point, like at the entrance of Madison Square Garden.

Although Vapor Wake dogs are primarily trained to continuously sample the air for an explosive target and follow the scent of the object or person, these unique dogs are also able to perform traditional bomb detection searches, just like EDDs.

Vapor Wake dogs spend up to 15 months in the scientific and patented training program at Auburn University, whereas EDDs generally receive a few months of training.

Why use Vapor Wake Dogs?

Paul Hammond is a former special operations officer who was in the British Elite Forces – Parachute Regiment and the Army Dog Unit, was an independent contractor overseas, and is the current president of VWK9, LLC., the exclusive service provider of the use and deployment of Vapor Wake dogs. Hammond explains, “dogs possess up to 300 million olfactory receptors in their noses, compared to humans, who have only about six million. It would take years, years and years, if we could ever replicate what Vapor Wake dogs could do.”

Furthermore, “with current events going on around the world, it’s widely recognized that body-worn explosives are one of the newest threats,” Hammond explains. “Moreover, since the FBI announced in 2015 that there are terrorist cells in all 50 states, organizations need to prepare and create realistic budgets to deal with continuous threats. Vapor Wake dogs are effective deterrents that can protect venues and their guests.”

Affirming Hammond’s statement, John F. Kelly, former Secretary of Homeland Security, says, “the threat to our nation and our American way of life has not diminished. In fact, the threat has metastasized and decentralized.”

Kelley made the statements at an April 2017 speech at George Washington University when he was serving the U.S. as Secretary of Homeland Security. 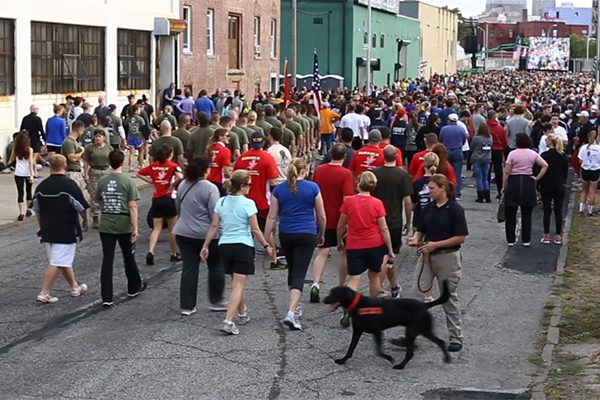 According to military veteran and former Army Ranger Ben Tolle, COO and founder of Prevent Advisors, the security arm of the OakView Group (consultants to the sports and live entertainment industry), his clients are recognizing potential, security problems and are committed to improving safety with new methods. While many venues are beginning to use facial-recognition programs and counter-drone technology, he believes that, for many reasons, dogs are also a cost-effective way of scanning large crowds and identifying threats.

“You can’t put a price on a well-trained detection dog,” Tolle says.

The Metropolitan Atlanta Rapid Transit Authority or MARTA, the principal public transport operator in the Atlanta metropolitan area, uses Vapor Wake dogs to protect their infrastructure and passengers. Chloe Payne, a five-year MARTA canine officer who trained at Auburn University, says her dog brings a sense of security and comfort to passengers on the trains on which she works. Payne trains her dog daily on Atlanta’s rapid transit system and believes that she can move around easily with her Labrador Vapor Wake dog because passengers are not afraid of the dog.

Payne attended another dog training program prior to training at Auburn University, but she believes that the Auburn dogs and training techniques were far superior. Moreover, Auburn customized a program for MARTA officers to address their needs, and can create a customized program for other organizations as well.

Sports and live entertainment venues, railways and police department are not the only organizations that utilize Vapor Wake dogs. “Churches, mosques and synagogues have traditionally been easy threats for terrorists,” states VWK9’s Hammond.

Andy Willis agrees. Willis is Director of Security Services at Bellevue Church, the largest church in the Memphis, Tennessee, area and one of the leading churches in the Southern Baptist Convention. With a membership of about 20,000, between 7,000 and 10,000 attend weekly worship services and about 15,000 come to the church on special holidays. The church campus sits on 300 acres and is a community meeting place for many organizations. As a result, security to this large venue is of particular concern.

In 2016, Willis (also an elite military veteran), and his staff were confronted with an armed shooter on Easter. Willis, who has a large staff but also has parishioners that are trained volunteers, recanted that the man was stopped by the church’s security people before he could enter the sanctuary, and was subsequently arrested by Memphis police.

This is just one reason he says he’s a proponent of Vapor Wake dogs.

“A Vapor Wake dog team can move around our campus and confirm the environment is sterile in a very short period of time. Moreover, the dogs can screen thousands of people in a fraction of the time that my large security staff can,” Willis says.

Willis has invited Auburn’s CPS team and Vapor Wake dogs to demo the dogs for other church organizations, his local Memphis police department and other veteran colleagues who work in the world as security professionals.

How much do Vapor Wake dogs cost? 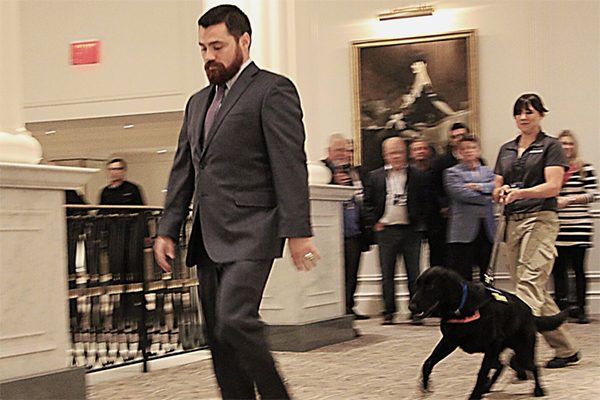 Vapor Wake dogs are costly, but may be worth it. Photography courtesy VWK9, LLC. Used with permission.

The cost of Vapor Wake is about $50,000 for an organization and/or municipality, a fee which includes not only the trained dog, but training the human handler. Every few years the dog and the handler must return to Auburn University for re-certification and an updated security course. While it’s difficult for some organizations and municipalities to acquire such a superior explosive-detection dog, Vapor Wake dogs are available under service contracts, too. And, as more threats continue — especially in large crowd situations — these amazingly skilled working dogs will continue to rise in popularity and pervasiveness to protect the public.