Next on The Scoop: The Odd But Hopefully Endearing Things I Do Because I Have a Dog

Before you put United on your airlines-to-boycott list, check out the loophole in their new policy unearthed by the Chicago Tribune.

It’s not the first airline to ban pittie types, but it’s the largest U.S. airline to do so. United adopted Continental Airlines’ “Pet Safe” program when the two airlines merged in early March. Continental had a pretty rigorous anti-pit policy, which United picked up as part of the merger.

Now this behemoth joins American Airlines, which has banned pit bulls since 2002. Why? Ostensibly because of a pit bull who panicked on a cross-country flight, broke out of his kennel in the cargo hold, and ripped the daylights out of the plane’s electrical system. It could have been bad. Really bad. 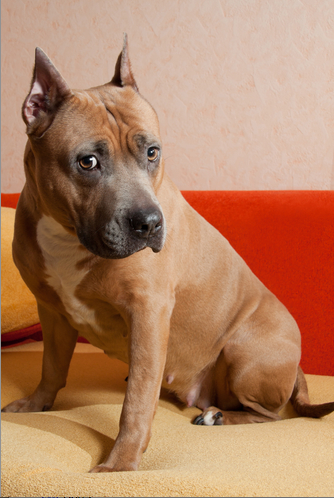 But pit bulls aren’t the only breed known for their chewing. In fact, I happen to live with a yellow Lab (Jake, I won’t tell them your name, don’t worry) who probably would have done a number not only on the wiring, but on any suitcase corners or handles that got in his way as well.

According to an excellent post by Chicago Tribune columnist Steve Dale, United reported that similar incidents involving pit bulls have happened over the last few years. Pits escaping and chewing wiring seems like kind of a weird trend, doesn’t it? What do planes coat their wiring with? Bacon fat? I wonder if any dogs have been zapped during their electrifying feasts. I know a bunny who met the Big Rabbit in the sky after gnawing through some electric cords in her house.

All airlines have a policy of banning dogs of any breed who seem aggressive when at the point of departure. That seems much more reasonable than all-out breed bans. I know a beagle who will try to tear your face off if you look at him the wrong way. He’d be more of a threat than most pit bulls I know. In addition to banning the dogs who are acting out, perhaps some kind of policy on kennel construction would go a long way toward preventing escape artists.

But check this out: If you have a pit bull and want to fly United, there’s an odd loophole in the new policy, according to Dale’s research. Just have the mandatory veterinary papers that say he’s any of the permitted breeds. The airline is supposed to go purely by the paperwork. Suddenly, pit bulls may become Labs and bulldogs.

I know most Dogster readers don’t like to fly their dogs in cargo, and I can’t blame you. Too many dogs have died on planes. But what do you think of this policy against these breeds? And would you make your pittie a poodle on paper so he could fly on United?