Next on The Scoop: Petco and PetSmart to Stop Selling China-Made Treats Linked to Dog Deaths

When a neighbor's dog attacked a four-year-old boy, Tara the cat came to his rescue. Both are fine, but the dog faces euthanasia.

By now we’re all familiar with that viral video of a cat saving a little boy from what seems to be an entirely unprovoked and rather vicious dog attack. The video has caused the Internet to erupt in a cheer of favor for “Tara the Hero Cat” — and the feline now has a Facebook page with sizable following and was even invited to throw out the first pitch at a local baseball game.

Jeremy, the four-year-old boy with mild autism who was spared from more severe wounds, is expected to make a full recovery. In interviews with the boy, the bond between Jeremy and Tara is clear and touching.

The dog, however — incorrectly labeled as a Pit Bull in some reports when it was really a Labrador–Chow mix — remains nameless.

And sentenced to death row.

More details about the dog’s situation have been revealed as the video has gained popularity. According to reports, the dog is an eight-month-old puppy who escaped from the neighbor’s yard. The neighbors were present when the incident happened, managed to restrain the dog, and were even the ones to call 911. They voluntarily relinquished the dog to authorities, who are observing the dog before having it euthanized. Jeremy’s family, the Triantafilos, will not be filing a lawsuit, and they even remain friends with their neighbors.

It’s a sign of forgiveness and good will, and no one has spoken ill of the dog (except for Jeremy, who is, understandably, a little shaken by the “bad dog”). Everyone seems to have come out of the incident fairly unscathed — the only real victim is the dog.

How did this happen and what, if anything, could anyone have done to prevent it? 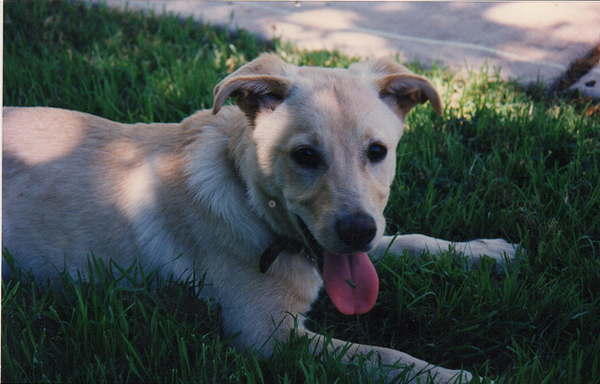 Some Dogster readers have speculated that the dog was reacting to the wheels on Jeremy’s toy bike; that, upon hearing them, the dog was driven into a frenzy. It could have been the result of past abuse by previous owners or poor socialization by the current owners. Eight months is still pretty young for a dog, but old enough to establish negative behavior — especially if the dog was adopted from a shelter or a rescue with no clue about his history.

Yet other readers have confessed that sometimes dogs are just born “defective” — with something off in their brain chemistry, possibly preventing them from ever being corrected.

What do you think about all this? How do you feel about the dog being put down? Let’s talk in the comments.