Next on The Scoop: Update: Police Arrest Four Who Shot and Tied Dog to Train Tracks

These four-legged heroes are saving lives every day in Afghanistan. The author of “Soldier Dogs,” Maria Goodavage, gives us some fascinating insights into their world.

Until the now-famous Navy SEAL Team Six raid on Osama bin Laden’s compound last year, most people had no idea that dogs are a vital part of the military. But these four-legged heroes have saved tens of thousands of lives since World War II, when the U.S. embarked on its military working dog program. 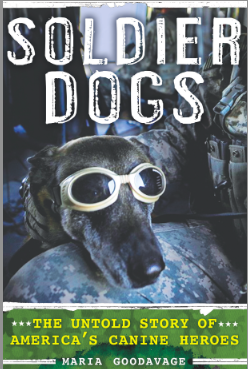 I grew up steeped in the importance of war dogs thanks to my dad, who was a very young soldier back then. He told me about the bonds the handlers had with their dogs, and how the dogs – as important as they were on missions – were just as essential for the morale of troops. His stories struck a chord with me, and I was thrilled years later when I got a chance to write a book about brave, loyal, amazing dogs and their devoted handlers.

My book, Soldier Dogs: The Untold Story of America’s Canine Heroes, was published two weeks ago, and I’m excited that after all the hard work and boots-on-the-ground reporting the book entailed, people are really starting to take notice of these incredible dogs and their handlers. The book has received a lot of attention, including a great review in the April 9, 2012, edition of People magazine, and a fun stint for me on The Daily Show. (Update: Soldier Dogs is a New York Times Best Seller!)

This puts a wag in my tail, because I am passionate about these dog teams. The more people know about them, the better off the dogs and handlers will be. So today I bring my loyal Dogster readers an exclusive look at 10 things you may really want to know about soldier dogs. All photos except the plane jumper are of dogs and handlers featured in my book. Here’s to our paws-on-the-ground heroes!

(Note from Dogster HQ: We read and loved Maria’s book and think you’ll dig it, too. Besides getting it at your local bookstore, you can order Soldier Dogs from Amazon, Barnes and Noble, or Indiebound. It’s even available as an audiobook for all you commuters in the house, at Blackstone Audio.) 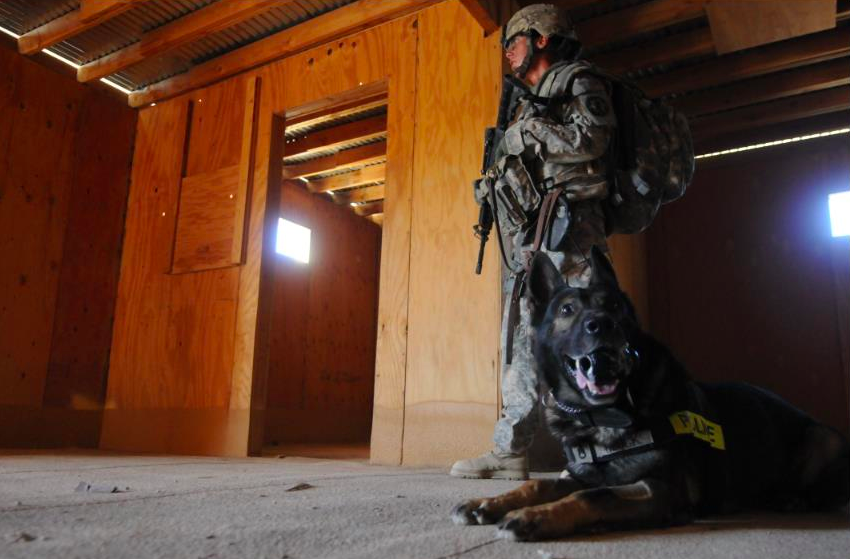 1. Soldier dogs are selected for the military based in part on their love of a ball or a Kong.

This reward is going to be part of their “paycheck” for years to come (a handler’s heartfelt praise is the other part), and they have to want the ball really badly to work as hard as they need to in order to save lives in combat situations. 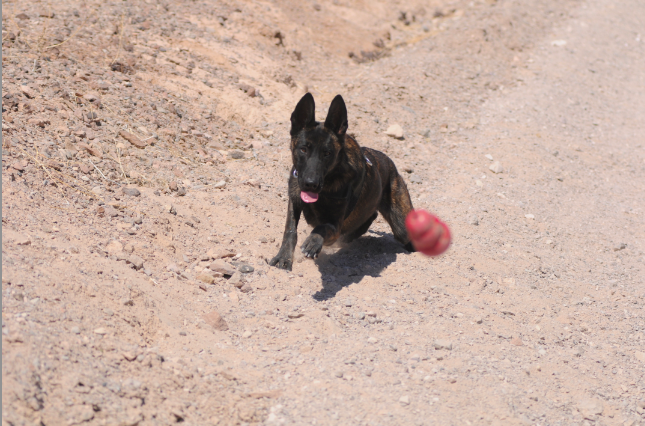 If they didn’t, they may not be the lifesavers they are. The main job for military dogs in today’s wars is sniffing out IEDs, which are the number one killer in Afghanistan. But how does a dog get to know the difference between an explosive and an interesting-smelling rock? Magic, of a sort.

A dog’s early encounters associating a scent with a reward are all about the surprising appearance of a Kong that seems to spring right out of the scent itself. Trainers hide a Kong toy or ball somewhere, and place a few drops of a scent in the area. When the dog hits the scent, he thinks, “Whoa! I’ve never smelled this before!” and shows a tiny change of behavior, perhaps stopping or wagging or tilting his head. At that moment, a trainer throws the ball so it lands right on the source of the odor, and the dog is cheered on for his “feat.”

This happens a few more times, placing the odor in various spots and having a ball “magically” land on it when the dog successfully sniffs the odor. Many dogs learn extremely rapidly to associate an odor and a ball. (Eventually they’re weaned from this and get the ball reward in a different way.) That dogs can believe the scent of something like potassium chlorate magically creates a bouncing Kong is just one of those things that makes them so loveable and endearing. 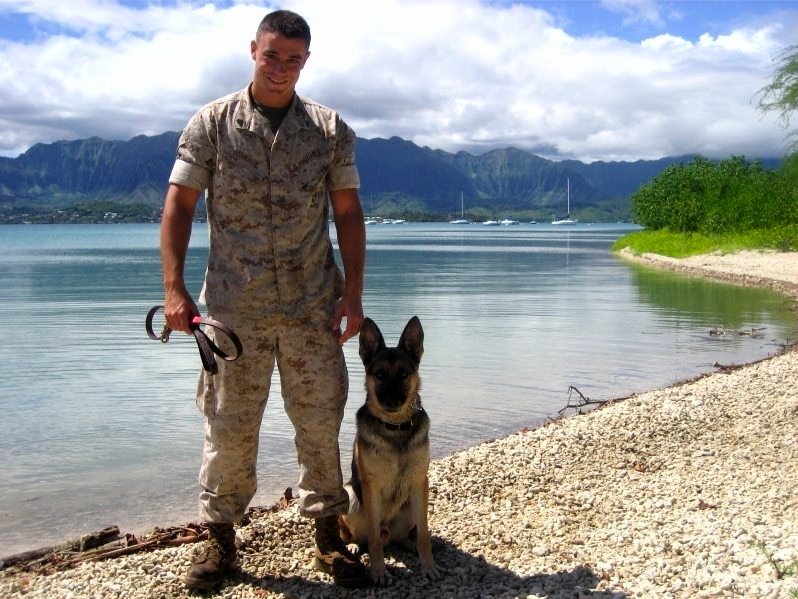 3. The bond between a deployed handler and soldier dog is like no other.

I was blown away by the love that even the toughest of these soldiers, sailors, airmen and Marines have for their canine comrades. When you’re at war and you’re together almost 24/7 (sometimes sharing a tent, or even a sleeping bag or foxhole, for weeks on end), when you depend on each other for everything, including your very lives, an incomparable bond forms. Hearing a war-hardened Marine’s voice break when he talks about his best friend is a very moving experience. 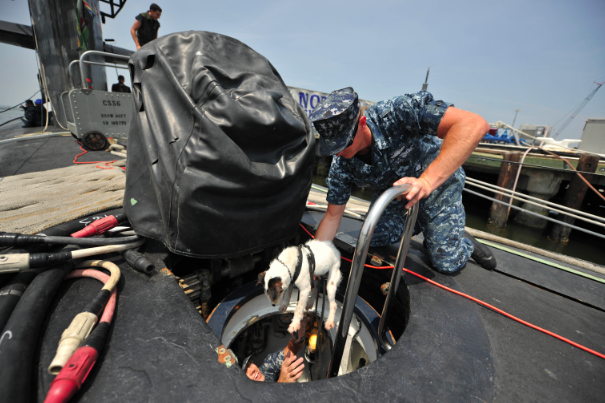 4. Not all soldier dogs are big, tough warriors.

Sure, breeds like German shepherds and Belgian Malinois are the most common war dogs these days, but affable Labrador retrievers play a major role as sniffer dogs in Afghanistan. And there are also some very little dogs in the military. But I learned that “little” does not mean “diminutive.”

I had the pleasure of meeting a Jack Russell terrier, Lars J274, on a nuclear submarine as he sniffed around for explosives last summer. He was a jaunty little fellow with a Napoleon complex. Submariners would laugh has he trotted down the narrow walkways, but he didn’t care. “Inside, he’s a big dog with a big attitude,” his handler told me. 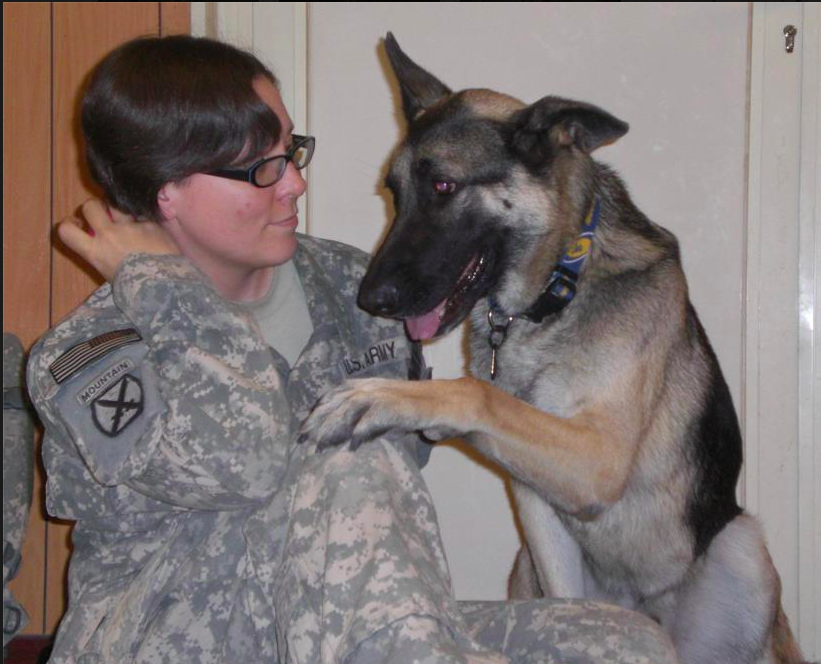 5. Dogs are the ultimate anthropologists.

They study us. They observe us. They smell changes in our very chemistry. They learn to predict us. And they seem to know when their people are having a bad day.

Rex L274 was a big, sensitive German shepherd. He had failed out of aggression training because anytime he bit someone wearing protective gear during practice, and they yelled or screamed in response, he immediately let go and seemed to look concerned and sad. So his career path changed, and he became a highly trained off-leash bomb sniffer.

His sensitivity to the people around him played out in the form of becoming a sort of unofficial therapy dog wherever he went. “He’d always find the one soldier who was having a hard day and hang out with them,” his handler, Army Sgt. Amanda Ingraham, told me. His favorite therapy was to cheer up down soldiers by getting them to play with a water bottle. After all, he liked playing with water bottles, so it would seem natural that they would too. He’d run up and bonk them with a water bottle (empty or full, it didn’t matter). Or he’d sit next to him crunching the bottle and periodically banging it against the soldier with the blues. Eventually the soldier would take the bait, and a grand game of tug-of-war or a big chase would ensue. 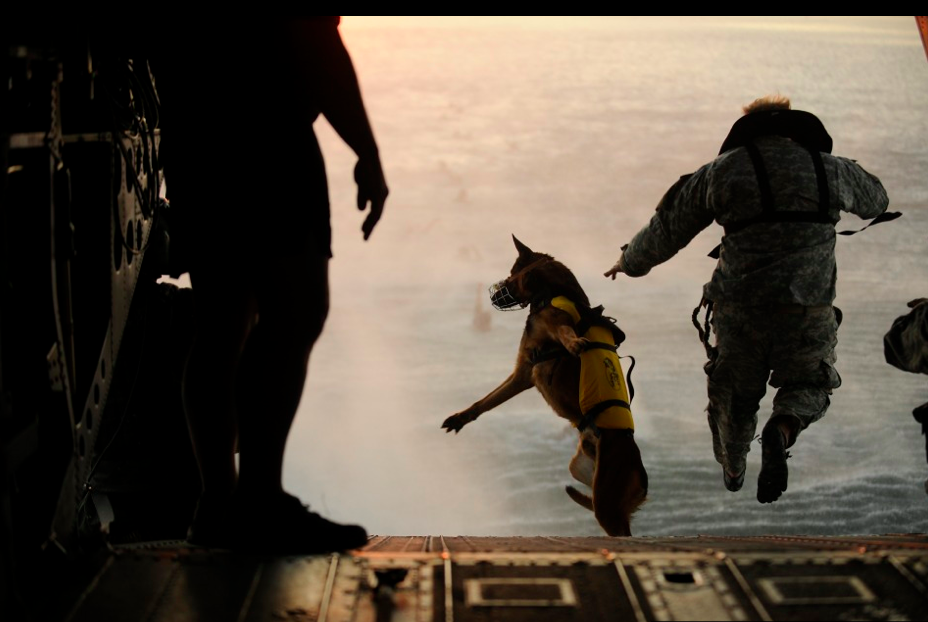 6. Some dogs really do jump from planes.

These extremely resilient, super-high-drive dogs are specially procured and trained by military contractors, not the DOD’s Military Working Dog program. Some join their human partners in parachute jumps from planes, others rappel with their handlers from helicopters. The dogs who do this are known as multi-purpose canines (MPCs), and are used used in Special Operations teams, including the Navy SEALs. They’re a tiny subset of military dogs, but can serve very important roles, as Cairo, the dog involved in the SEAL Team Six raid on the Bin Laden compound, demonstrated. 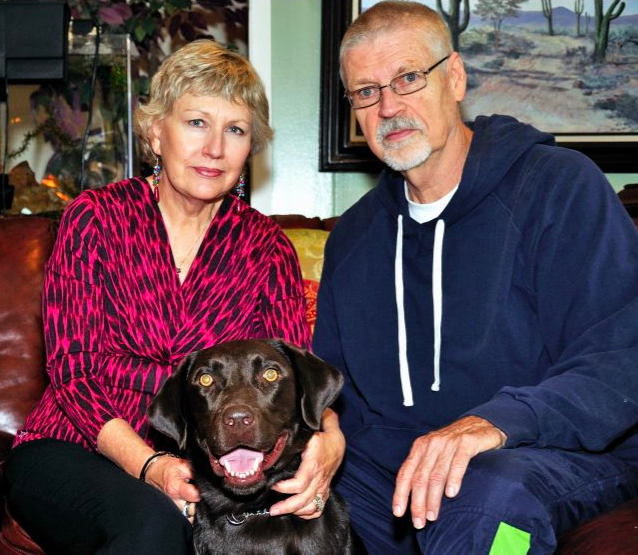 7. Soldier dogs can get PTSD.

Until last year, canine post traumatic stress disorder wasn’t officially recognized by the military, but now that it is, it’s being taken very seriously. Signs of Canine PTSD include hypervigilance, increased startle response, attempts to run away or escape, withdrawal, changes in rapport with a handler, and problems performing trained tasks – like a bomb dog who just can’t focus on sniffing out bombs any more.

As with people, some dogs can go to hell and back and not be badly scarred. Others are profoundly affected by less. There are treatments, but they aren’t as effective as they need to be. Research into canine PTSD is in its infancy, but I hope it will one day soon offer some better solutions for the dogs who are suffering so.

While at Lackland Air Force Base, which is where most military dogs get trained, I visited the base’s adoption kennels and was greeted by the loads of barking, energetic dogs. But this one beautiful chocolate Lab, Buck P027, was curled up tightly, staring out into nothingness. It turns out Buck had been a bomb dog in Afghanistan. He may have seen too much action or been close to one too many explosions. It was really heartbreaking to see this dog who was crushed by PTSD lying alone. Thankfully the next day he went home with a couple who loves him to pieces. They’re working on helping him through his PTSD every day. I am in touch with them and get regular reports on his progress. 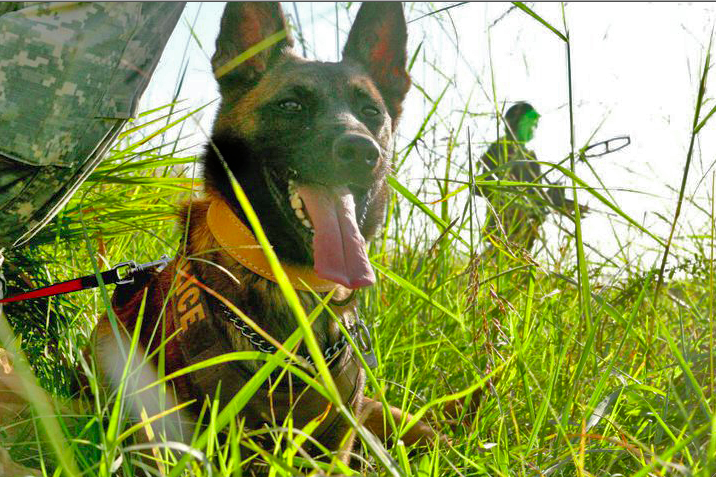 8. Soldier dog names can be downright embarrassing to their handlers.

Dogs are named by their breeders, who are hail from places like the Czech Republic, Slovakia, the Netherlands, and Germany. There are plenty of regal or at least normal names, like Rex, Nero, and Rocky. And then there are the unfortunate or oddball ones. Imagine being downrange in a life-or-death situation, and shouting for “Baby Cakes!” “Baby Bear!” “Busty!” or “Moo!” Yes, those are real military working dog names.

Male dogs sometimes have female names, like Kitty, or Freida, and vice-versa. The handler of Freida said it was very awkward calling his name. He swears the breeders are just messing with American handlers, and I have a feeling he’s right. 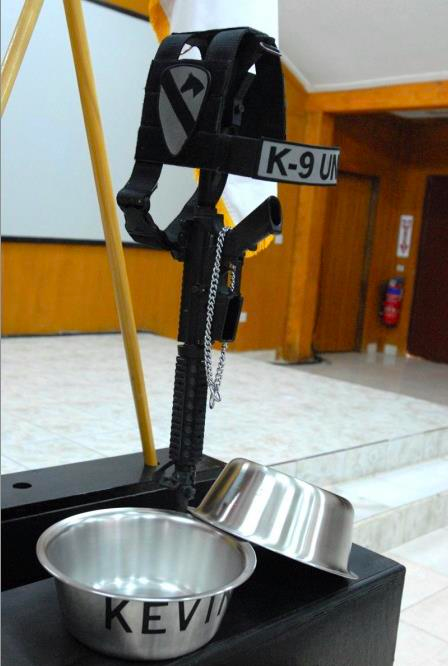 9. When soldier dogs die, their memorial services will rip your heart out.

Their bowls are placed upside down, to symbolize that they won’t need them anymore. Their collars and leashes are hung up in remembrance of the dog. And if the memorial is at a kennel, the dog’s kennel door is left open, indicating the dog will not be returning home. The handler, or someone who can handle the heartbreaking duty, reads a poem called Guardians of the Night. I can’t even think about it without tearing up. A lot of handlers can’t either. 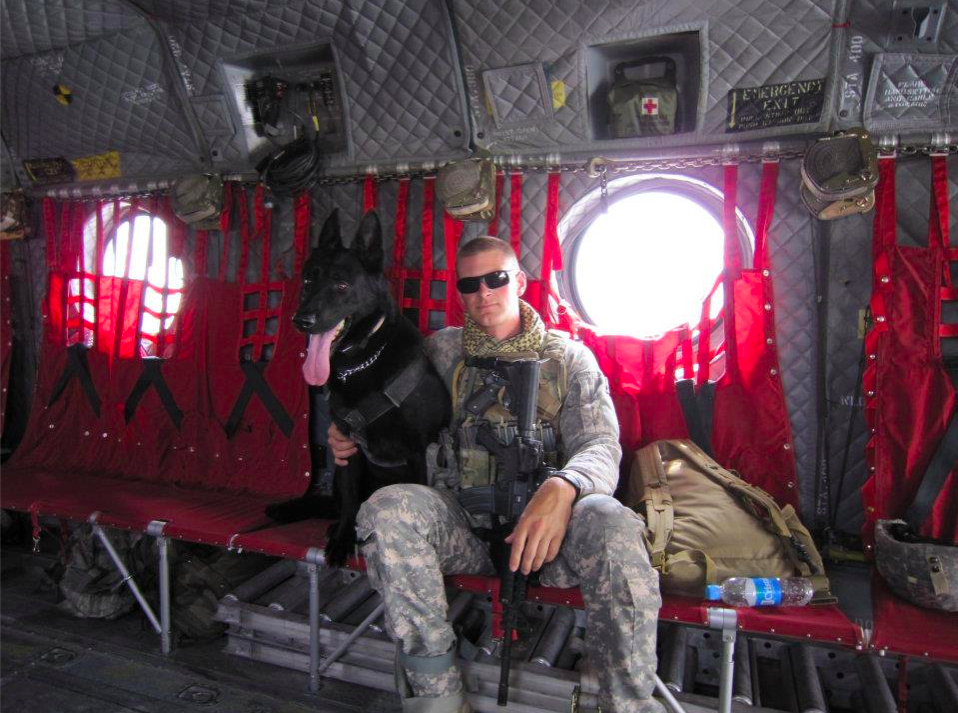 Most handlers consider their dogs their best friends, but to the DOD, military working dogs are still officially equipment.

“I try to articulate dog is not a piece of equipment, but a working, breathing animal that needs to be treated respectfully and kindly,” says Air Force Senior Master Sergeant Antonio (Arod) Rodriguez. “Your dog is your partner, and values meaningful interaction. You just don’t think about equipment in the same way.”

There’s some fantastic legislation in Congress right now that seeks to change this status. You can read about it in a post I wrote for Dogster. In it I explain how you can weigh in on this very important bipartisan bill, The Canine Members of the Armed Forces Act. These dogs deserve all the support we can give them.