Next on The Scoop: Texas Takes First Step in Fighting Police Shootings of Dogs
In the News

Smuggler Mountain in Aspen Is Blanketed in Dog Poop

Hikers are not picking up their dogs' poop, leaving a giant mess for others to clean up. Volunteers picked up 100 pounds in March alone!

Aspen is a glitzy ski destination, but the dog who wants to be seen eventually ends up on Smuggler Mountain.

Where he inevitably goes to the bathroom, which his owner blithely ignores, leaving another rich deposit to add to the countless piles. Such is life atop Smuggler Mountain.

What we mean is: Smuggler Mountain is full of dog poop, and people are sick of it.

How much poop? Well, last month, six volunteers, braving the stench and armed with durable trash bags, started picking up feces in the first quarter-mile of the trail, which is the hotspot for dogs doing their business.

They picked up 100 pounds of poop. 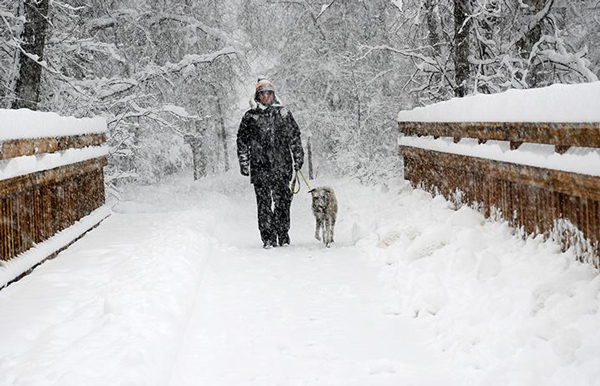 “It has been disgusting this year,” Pitkin County Open Space and Trails Senior Ranger John Armstrong told the Aspen Times at the time. “I don’t know who they figure is going to pick it up, but there’s not a poop fairy.”

But that was then, and this is now: And now there is more poop. People didn’t get the message. Dog walkers, faced with a fresh, poop-free trail — with bag stations and trash cans for the waste — promptly went back to their habit of ignoring their pooping dogs. Armstrong told the Aspen Times that he flagged 50 or so piles recently, calling his sad march among the piles “deja poo.”

“I’d say that’s a pretty poor report card,” he said. “Where do we go from here? The community can’t be proud of that.” 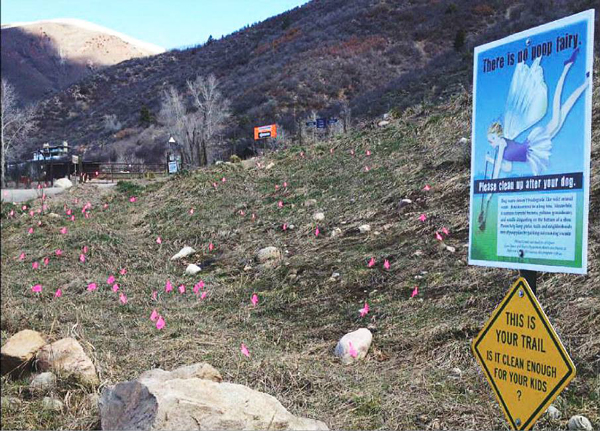 Armstrong is especially shocked considering they have been enforcing a $100 fine on a first offense for owners not picking up their dogs’ poop. Now, Armstrong is considering stronger methods, such as reconstituting the leash law on the first half-mile of the trail. He’s also considering the daddy of poop enforcement: DNA testing.

“We could talk about doing that here,” Armstrong said. “We could look at higher fines, or cameras.”

Whatever method he chooses, Armstrong has had enough of irresponsible dog owners.

“It’s not society’s responsibility, it’s certainly not the tax payer’s responsibility, to pay for the cleanup of that dog,” Armstrong told the Times last month. “We’re happy to haul the waste off — we have three trash cans on Smuggler Mountain, we have bag stations — and that’s our responsibility, we maintain that. We literally haul off thousands of pounds of dog waste every year.”