Next on The Scoop: Quiz: How Well Do You Know the American Kennel Club’s Top Dog Breeds?

Josh Kelly died before graduation, but the Pit Bull who attended classes with him was there.

Earlier this week, I wrote about all the ways that someone can hurt or even kill themselves during an epileptic seizure. Here, unfortunately, is an excellent example of that: Josh Kelly, a student of geosciences at Idaho State University, didn’t make it to his graduation last weekend. His seizures killed him in February. But the service dog who served him well in life, a Pit Bull named Cletus, was there to collect the degree that Kelly worked so hard for.

I’ve always been lucky; my seizures are pretty easily controlled and are thus triggered mainly by my own stupidity. That is, me forgetting to take my meds. Kelly’s condition was so severe that the seizures caused memory problems, and he was on disability. The memory loss made school difficult, especially in math classes, but Josh continued to attend. At the time of his death, he was taking Calculus II for the third or fourth time, according to his mother, Lynne. 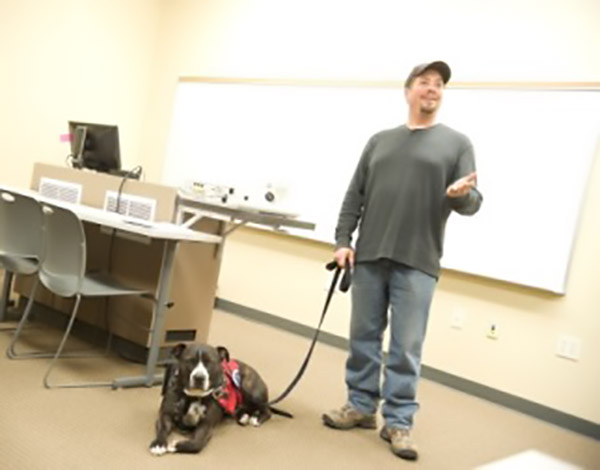 “He walked almost two miles every morning and evening to catch that bus in Idaho Falls, regardless of the weather,” Josh’s father, Terrell, told the ISU paper. “His education was extremely important to him. He became my hero. I thought it was really amazing how committed he was to his education despite everything he faced.”

Cletus was there through the whole process, which makes it appropriate that on Saturday, Terrell Kelly and Cletus walked onto the graduation stage to accept Josh’s posthumous degree.

“Many times on the way to the bus Josh would have a seizure, and he’d call and we wouldn’t know exactly where he was but Cletus would bark and cause a commotion until someone would come,” Terrell Kelly said. “I don’t know how many times Cletus saved his life.” 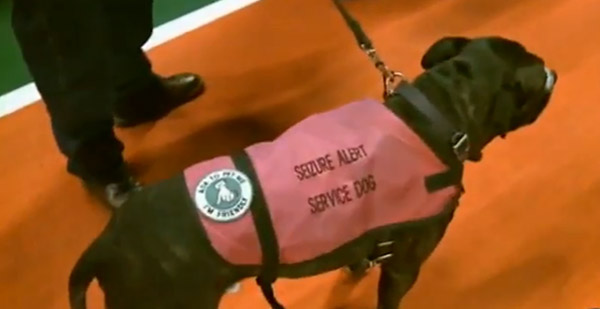 But ultimately, even Cletus couldn’t save Josh. He went into intensive care and on Feb. 13, he passed away.

Given that Pit Bulls are commonly portrayed as the go-to breed for drug dealers, neo-Nazis, and dogfight enthusiasts, a lot of people were doubtful about the choice of Cletus as a service dog. Terrell Kelly admits that he was one of those, but ultimately, he couldn’t have asked for a better friend and protector for his son.

“I’ll be honest,” he told the local ABC affiliate. “I was one of them that was giving them a bad rep until I met Cletus. And he allows our little grandchildren to climb on him, pull his ears, pull his tail. He’s just great.” 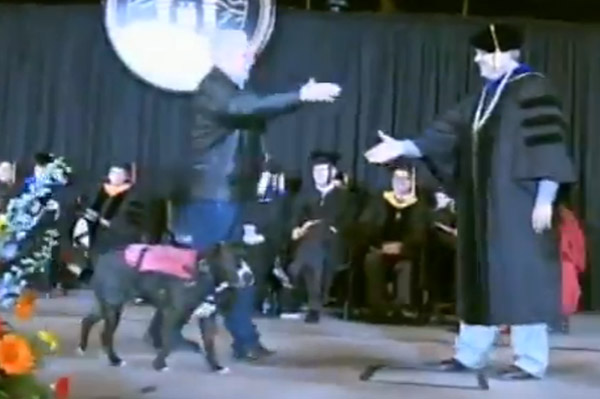 As touching as it is, there are two things that make me a little cranky about the reporting of the story of Josh Kelly and Cletus, especially the ISU article that’s been republished in several places. First, the article says that Josh “succumbed to his disease.” Epilepsy is a lot of things, but it’s not a disease, which implies a fairly specific set of causes and effects. It’s actually an incredibly vague label that covers a number of neurological disorders with different causes and different manifestations. The word “epilepsy” refers to a long-term pattern, showing that the brain has an underlying tendency to have seizures if not treated.

Second, there’s the use of “grand mal” which has been out of use in medical circles for a long time now, even though it persists in general culture. Most of what used to be called “grand mal” now fall under the category of “tonic-clonic” seizures.

But that aside, the true point of the story is that Josh had a friend who served and protected him well, and he probably wouldn’t have gotten as close to his degree as he did, had Cletus not been by his side. Our condolences to the family.

Via ABC and ISU Headlines