Next on The Scoop: This Facebook “Event” Uses Dog Pictures to Support a Teenager With Leukemia

Sarah Palin Posts Photos of Trig Standing on His Dog

"Chill. At least Trig didn't eat the dog," she responds after criticism mounts.

I have a six-year-old boy, and if I ever saw him preparing to use our dog as a stool to reach the sink to wash the dishes, I would not grab my phone and get the camera ready.

And if he did end up using my dog as a stool to reach the sink and wash the dishes — by stepping on him — I would not take pictures of the event and then post them to Facebook.

A child could get the wrong idea about standing on dogs, you see, like it’s an OK thing to do and not utterly wrong. Encouraged by someone holding up a camera and gurgling praise, he might do it again — and again and again and again. One time he may really hurt the dog.

And any of my five million Facebook friends could get the wrong idea as well. 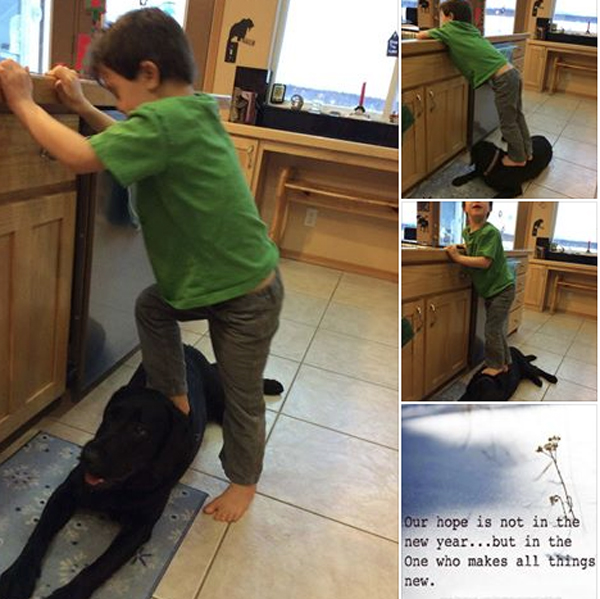 Sarah posted those gems on New Year’s Day with the following note:

May 2015 see every stumbling block turned into a stepping stone on the path forward. Trig just reminded me. He, determined to help wash dishes with an oblivious mama not acknowledging his signs for “up!”, found me and a lazy dog blocking his way. He made his stepping stone.

Criticism flowed, naturally. So did support and undying love. That’s the natural order of things on Palin’s Facebook: outrage, love, outrage, love. There were comments — more than 26,000 comments. And Likes — more than 72,000 Likes.

In the face of all this, Sarah did not pause, consider the wisdom of letting her son stand on the dog — the pros and cons of dog standing, as it were — and compose a reasoned response. She weaponed up. She blasted … PETA. She started like this:

And then she went into this:

Did you go as crazy when your heroic Man-of-Your-Lifetime, Barack Obama, revealed he actually enjoyed eating dead dog meat?

Then she talks about the Iditarod and commercial fishing, and finally unloads this multifaceted, world-splitting sentence:

Aren’t you the same anti-beef screamers blogging hate from your comfy leather office chairs, wrapped in your fashionable leather belts above your kickin’ new leather pumps you bought because your celebrity idols (who sport fur and crocodile purses) grinned in a tabloid wearing the exact same Louboutins exiting sleek cowhide covered limo seats on their way to some liberal fundraiser shindig at some sushi bar that features poor dead smelly roe (that I used to strip from our Bristol Bay-caught fish, and in a Dillingham cannery I packed those castoff fish eggs for you while laughing with co-workers about the suckers paying absurdly high prices to party with the throw away parts of our wild seafood)?

Finally, she gets down to the matter at hand: Standing on dogs. Sort of:

Our pets, including Trig’s best buddy Jill Hadassah, are loved, spoiled and cared for more than some people care for their fellow man whose politics may not mesh with nonsensical liberally failed ways or don’t fit your flighty standards. Jill is a precious part of our world. So is Trig.

Well, maybe she doesn’t; the wisdom of standing on dogs is never addressed. We can safely assume that the Palins love their dogs — Jill is a service dog to Trig, who has Down Syndrome — but really: Don’t let kids stand on dogs, and don’t post pictures of kids standing on dogs to your five million Facebook friends. It’s simple stuff. No reason to drag Alaskan caviar into it. 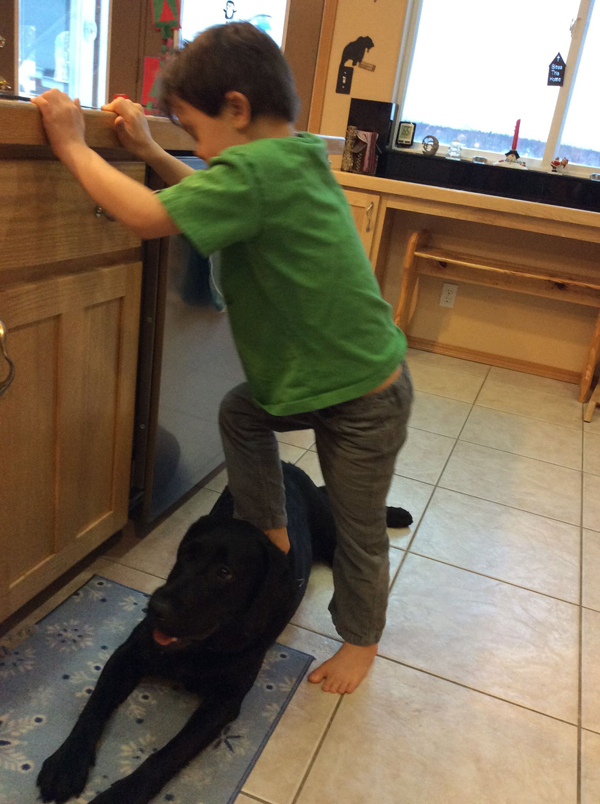 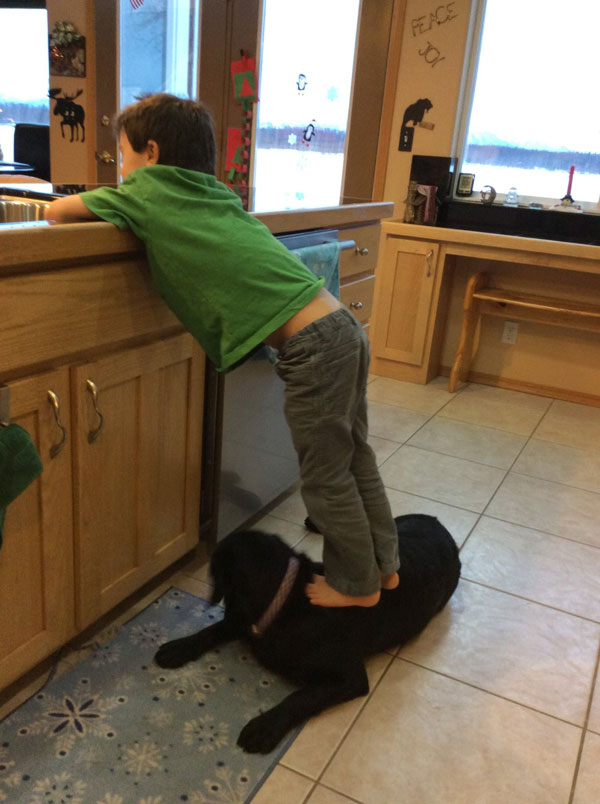 What do you think? Do you think Sarah should have told Trig to quit standing on the dog dammit instead of posting photos of it? Let us know in the comments.