Next on The Scoop: An Open Letter to Parents — From a Dog

In the post, the satellite radio DJ describes in heartbreaking detail what Zoe, a 16-year-old rescue dog, meant to his family.

Satellite radio DJ Richard Blade posted a long, heartbreaking remembrance of his dog Zoey on his Facebook page this week. I won’t say that you should absolutely go read it. It’s a raw, intimate piece, and the very things that make it so strong will also make it very hard for many people to read. But if you can, if you think you can read through almost 3,000 words about two people standing by their dog in her last moments, I advise you to read it.

It is not the story about an owner taking his dog in to the vet to have her put down. That would be much easier to read, and, I suspect, much easier to write.

Zoey was 16 years old, and she had been part of the family for almost that entire time. In 1998, Blade’s wife, Krista, found Zoey on a sidewalk in Woodland Hills, California, and brought her home. For the last two years, Zoey has been fighting “a particularly malignant form of oral cancer,” Blade says. It’s that cancer that killed her on Feb. 17. The first signs of real trouble came when she jumped into the air and barked at some invisible coyote hiding in the hills behind Blade’s house:

It was just a little jump, her front paws barely leaving the ground, but as they came back down I knew instantly that something was wrong. She suddenly seemed weaker and her bark changed to a wheeze. And then, horrifically, it became a gasp. I ran over and cradled her in my arms. Her mouth was filling with foam. I pulled off my shirt and wiped the foam away as quickly as it would form and elevated her head to open her airway. Strangely she didn’t seem distressed and panicked. It was almost as if the oxygen was shut off to the brain and mercifully was alleviating the terror that goes through your mind when you can’t get air. 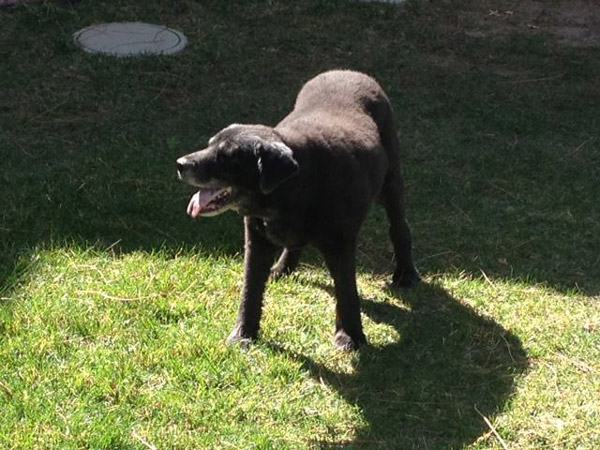 According to the vet who knew Zoey’s medical history, something must have caused a tumor to move or burst, and at that point, there was little to do except make her comfortable. Blade’s description of the next few hours is excruciating. His wife speeds home from a concert, making it just in time to say goodbye.

Blade’s post is full of grief and agony, but it’s as much about Zoey’s life with him and Krista. In a way, those are the most painful parts to read. As horrible as physical pain is, it never lasts as long as the loss that follows, and when Blade remembers the 16 years with Zoey, you get a sense of how deep that loss cuts.

Zoey had many adventures with us and made our life so much better. She went to the beach and to the snow, and when I quit KROQ and moved to the Caribbean she came with us. We drove across the country to Miami so we wouldn’t have to fly her and Angel – and Soxy our cat – so far, and she loved the drive. She quickly came to love the warm water of the tropics and the soft ocean breezes. She would lay for hours on our deck with the wind ruffling her fur. And for such a gentle, loving dog, she was tough! She survived tick fever, a black widow spider’s bite, an attack by a German Shepherd and a rattlesnake strike to her face that put her in hospital for two days. The only thing she couldn’t beat was cancer.

If you think you can bear to read it, do so. But death and loss is so familiar, so real, and so inevitable in relationships with dogs and humans, that you could hardly be blamed for looking away.

Our deepest condolences to Richard Blade, Krista, and the rest of their “furry family.”

Posted in Grab a Tissue,