Next on The Scoop: Medicine That Tastes Good? It’s a Bad Idea for Dogs

The dogs had the time of their lives. So did the adopters. The photographer had a rougher go of it!

Five years ago, the Pit Bull advocacy group BAD RAP left Virginia with 10 of Michael Vick’s dogs “secreted” in the back of its RV, according to ABC News. The group had worked with prosecutors on the case to identify which dogs could be rehabilitated.

All of them went to good homes, and all are doing well. Last month, seven of the dogs were reunited for a photo shoot and a celebration.

They have a lot to celebrate. If there was any question in the public’s mind that Vick’s abused dogs — trained to fight — could not only be rehabilitated but turned into loving, happy dogs, it’s gone.

All seven have Canine Good Citizen Certificates. Three work as therapy dogs in hospitals and children’s literacy programs. One, Jonny Justice, appeared on the Rachel Ray Show and won GUND’s Top Dog contest — his likeness will soon show up as one of GUND’s famous stuffed dogs.

“They’re very forgiving, and they all really enjoy other dogs, which is probably the other big surprise that came out of the case,” said Donna Reynolds, director of BAD RAP. “In fact, dogs were a comfort to them.”

“Dogs live in the moment; they don’t dwell on the past,” she continued. “Once they have enough positive experiences to draw on, they just run right into the present.” 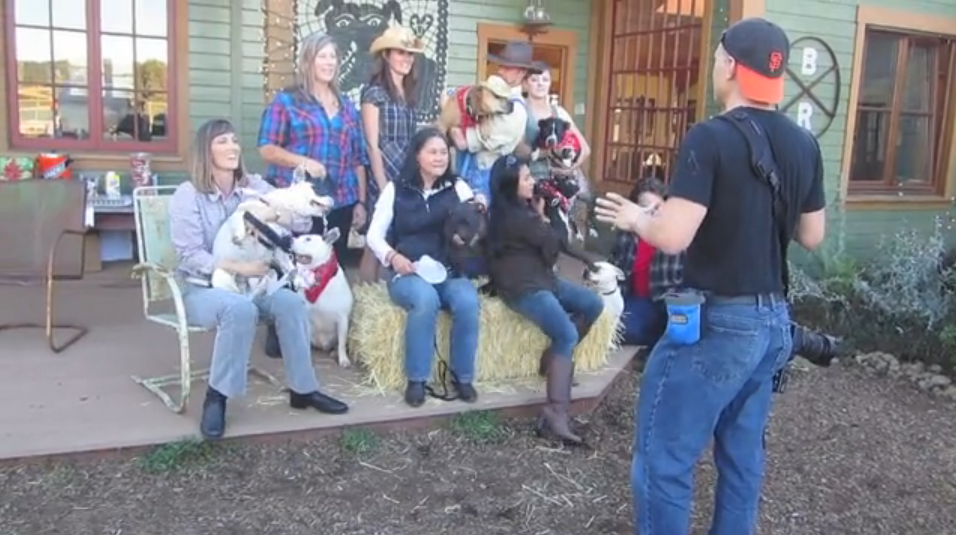 And the present is a fun place. At the reunion, the dogs had the time of their lives — what dog wouldn’t, surrounded by a pack of well-adjusted, happy dogs, all of whom happened to look a lot alike?

“There were lots of hugs, kisses, lots of crying. When people meet these dogs, they cry,” Reynolds said. “They understand that they are little pieces of positive history.”

The only one who had trouble was the photographer, Mark Rogers. Imagine trying to wrangle seven wiggly dogs and their adopters to one good picture.

Actually, you don’t have to imagine it. Watch the wiggly wiggliness of the photo shoot right here:

Getting the Shot! from BADRAP.org on Vimeo.