Next on The Scoop: The 12 Dogs of Christmas: Rosie the Chihuahua Tops Our List!

Grab a Tissue: A Childhood Pet Visits His Owner’s Hospital to Say Farewell

Mike Petrosino is dying of cancer, but he was able to smile when his old pal Rusty the dog visited him in the hospital.

Just yesterday, I wrote about how a video of a Siberian Husky pup learning to howl showed how closely we bond with our dogs; how they become part of our lives and our families, and how their companionship is deeper than the adorable pictures on greeting cards.

Today, a picture is going around the Internet that shows the other end of that bond. The video I posted showed a pup, only 20 days old, learning to speak with his human. The picture that is going around shows a dog visiting his owner, 21-year-old Mike Petrosino, in the hospital. 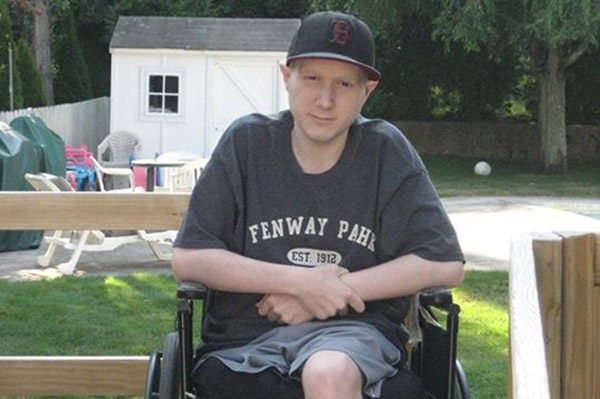 Mike was diagnosed with cancer shortly before his 14th birthday. His right leg and pelvic bone were amputated to try to contain the cancer but despite the surgery and hundreds of chemotherapy, the cancer has continued to progress. Now it’s over. Doctors don’t expect him to live to the end of the year.

The photo, which was posted on Reddit four days ago, shows Mike greeting his childhood pet, Rusty, for what is certainly the last time. Mike’s brother John, said of the meeting that “Rusty was very emotional when Mike said his final goodbye. Every time I come home these past two days, he sits near Mike’s favorite couch and whines, which is rare from him.” 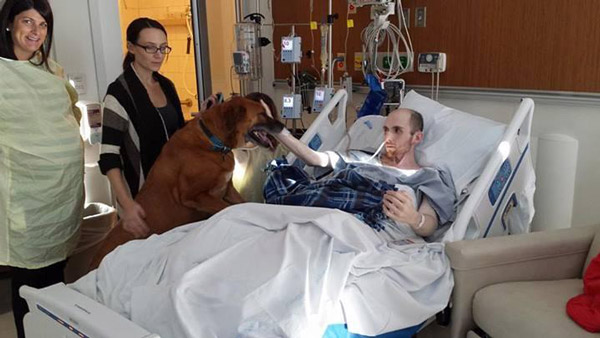 The picture was posted by one of Mike’s friends, who uses the name 7thEvan; it immediately got thousands of comments and was shared across the Internet. In the comments, Evan wrote, “Two days ago we found out that after 8 years, the amputation of his leg, and four rounds of cancer that there’s now nothing that they can do. This picture was taken by his brother yesterday. I just got back from Mass General and got to say goodbye with a bunch of old friends. He’s the bravest guy I’ve ever met and all he did the entire day was make sure everyone else was okay.” He said also that “Seeing Rusty come visit was one of the few things that has been able to make his brother John smile.”

Having the photo go viral has done more than just get expressions of sympathy for Mike and his family. In June, his mother started a crowdfunding project to help with the emedical expenses that the family will have to deal with even after his death. As of this writing, the project has made almost double its original goal of $10,000, and donations continue to come in.

We write a lot about dogs who die for one reason or another, whether through abuse, accidents, or euthanasia. As Mike’s case shows, sometimes the dogs are there to see their owners off as well. Our heartfelt condolences to Mike and his family.