Next on The Scoop: This Video is Adorable — But the Pup’s Story Could Have Been Heartbreaking

Puppies With Guns 2015 Calendar Will Happen

A Kickstarter campaign for the project blew through its goal, so now we have this to look forward to.

It will happen. The Kickstarter page for Puppies With Guns 2015 Calendar has shot through its $2,500 goal and is taking aim on the holiday season. Yes, a calendar of puppies and guns. Puppies, guns. Simple. Cute. Terrifying. But one question: Why puppies and guns? Let’s turn to some choice quotes from the project’s Kickstarter page:

This project brings [together] two of the greatest things on earth: firearms and puppies.

No combination of two items has ever created more feelings of ire or joy than newborn canines and bitchin firearms.

Our intent was to bridge the gap between two total extremes; puppies looking goofy and super cute and top-of-the-line and boutique firearms.

Rarely do you see a Chinese Crested and a SPAS hanging out together in a tea room, and we thought that was wrong. Why shouldn’t cute little dogs and kick-ass guns be best friends? 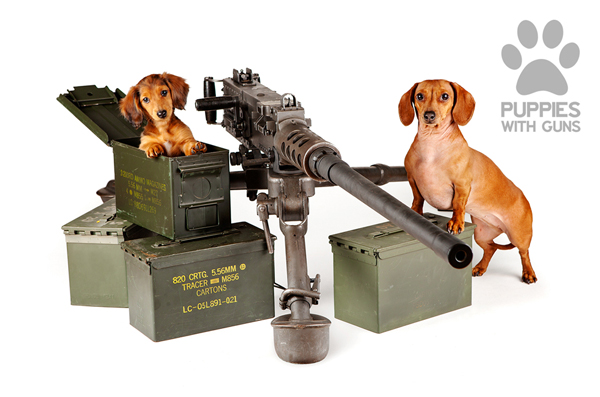 Yes, clearly these guys are having a rollicking good time with this whole thing. It was a lark at first — “It started out as a joke between two bored roommates who had an incredibly cute new dog and a pair of awesome Glocks” — and then it wasn’t: “It turned out to be badass, and everyone else wanted their dog’s photo with some sort of artillery.”

So: Puppies with guns. At first, they didn’t think of a calendar, but instead “tried selling gigantic prints of Boston Terriers with Short-Barreled Rifles at intersections and off-ramps of major highways.”

Wait, sorry, that was a joke. These guys are funny. Here are some more pictures: 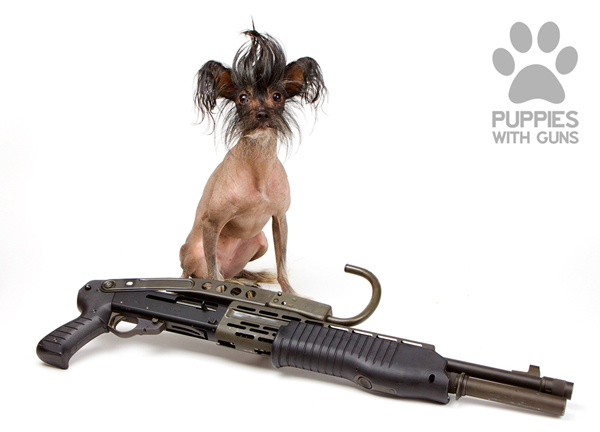 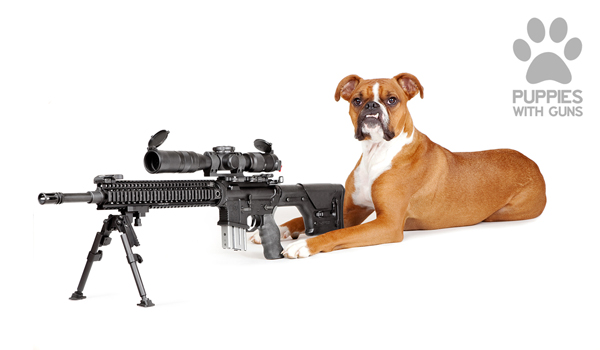 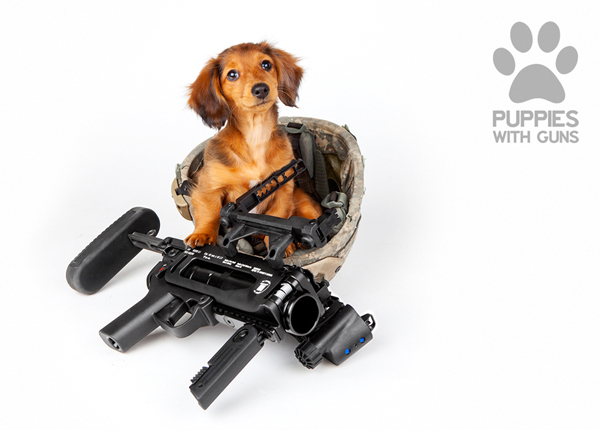 So, now that they’ve brought “newborn canines and bitchin firearms” together at last, what’s next for them?

“We’re already busy putting together the next PWG creation so that your life isn’t devoid of cuteness and firepower.”

The Kickstarter has already raised three times its goal — it currently has nearly $9,000 — but curiously nobody has picked up the $500 pledge reward: A picture from the calendar in a hardwood frame.

“If we can arrange it, we’ll get Billy Mays to deliver it,” the organizers write. “No promises, but we’ll try.”

Billy Mays! To be honest, that’s a fairly decent reward considering the famed pitchman is notoriously … oh, wait, that’s a joke too? 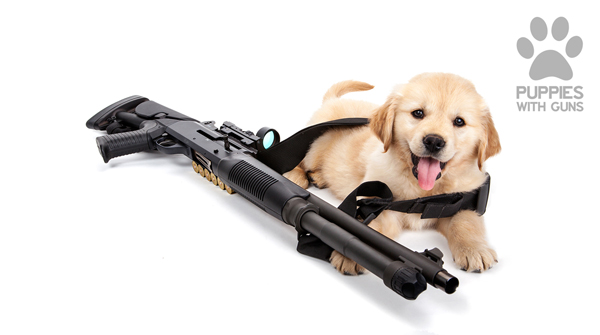