Next on The Scoop: Barkworthies Recalls Chicken Vittles Dog Chews

Vid We Love: Frankie the Pug Take the Cutest Pee

His trick of doing a handstand while peeing looks cute -- but there might be more to it than showing off.

Practically every dog owner has, at one time or another, tried to get their dog to do tricks. For the most part, the tricks are fairly simple: fetch, play “dead,” beg for food, and so on.

Then there are some dogs, like Frankie the Pug, who take their tricks to the next level. Whether that’s a desirable thing or not is up to you, but based on the video below, he does have some … unique habits.

The video shows Frankie taking a long, refreshing pee (well over a minute) while strolling around on his front paws. Like I say, this may not be your preferred kind of trick — or for that matter, your neighbors’. Most dogs just lift a leg to mark a corner; Frankie, on the other hand, seems like he’s determined to mark the whole freaking neighborhood, just to clear up any misconceptions about who’s running the place. 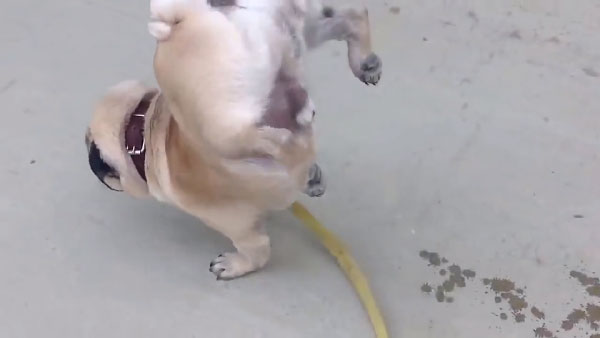 Very good for Frankie, of course, but if this kind of volume is standard for him, I can see the novelty wearing thin if you happen to be one of the neighbors.

Frankie is apparently a resident of Russia, where he lives with his owner Olga Ostashinskaya. While his style of urinating is unusual, it’s not unique. Handstand peeing has been observed in other breeds of dogs, such as Chihuahuas, and even other species, such as panda bears. In 2012, a study on the mating habits of pandas theorized that they did handstands in order to leave their urine higher off the ground, maximizing the distance that their odor spreads.

There might be a similar explanation for why Frankie and other dogs occasionally do their thing while standing on their front paws, but alas, it doesn’t seem to be working. All the pee just goes straight onto the concrete, just as if he’d stayed on all fours.

Whatever the reason, he does look pretty darn cute and funny doing it. As long as you’re not the one cleaning the sidewalk, of course.