Next on The Scoop: 5 Reasons Dog Owners Should Hate the Plastic Bag Ban

A Facebook group plans to demonstrate in all state capitols tomorrow. But have they done the groundwork to pull it off?

Tomorrow, dog lovers hope to make a statement against cops who gun down dogs without reason. At noon, local time, activists are planning to march on the capitols of all fifty states under the banner of “Freeze Don’t Shoot.”

More people than ever are becoming aware that police officers aren’t necessarily the benign guardians of peace and security we see on television. Thanks to the fact that almost all of us are carrying miniature video studios in our pockets, it seems like every week brings a new example of how casually police use force against animals and humans alike. While Black people in Missouri are still marching in protest of the murder of Michael Brown, dog lovers are staring in outrage at the video of a Texas police officer who called a dog with kissing noises and then put three bullets into him.

We deserve to have police who make us feel safe instead of posing one more threat to us and our loved ones. I would love for the “Freeze Don’t Shoot” protests to be successful. Every time I write about a cop shooting a dog for no good reason and every time I read stories like those of Michael Brown, John Crawford, or Oscar Grant, a little part of me dies. I want to have all of those parts back.

So, I really want the Freeze Don’t Shoot protests to work. I want them to accomplish something. But looking over their online presence, I don’t have a lot of hope.

Unfortunately, while the idea of marching on 50 state capitols in one day sounds like a good way to turn up the volume on a much-needed conversation, it’s also a massive undertaking. Organizing a single demonstration is difficult enough. It involves coordination among organizers, media outreach, a coordinated message, and a lot of people who are committed enough to come out and march. 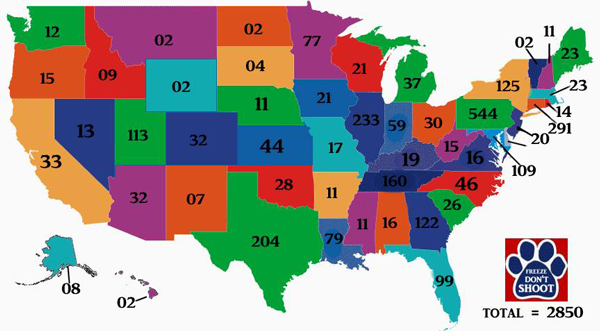 Freeze Don’t Shoot is aiming to do 50 of those. In one day, at the same time. To do that would be an exceptional accomplishment. From the looks of it, Freeze Don’t Shoot has neither the media savvy nor the organizational infrastructure to do so.

One excellent point about the demonstrations was brought up by a woman in the group: Why are they on a Saturday?

Someone just asked me a very good question so I thought I would pass it on to this group….why was this march scheduled for a Saturday when the capitols are all closed. There will be no legislators there to see us and as far as I know the building is closed to visitors as well, so there won’t be any visitors to see us. Just wanted to be able to give people an answer when they pose this question to me. I planned on attending but never thought about the fact that the people who need to see us so they can propose laws will not be at the capitol on a Saturday. I would really like to be there on a day when the legislators are there so they can see the support for these much needed laws.

Like a tree falling in the woods, if there’s a protest and no politicians or news teams are there to hear it, it didn’t happen. There’s a reason why, if you want to make sure a story doesn’t get wide coverage, you release it just before the weekend. 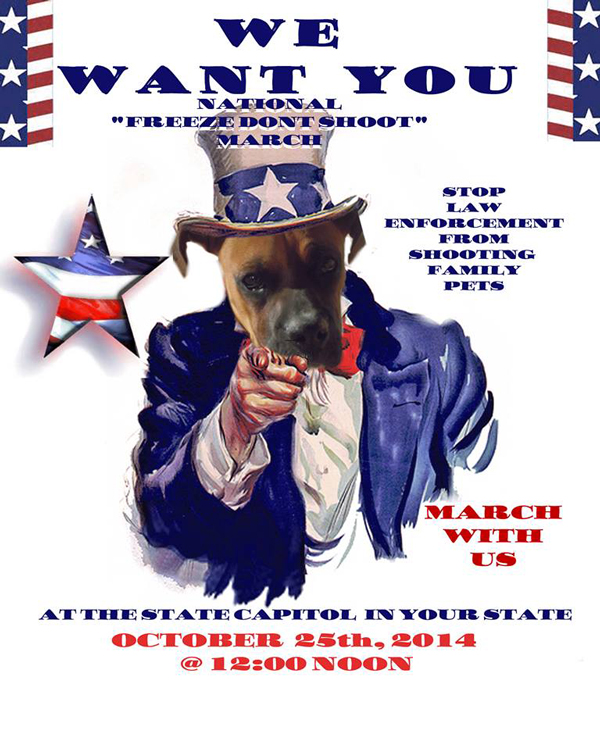 Further, the group doesn’t seem to have done much social media work other than the Facebook page, which has only existed since July. The Twitter feed for @official_fds is completely blank, without so much as an avatar. There are Freeze Don’t Shoot Twitter feeds for individual states. Unfortunately, they have little activity as well. The Freeze Don’t Shoot Iowa account (@FDSIowa) has 37 followers and 14 tweets, the most recent of which was October 7. The Minnesota Twitter account is a little more active, with 41 tweets and 145 followers. The account for Arizona, the home state of Freeze Don’t Shoot founder Donna Earley, has only 11 followers and 136 tweets.

Not only does Freeze Don’t Shoot seem to have completely abandoned one of the most valuable networks for modern activists, but they haven’t even developed their own website. Go to FreezeDontShoot.com, and less than 24 hours before they’re slated to start their nationwide demonstrations, there’s nothing more than a “Coming Soon” card. 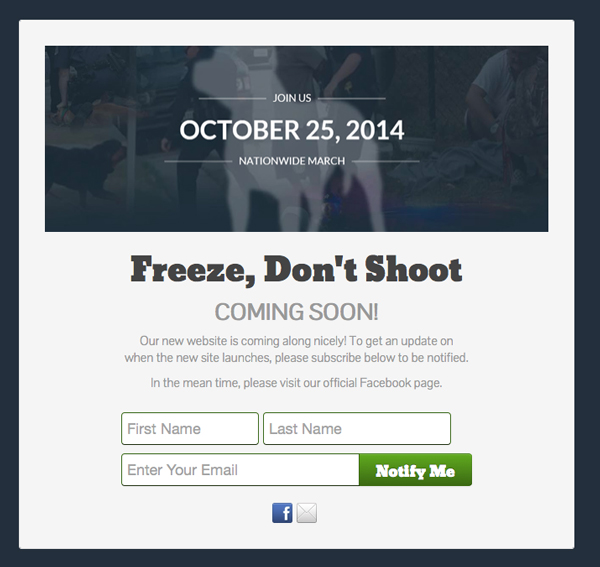 In an interview with Vocativ.com, Earley said “People are downright frickin’ angry, and they want police to stop shooting family pets…. If you have a dog, you’re at risk. It doesn’t matter if it’s a Poodle or a 100-pound Rottweiler.”

People should be angry. Whether we’re talking about human beings or dogs, the behavior that we’re seeing by police across the country is a betrayal of the trust that society invests in them. It is a betrayal of the most basic values of democracy. For that message to get across, I think that we need much better organizing from the people who care.

If you are interested in attending the Freeze Don’t Shoot demonstration in your state, you can find info here.