Next on The Scoop: City Remembers Its K9 Officers With Their Own Cemetery

The four males, including two juveniles, said Cabela was a fighting dog who wouldn't fight, and they wanted to get rid of her.

Last week, we told you about the horrifying case of Cabela, a dog who had been shot three times — twice in the neck and once in the shoulder — and tied with a belt to train tracks in the Sulphur Springs area of Tampa, Florida. The police had to stop an oncoming train before they could free the dog, and they quickly transported her to the Tampa Bay Veterinary Emergency Center, where she has received excellent care. Her leg, which vets feared had to be amputated, was ultimately saved.

Though people heard the gunshots, police had no suspects as of our last story. That’s changed. Now, four males have been arrested. Two are 17 years old; they’ve been charged with aggravated animal cruelty and armed trespassing, with one receiving home detention, and the other staying in juvenile detention and facing a gun charge. The other two are adults and remain in custody; they’ve been charged with possession of a fighting dog.

And with the arrests, the story of how Cabela ended up on the tracks finally became known, and it’s just as shocking as you would imagine. 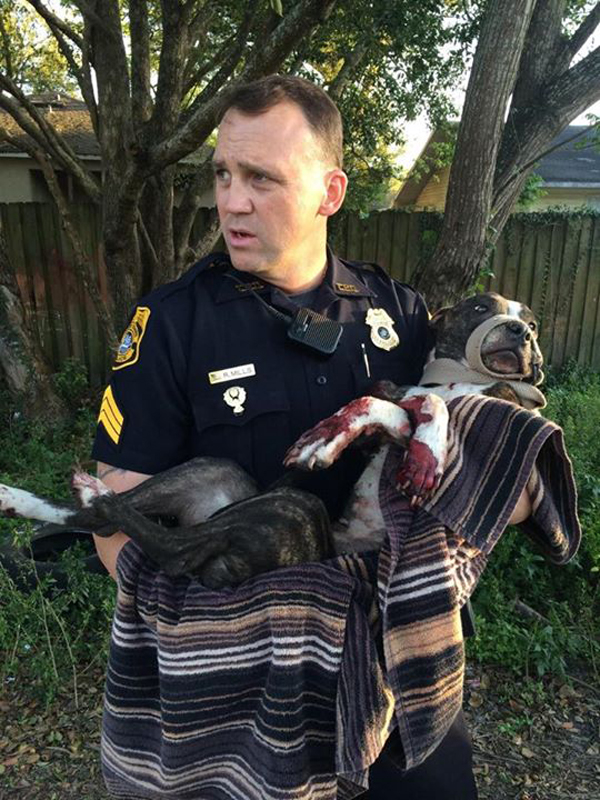 “The two that were arrested today purchased [Cabela] for the purpose of dog fighting,” Tampa Police Department Assistant Chief Eric Ward told Fox 13. “One of the two teens arrested earlier in our investigation indicated that she wouldn’t fight so that’s why they needed to get rid of her.”

Yes, Cabela was a fighting dog who didn’t want to fight. According to Fox 13, she had been bought to fight, but when she wouldn’t fight, the unnamed juveniles took her near the tracks and tried to shoot her. Cabela escaped, but she ran back to suspects Kenny Bell and Darnell Devlin’s home.

The juveniles took her back to the area, tied her to the tracks, and shot her multiple times for good measure. They thought their job was done, but fortunately police responded quickly and saved Cabela. 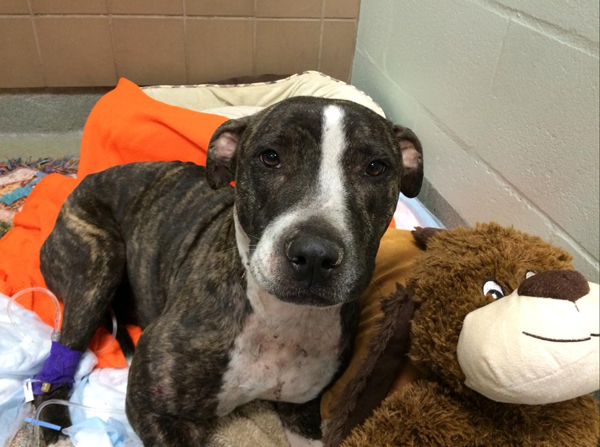 After putting out a call for information and reviewing surveillance tapes, police soon had their suspects and began arresting them. Police also found more fighting dogs at the home of Bell and Delvin, who are brothers. Those dogs are now with Hillsborough County Animal Services; they had injuries consistent with dog fighting, and police found evidence of dog fighting in the backyard.

“There were several injuries, not only along the neck but all over their bodies,” Ward said.

Bell and Delvin’s mother maintains her sons are innocent.

“I’m not going to say I have the perfect boys, but they are not what they’re trying to charge them with and put across the media is not true,” Alicia Young said, according to Fox 13. “I’m their mom, and I’m going to stand behind them 100 percent … I’m trying to clear their name because this is not right.”

She’s a little late, however. Police said they have already confessed everything.

As for Cabela, she is doing well, and vets are hoping for a full recovery. She had surgery on her leg a week ago, and she is starting to put weight on it, showing full extension with only a slight limp. Here’s a video of her walking: