Next on The Scoop: A Disabled Girl Will Keep Her Dog, and a Bad Law Will Go Away

Pick Up Your Dog Poop Because Big Brother is Watching You

The most recent campaign to get people to clean up their dogs draws on scary Orwellian imagery.

Campaigns encouraging dog owners to clean up behind their pets run the gamut from silly to weird to occasionally outright creepy. The story that we wrote up on Friday about painting poo pink fell somewhere between the silly and weird. It was silly the first time someone tried it in 2010; after it was implemented by several different towns, it just became weird.

In contrast, the strategy tried by the charity Keep Britain Tidy zooms straight for the ominous and creepy. The organization has started a new campaign to erect hundreds of billboards with huge glowing eyes and the words “Thoughtless dog owners – we’re watching you!”

Apparently, someone in Keep Britain Tidy read 1984 and came away with the idea that it was an operational “how-to” manual, rather than a cautionary tale.

The signs are made of a material that “charges up” during the day and then glows at night. The campaign is specifically targeted at owners who are walking their dogs in the dark winter hours. The charitable organization’s press release claims, “Research suggested that dog fouling tends to occur at night time and during the winter months, as some dog owners feel that they can’t be seen ‘under the cover of darkness.'” 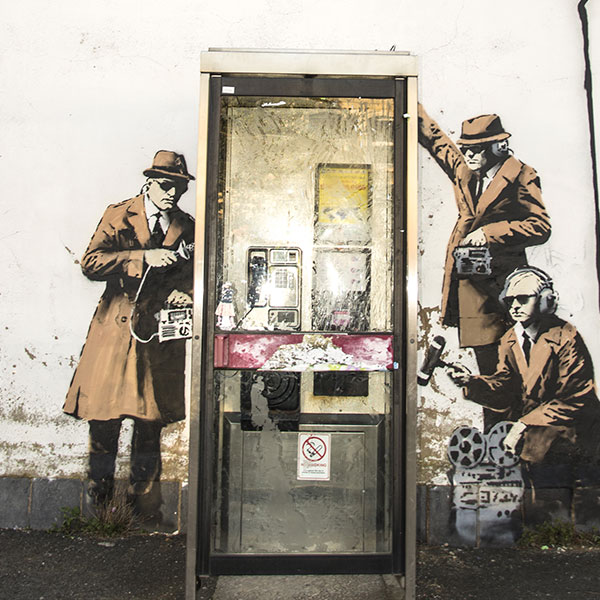 While people who don’t pick up behind their dogs are obnoxious, the campaign seems to overstate them as a threat, as if lumps of stray dog poo may bring down life and civilization as we know it. According to the organization’s chief executive, Phil Barton:

Our most recent research tells us that people see dog fouling as, by far, the most unacceptable and dirtiest type of litter, and the biggest concern in environmental quality. With more than five million dogs in England producing nearly 600,000 tonnes of waste each year, these concerns are understandable. This campaign has been proven to make a difference and encourage the minority of dog owners who don’t pick up after their pets to do the right thing.

The campaign would feel a little creepy and over the top in any time, but gigantic, glowing eyes watching as you walk your dog play fears that are becoming more real than ever. In the United States, Edward Snowden pointed the finger at how the NSA has performed massive surveillance on Internet activity. In the United Kingdom, similar revelations have come out about the activities of the Government Communications Headquarters. 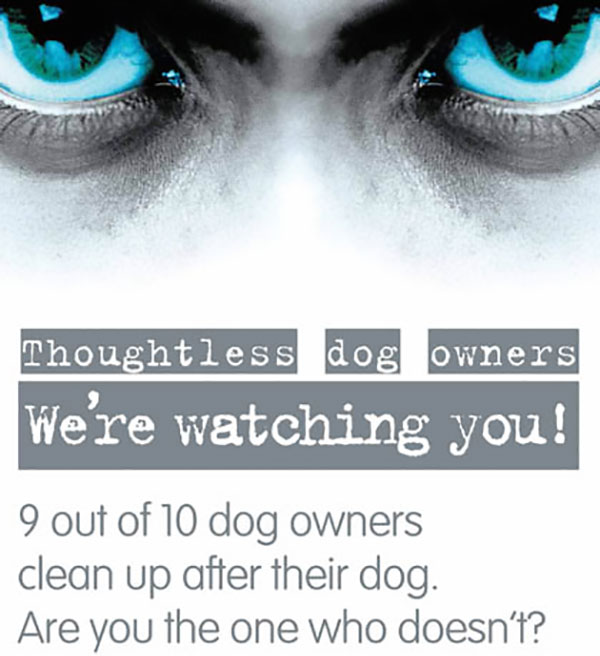 In a world where those things are a reality, giant glowing eyes looking over people to make sure that they clean up their dog poop just cranks up the air of paranoia. Worse, it sends a message that you should clean up dog poop not because it’s the right thing to do for your community, but because if you don’t, some shadowy, omnipotent power will strike you down.

Cleaning up after your pet is part of being a responsible dog owner. Can’t we figure out a way to promote that message without creeping everyone out?