Next on The Scoop: Lulu the Therapy Dog Comforts Mourners at a New York Funeral Home
In the News 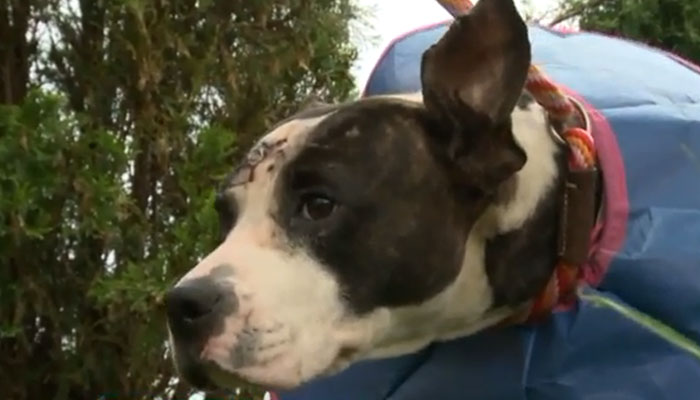 For most dogs, getting hit by a train would be the end. For this Pit named Lucky Penny, it was the route to a new home.

In most cases, whether you’re a dog or a human being, getting hit by a train would spell the end of your story. There would be nothing more to write, except for some words of grief and regret, and then move on.

Happily that’s not the case for one Pit Bull in Richmond, Virginia. A stray who has been named “Lucky Penny” was found on the tracks by worker Chris Fussell last week after being struck by a train. “I saw her laying in the middle of the tracks, and I thought she had passed away by the time that I had seen her,” he told television station WTVR. But as he approached, she wagged what was left of her tail, so he called Richmond Animal Control.

Penny lost most of her tail and one of her rear legs in the accident. In most situations, that alone would be enough to kill her from blood loss, but that’s where the “Lucky” part of her name comes in: The wheels struck her in just the right way to cauterize the wounds even as they severed her tail and leg.

Chris Fussell, who found Penny on the tracks. (Screenshot: WTVR)

Even more astounding is that the damage to her tail and leg was the extent of her injuries. “We were like, surely being hit by a train, she’s going to be obliterated inside, we did X-rays of everything, and there are no other breaks,” said Christie Chipps Peters, Director of Richmond Animal Care and Control.

Penny did have to have surgery to remove the remainder of her tail and leg, but came out of it very well. “She’s very fortunate; an amputation surgery, it sounds horrific, but they heal beautifully from it,” Peters told AOL.

Naturally, with the celebrity comes a very familiar story: Lots of people want to give Penny a new forever home, even as the shelter is filled with many other dogs. “We have more than a hundred dogs in our shelter right now that are as nice as Penny that don’t have the fantastic sensational story, nevertheless need forever homes,” Peters says. “So I would like to encourage anyone that’s watching and listening, please come and see us.”

The same is true of shelters across the country and across the world. The fact that Penny has any story to tell at all is a stroke of fantastic luck, and we hope that her new home will be a happy one and far away from train tracks.

Via WTVR and AOL

Posted in Rescue, Adoption, In the News,