Next on The Scoop: We Test Four iPad Games Designed for Pets

Bonehead of the Week: The One Direction Fan Who Tweets That She Killed Her Dog

She says it was retaliation for band members not following her on Twitter, and we hope to Dog it's a hoax.

Editor’s Note: Please be warned that some of the photos in this post are not for the faint of heart.

A very young, very disturbed, and possibly murderous woman has been doing some insane things on Twitter recently, hoping to get someone from the boy band One Direction to follow her. Late last month, she tweeted the boys in the band, “Follow me or I’ll break my dog’s neck.” She included a photo of her holding her dog down by the neck, pinning the dog to the floor.

Members of the boy band did not respond to her tweet. They probably never saw her tweet, as God knows how many people are reaching out to them on Twitter. 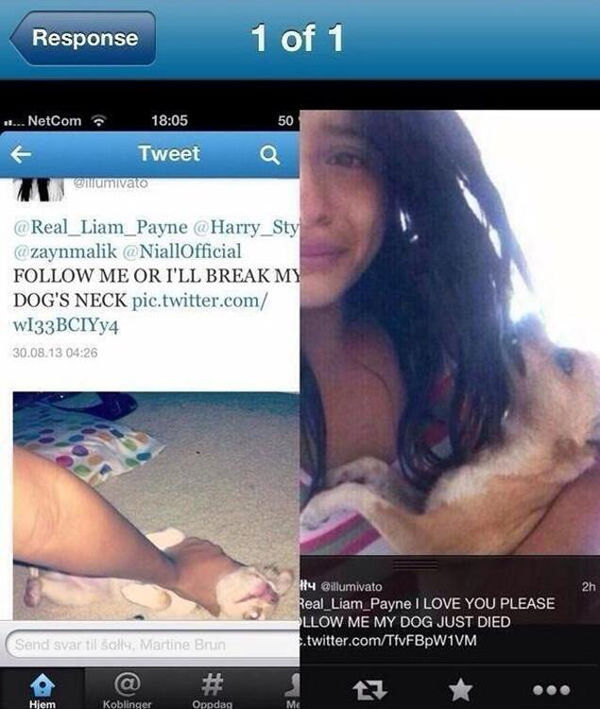 Then, a few days later, she topped herself, tweeting Liam Payne, “I love you. Follow me. My dog has just died.”

We don’t know whether the dog has really died. No news agencies have been able to contact the girl, and her Twitter account has been suspended. But from the above Twitter photo, which we grabbed from the story in the New York Daily News, the dog is positioned in a way that looks concerning.

A compilation of @Illumivato’s tweets can be found on Favstar, though without the photos. Here’s a sample:

Some are calling it a hoax, and sure, it could be. Still, it’s terrible. And some Twitter users aren’t letting it go.

May Fhya, for one, created a Change.org petition asking authorities to look into the Twitter account, as she claims that @Illumivato has a history of posting disturbing images. Fhya included these in her petition; again, we can’t confirm the photos are from her account, as it has been suspended, but they appear to be (the text in the photo included the N-word, which we have blocked out). 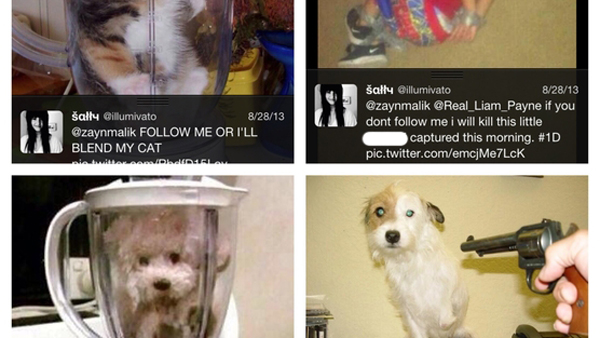 Fhya writes in the petition: “There is a person on twitter by the name of @Illumivato who is posting pictures of her killing her dog by snapping its neck to get more followers. She has pictures of animals in blenders, a dog with guns up to its head, a picture of her strangling (what looks to be her mom), a young boy with duct tape tied around arms on the ground, (and the list continues) basically implying that if she does not get more followers she will kill all of these beings.”

The petition has received more than 3,000 signatures. One Direction hasn’t commented on the girl. We’ll update the story if we hear any news on the condition of the dog.