Next on The Scoop: Eight Pet-Friendly Hotels for Dogs Who Like to Travel in Style

On the Road with Dog-Food Truckers

Hauling dog food across the country is big business, and accidents happen. We dig into the hazardous life of dog-food truckers.

A couple of weeks ago, someone alerted me to a news story of a big-rig crash in the Los Angeles area. The truck had been carrying 19,000 pounds of dog food, and at least some of it ended up on a major freeway, making L.A. traffic even more of a challenge than usual.

The idea of 19,000 pounds of dog food -– about 43,000 two-cup bowls, if that helps you picture it –- on the freeway conjured quite an image. (There are no photos, but I imagine most of it probably stayed in bags.) But oddly, there was no mention of injuries. I figured even if no one else was hurt, the driver of the overturned truck must have been banged up pretty bad.

I needed more info to fill in the story, so I Googled “truck crash dog food” and didn’t even bother to include “Los Angeles.” Really, how many truck crashes involving dog food could there be?

Turns out quite a few, such as a messy 18-wheeler overturn in the Dallas/Fort Worth area that closed all but one lane of busy I-35 in both directions. It looked like this. 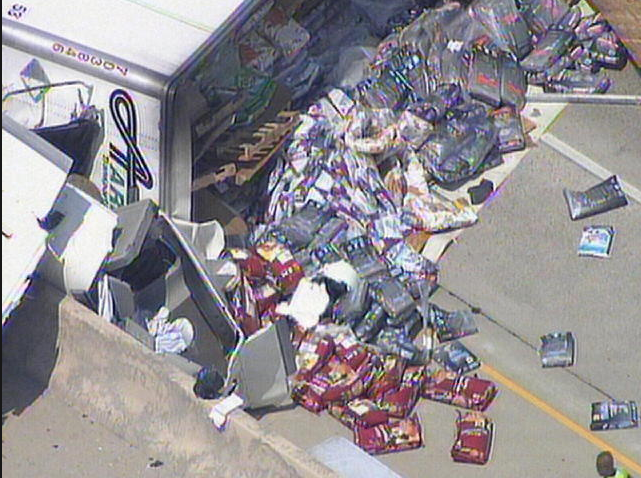 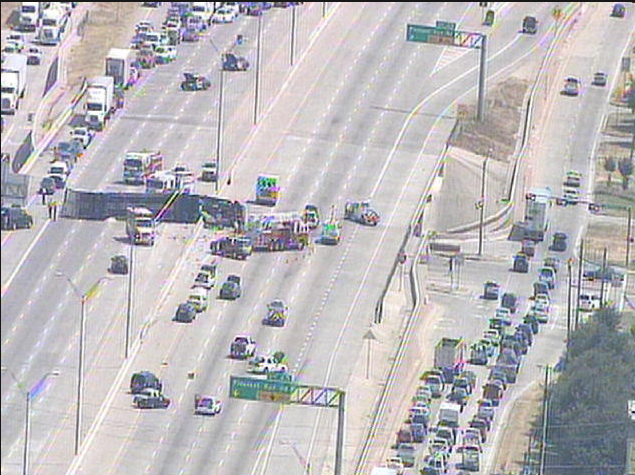 Miraculously, nobody sustained serious injuries. Sadly that was not the case in Gainesville, Georgia, when a car slammed into a dog-food-filled semi outside a Purina plant. The crash ripped loose the truck’s fuel tank and the car and the truck burst into flames. Two people were killed, though the truck driver does not appear to have been one of them.

In Ohio, the driver of a semi filled with dog food lost control of the rig and it crashed into a concrete barrier. Both of the truck’s fuel tanks were punctured, and 200 gallons of diesel fuel poured onto Interstate 90. The driver was injured, but not fatally.

Earlier this month, a tractor-trailer filled with dog food drifted off Highway 70 in Maryland, crashed through guardrails, and rolled 60 feet down an embankment. The dog food ended up all over the highway, as did 200 gallons of fuel (again; I guess that’s the magic number when two full truck tanks are punctured). The driver and his son were seriously injured.

I could go on, but you get the picture.

It got me thinking about how I’ve taken for granted all the bags of dog food that fill the shelves of pet supply stores and grocery stores. Don’t they just appear there? I mean, who ever thinks of how the stuff gets there?

I guess you could say that about many products. But dogs are my news beat, and yes, I admit that my dog, Jake, eats kibble –- good kibble, but kibble nonetheless — as part of his diet. (I’m ready for the inevitable finger wagging, but before you bring it on, know that Jake does get a bit of other nutritious home-cooked food as well.)

So when reading report after report about these accidents, it really struck me that people put their lives at risk to get dog food to the stores where I and so many others buy it. (Of course, drivers do the same thing for the meat and rice and other ingredients a lot of people use for homemade dog chow, unless they buy hyperlocally.)

Truck driving is a notoriously tough profession. “The conditions are brutal, the hours are long. I wouldn’t wish it on a dog,” Henry Jasny, vice president of Advocates for Highway and Auto Safety, told me.

Heavy loads, like trucks filled with tons of dog food, can make for more hazardous driving. Add to that the long hauls, with typical 70-to-80-hour workweeks, and driver fatigue is almost inevitable, Jasny says. Depending on what figures you look at, between 8 and 30 percent of truck crashes involve fatigue.

People in the U.S. have more pooches than ever, which means dog-food sales are huge. In 2011, a record 7.8 million metric tons (a metric ton is about 2,200 pounds) of the stuff was sold here, according to the market research firm Euromonitor. (Thank you to Kurt Gallagher, a director at the Pet Food Institute, for digging up that figure for me.) If I calculated correctly, that’s more than 17 billion pounds of dog food.

Sales show no sign of slowing. So in the years to come, there will be more trucks out there carrying more dog food, and there’s a high likelihood that some of them will be involved in accidents.

Jake is due for a replenishment of his salmon-and-yam kibble this week. And this time, when I walk though the shelves and pallets of dog food, I’ll be thinking of the men and women who brave the roads so that our dogs can eat. I know that’s not why they’re doing it, but they’re doing it nonetheless.

Here’s a virtual paw shake to these unsung road warriors whose work keeps our dogs’ tummies full and happy. Please be careful out there.