Next on The Scoop: San Francisco’s Doggie Diner Heads Get a Crafty Makeover

Brook Barnes was among the victims of a publicity stunt from dog food company Dog for Dog.

When we wrote about the new dog food company backed by Snoop Lion and Chelsea Handler, Dog for Dog, we told you that this food is good enough to be eaten by humans. But never in our wildest dreams did we think that one of the humans to try it would be a New York Times reporter.

Picture the scene (picture The Newsroom, if you like): 15,000 plastic-wrapped copies of The Hollywood Reporter slam down on desks at the New York Times — just another promotion in the big city. Each copy contains a blueberry-flavored nutrition bar called something or other — the reporters can’t be bothered to read every damn piece of promotional claptrap that slams down on their desks, can they? — and they double-fist the bars like Gay Talese and Howard Cosell at cocktail hour and gobble them up in between calls to embassies in Europe and pipe makers in Williamsburg.

Among those who gobbled up the bars: The president of one television studio, a senior publicist at PMK-BNC, and the very writer who wrote up this funny story for the New York Times, Brook Barnes.

All fine folks. All good people who were suckered into eating dog food. 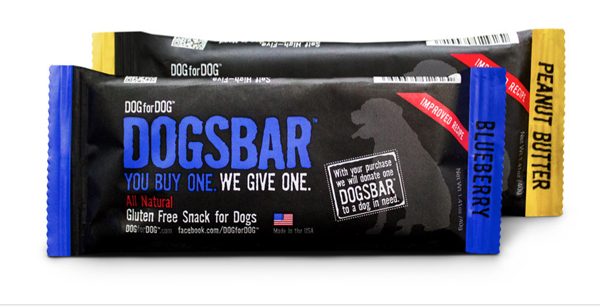 “Yes, we heard people ate the dog bar thinking it was for humans,” said Lynne Segall, the Reporter’s publisher. “On the plus side, it was gluten-free.”

Segall called the giveaway a stunt, hoping that all these harried folk would just eat whatever the hell you put in a promotional giveaway. It worked like a charm. The TV exec and the senior publicist (who wish to remain anonymous) said they only looked at the label when they thought it tasted odd. This is what they saw:

We like to imagine Christiane Amanpour reading that, shrugging her shoulders, then going around and stealing them off her coworkers’ desks.

Nobody has to worry, of course. The “fit for humans” bit wasn’t reported by Stephen Glass or Jayson Blair or even Jonah Lehrer (HAHAHAHAHAHA … sorry). This food is good stuff.

“People do sometimes eat the bars by mistake and then there’s a moment where they race to check the label,” said Rocky Keever, the founder of Dog for Dog. “But they’re all quality ingredients, like you’d find in your grandmother’s cabinets.”

Another reason we love Dog for Dog: For every item bought, Dog for Dog says it donates a like item to a dog in need.

Via the New York Times