Next on The Scoop: Let’s Talk Taurine for Dogs — Grain-Free Diets, Supplements and More
Dogster News 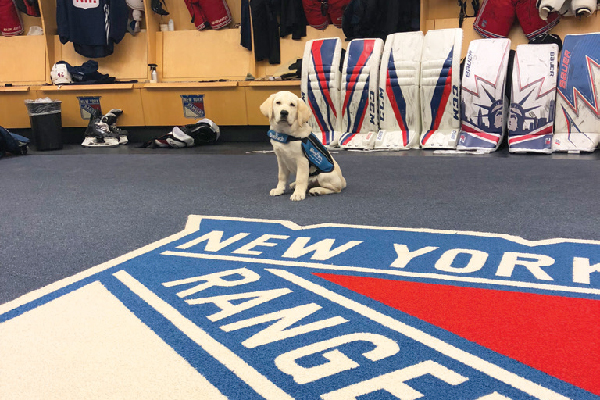 The Rangers and BluePath

The Rangers have partnered with BluePath, a nonprofit that provides autism service dogs who offer companionship, safety and more independence to families with children with autism. This little hockey pup accompanies puppy raiser Saxon Eastman to Madison Square Garden every day and is a regular fixture at practices and games, which gives him lots of socialization experience and opportunities to practice his service dog skills.

Ranger is adored by his teammates, fans and, of course, Saxon. “It’s impossible to look at Ranger and not smile,” she says. “First of all, he’s very cute, but when you think about what his future holds, there is certainly a strong element of inspiration. As his puppy raiser, one of the many things I love about having the New York Rangers involved in Ranger’s journey is the shared value of community. Both BluePath and RangersTown are strong, close-knit communities that come together to work toward a shared goal, and to combine the two is very inspiring.”

A Mix of Play and Training

There is a common misconception that service dogs never get to be “normal dogs.” But when service dogs are off-duty, they can play to their hearts’ content. Ranger is no different. Fittingly, his favorite toy is a puck, and he loves chasing it around — especially with his puppy friends. “Ranger loves to play fetch, and he’s good at it,” Saxon says. “He’s also rather mellow for his age, so he definitely enjoys a good nap, too.” Like most Labs, Ranger is laid-back and friendly, and always welcomes snuggles and belly rubs.

“He’s a very loving, silly but gentle boy, and I think his future career will be the perfect fit for his personality,” Saxon says. Follow Ranger’s adventures at bluepathservicedogs.org, on Facebook @BluePath Service Dogs and on Instagram @BluePathDogs.