Next on The Scoop: You Know Puppies Are a Lot of Work, But Do You Ever Wish for One?
In the News 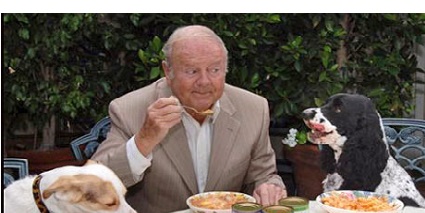 TV viewers know him best as the dad on "Eight Is Enough," but animal lovers celebrate his work in the natural pet foods industry and as founder of National Guide Dog Month.

Dick Van Patten, the actor best known for his role as the patriarch on 1970s hit TV drama Eight is Enough – but also for his transcendent role in the pet food industry with his line of Natural Balance products – died Tuesday at the age of 86.

Van Patten passed away at St. John’s Hospital in Santa Monica, Calif., due to complications from diabetes, according to his publicist.

“Dick’s time with Natural Balance leaves a lasting and powerful impression on those who were fortunate to meet him or share a conversation with him,” the company said in a statement. “His kind heart and passion extended to people and pets, alike. The impact of his work helping animals will be felt for many years to come.”

Van Patten, who played the father of eight children in the ABC drama that ran from 1977 to 1981, re-invented himself as a giant in the pet food industry with his Natural Balance Pet Foods in 1989, producing food with high-quality, natural ingredients. An animal enthusiast, Van Patten also founded National Guide Dog Month, which began in made with 2008 to raise awareness and money for nonprofit guide dog schools in the United States.

In a 2003 interview with The Associated Press, Van Patten spoke about his love of animals.

Posted in Celebrities, In the News,