Next on The Scoop: Do Certain Songs Remind You of a Dearly Departed Dog?

How to Help Moses the Boxer, Found Starving and Traumatized

Picked up on a country road, Moses was given a 30 percent chance of survival. The odds look better every day, and you can help with his care.

Warning: This is a really disturbing story, with pictures to match. If you’re not up to reading about animal neglect and suffering, this might be the time to click away.

Last Thursday, Ruff Love Rescue, a volunteer organization in North Carolina, reported that a white Boxer they named Moses had been found on a nearby country road and brought into the local Blue Flint Animal Hospital. When he was found, Moses weighed 30 pounds and looked almost skeletal. That first day, his chances of survival were estimated at 30 percent. Ruff Love Rescue wrote:

Blood work was done, and his platelets are at 20 percent. He needs a blood transfusion, but Dr. Hampton is worried that could put him into shock and kill him as sick as he is. He has been attacked, and has wounds all over him. He has zero body fat, and muscle has been eaten away. He is full of parasites and heartworm positive. If he survives tonight, it will be a miracle.

Thanks to some good luck and veterinary care, Moses did survive, and as of the most recent report, he’s still alive. Yesterday, Ruff Love reported that he had gained three pounds and was beginning to stand on his own.

“We also are now beginning to see the emotional trauma he has been through,” they wrote. “He cries when touched, crouches down, and seems to expect harm. He has wounds and pressure sores all over his body.” 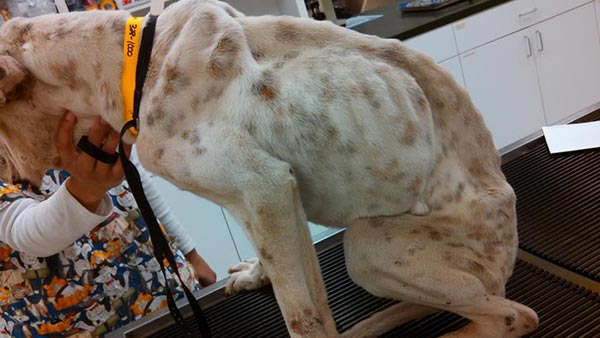 Today, more good news came: Moses is actually walking and eating, although still suffering from violent diarrhea, the result of having eaten meat from a rotting deer carcass lying in the road where he was found. 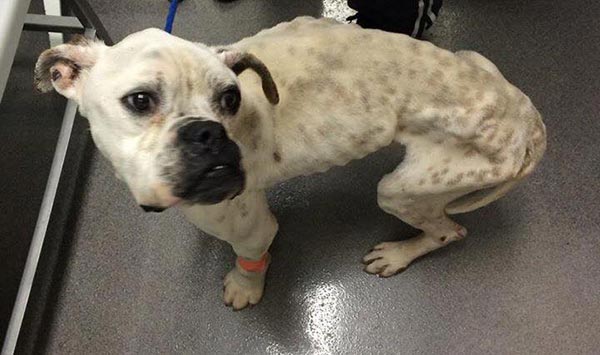 Of course, Moses’s survival and recovery isn’t a miracle; it’s the result of good medical care, and that costs money. Ruff Love is already facing a lot of financial and emotional stress, and it has been reaching out for donations to pay for Moses’ care. His first week alone cost over $1,000, and there’s certainly more to come. At the same time that Moses was recuperating, Ruff Love also sponsored a $1,600 surgery on a broken leg for a dog named Jess, who the vet thought had been struck by a baseball bat. They also helped a third dog, Lenny, through a case of parvo and gave him through a new foster home.

It seems that Ruff Love has been doing a lot of good work with little money. According to their Facebook page, both Moses and Jess still have outstanding vet bills for the care given so far. If you want to help either of these dogs out or just support Ruff Love’s work in general, you can donate at its website.