Next on The Scoop: Dogster Reviews the Latch’NVent

“We looked up and there was this dog that was just running across the lobby,” said Mercy Security Officer Samantha Conrad.

A Miniature Schnauzer named Sissy did something amazing Saturday — she walked 20 blocks by herself to visit her owner in the hospital.

Wait, it gets better.

The dog, you see, had no idea where her owner was. Simply no clue — unless you go by the scent on the air, those intriguing Mom molecules that lured the dog out of her house, down those 20 blocks, and right into Mercy Medical Center in Cedar Rapids, Iowa, where she was caught on on security footage entering the building through two automatic doors and hustling through the lobby.

“We looked up, and there was this dog that was just running across the lobby,” Mercy Security Officer Samantha Conrad told KCRG.

Look at this crazy picture: 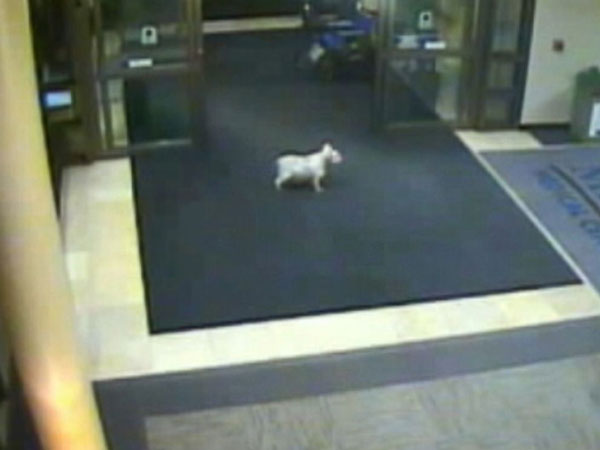 But the story gets even better.

Her owner, Nancy Franck, had not gone to the hospital that day, but two weeks ago for surgery. Her husband Dale had been shouldering the duties of caring for Sissy and her brother Barney at home while Nancy recovered. On Saturday around 1:30 a.m., he realized that Sissy wasn’t in the house, according to ABC News. He was beside himself.

“I kept checking everywhere, calling out, ‘Sissy! Sissy!'” he said. “I was pulling my hair out.”

He had no clue where their dog had gone, but in four hours, he had his answer. Sissy had made her way to the hospital. Security Officer Conrad called him, thanks to the tag on Sissy’s collar.

“She was on a mission that night to see her mom,” Dale told ABC News, “but she couldn’t find the right elevator to take.” 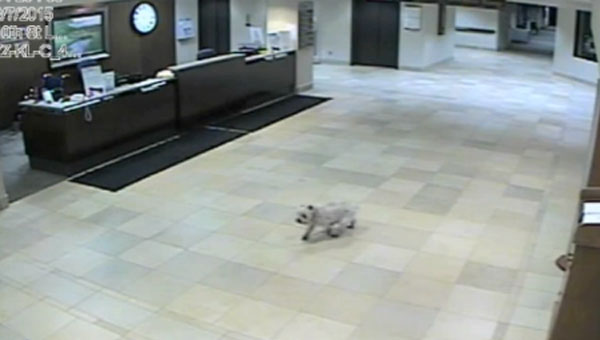 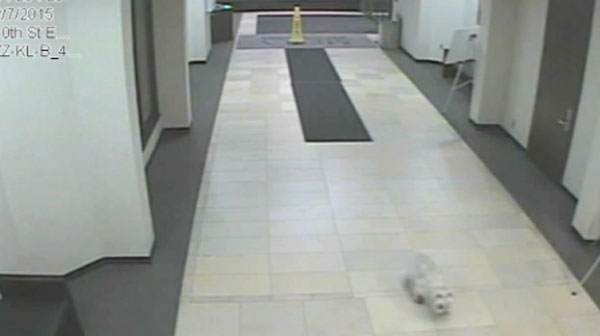 Dale sent their daughter, Sarah Wood, to pick up the dog. Before she came back, though, she took the dog upstairs to see Mom. Sissy deserved it.

“She came over with this wiggly, squirmy dog,” Nancy told told KCRG. “Sissy was all excited and making these happy, whiny noises — just all excited to see me.” 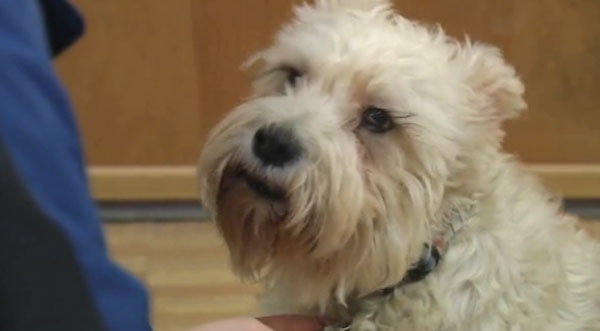 “Nancy and Sissy were able to love each other for a few minutes, and then she went back with me,” said Dale. “She’s my baby, and though it sounds funny now, it wasn’t funny when she was missing. I was worried sick. I’m glad she’s OK.”

Dale has one theory about their dog’s amazing feat — it’s a good one, but it still leaves plenty of space for Sissy to be rightfully called a miracle dog. He told ABC News that he sometimes used to drive the route with Sissy when they would pick up Nancy from her work at the Hall Perrine Cancer Center, which is next door to the hospital. 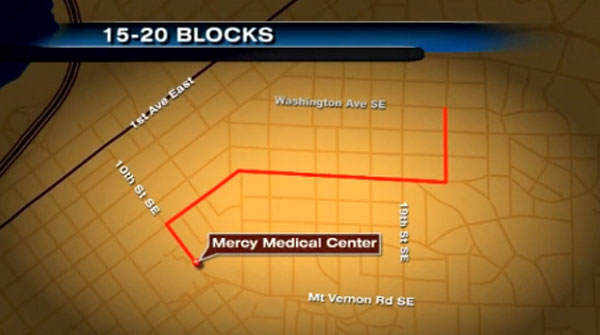 Of course, by that reasoning Sissy should have shown up next door at the center, not in the hospital lobby checking signs for the elevator.

Dale described how he and his wife got Sissy 11 years ago, when she was just a pup. It’s a good story. Maybe it explains something.

“We bought her when she was just about eight weeks old. She came up to me, scratched my leg, and fell asleep on my shoulder. I’d say we didn’t pick her, she picked us.”

Via ABC News and KCRG