Next on The Scoop: Can Dogs Get the Flu?

Did You See the MinPin’s Great Escape on the National Dog Show?

Timmy made news when he fled, but his handler made bigger news as she looked about to cry. We talked to her and got the real story!

Did you see the MinPin bolt from his handler during the National Dog Show?

When professional dog show handler Sarah Murphy agreed to show Timmy the Miniature Pinscher at the last minute in the Toy group, she never imagined she’d end up being featured on the Today show and in news reports on NBC, CBS, ABC, and CNN — for starters. Or that the still photo everyone focused on was “that face.”

“Dog Makes a Break, Handler Devastated” went the headlines. And suddenly, Murphy was the most famous dog handler in the country. But not for helping a dog win Best in Show — that went to the Bloodhound’s handler — but for letting her charge get loose during group judging and steal the limelight.

But really, how hard can it be to walk a dog around in a circle and hold onto him? Especially one as small as a MinPin? It’s not like he’s a Saint Bernard or an Irish Wolfhound.

Murphy had never shown Timmy before, but she had shown a different MinPin earlier that day in the breed competition. She says she’d been joking about how “showing them is like having a hummingbird on a string,” she recalls, even thinking how bad it would be if one ever got loose! The truth is, MinPins are more like hummingbirds on speed. And that’s before taking one who doesn’t know you into a giant group ring, under dazzling lights in front of a huge noisy audience!

Timmy’s owner wasn’t up to showing him and asked Murphy to take him in. Things started off fairly well, as you can see in his individual exam:

Timmy’s ballerina imitation definitely impressed the crowd. But notice on his final go-round that Timmy veers to the side — that’s the gate he sees, and he wants to find Mom! Still, Murphy gets him past it and on his way.

Back in line, she was trying to keep Timmy happy, letting him play with some other dogs. That’s when it happened. “They were jumping back and forth and around and over one another, and they started to get tangled, and at some point, I just lost the lead.”

The rest, as they say, is history — because Timmy sure was history. He remembered exactly where the gate was and beelined toward it, oblivious to the handler with her Cavalier whose path he was crossing — and to the fact that he was on national TV. Or maybe not. MinPins are such hams.

What to do? Murphy didn’t want to disrupt the Cavalier’s show time, so she waited until he was almost back to the judge before going after Timmy. “I was hoping nobody would notice,” she says. (Um, Sarah, they noticed.)

Meanwhile, Timmy’s escape route had been blocked by the Men in Black (or, well, show officials in tuxes). But MinPins aren’t known for their stellar ability to come when called, even to their owners, much less somebody they’ve known for 10 minutes. “He turned around and looked at me like I was Satan, and I was sure he going to bolt the other way!”

But Timmy decided he was done with his 15 seconds of fame (everything is faster in MinPin time) and gave himself up. Sarah carried him back toward her place in line. That’s when it happened: the face seen round the world.

“My only regret is making that face!” 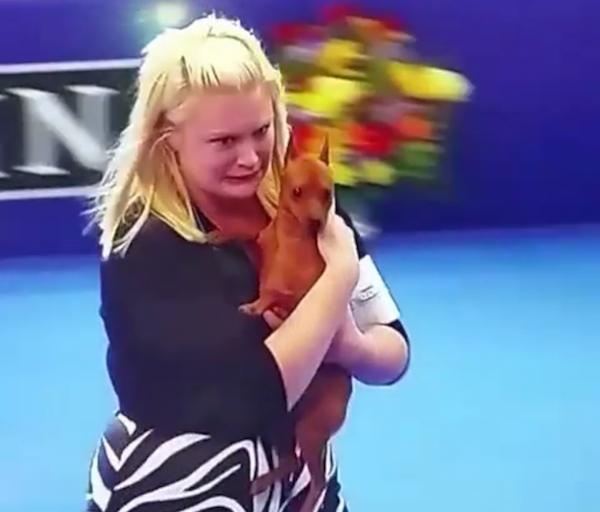 And they all thought she was in tears.

“I wasn’t crying!” Murphy insists. “I was thinking her owner was going to be upset, and then I made this face … and of course that’s what they decide to show! Why couldn’t they show me kissing on him right after that?” Yeah, right.

The National Dog Show is pre-recorded and highly edited. Only a few dogs get to be highlighted. The producers could have chosen to cut Timmy’s escape altogether. But they know good television when they see it. Murphy’s friends teased her about figuring out a way to make sure her dog didn’t end up on the cutting room floor. Actually, hundreds of her friends teased her, about just about everything. One even Photoshopped a guinea pig in place of Timmy (Murphy is known for bringing her pet guinea pig to shows), with the caption: “What was amazing is later that night in the Miscellaneous class …”

It could have been worse. All handlers have stories of dogs who put them in their place in the ring. Most just don’t do it on national TV. But there was that German Shorthaired Pointer some years ago who took the world’s longest poop — right in front of the tuxedoed judge and on live TV in the Sporting group at Westminster. It took so long, it doubtless made the broadcast go overtime. Now that’s a way to get airtime.

And of course there was this imfamous poop at the Crufts agility trial:

The handlers may have been mortified, but we suspect that the dogs are still laughing. Timmy is probably signing screenshots of his great escape, and Murphy is practicing smiling — and holding on to the lead tighter.