Next on The Scoop: Ever Felt Like Barking at the Internet? Watch This Dog’s Adorable Media Criticism

Hank the Milwaukee Brewers Mascot Gets a Doghouse

The canine toast of Major League Baseball finally has a little place of his own in foul territory.

You might have heard of Hank, the Milwaukee Brewers furry mascot. We wrote about him when he was just a beaten-down stray who wandered on the Brewers spring training camp in Arizona looking for a shot. He got one. He made his mark. The brass called him up to the big leagues and shipped him to Milwaukee with the squad. The rest is history. Toast of the town, all that.

The Brewers won-loss record is now 15 and 5. First place in the National League Central and the best record of any team one month into the season. Did Hank have anything to do with that? I’d say so.

In the meantime we’ve been admiring Hank from afar, the little southpaw with a wicked friendly streak, disarming even the most hardened coach and deranged lifetime Brewer fan. But now, we have to chime in. You see, the Brewers finally made Hank a doghouse, to be placed on the field during games, giving Hank a little place to call his own in foul territory.

We can’t hold back any longer. Get a load of this crazy doghouse! 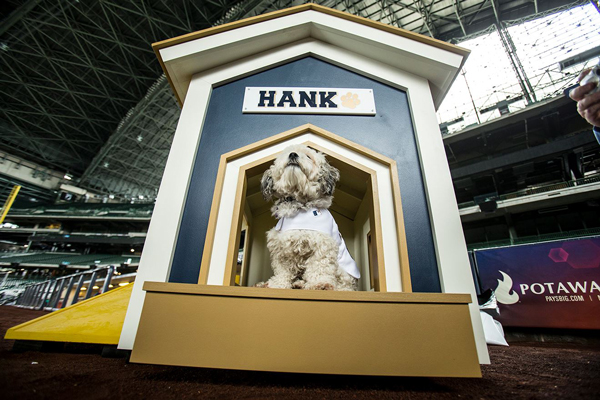 It seems the Brewers are treating Hank like a champ, which is nice to see. Also, according to Fansided, merchandise sales are “through the roof.” Trends like that should keep Hank in wet food for a long while.

Imagine — just two months ago Hank was wandering the streets of Arizona, with no idea where his next meal was coming from, and now he’s the toast of Milwaukee, glad-handing fans at Miller Park and leading the team onto the field. It can almost make you cry, if you weren’t a tough-as-nails baseball reporter.