Monument for Military Dogs Is Set to Open in San Antonio

The Lackland Air Force Base structure honors the four breeds used most often in the military.

The United States government has no shortage of military monuments, but until now, there have been no national monuments commemorating dogs who have served alongside the soldiers. On Monday (Oct. 28) at an Air Force base in San Antonio, that changes.

A dedication ceremony for the U.S. Working Dog Teams National Monument, whose backers we interviewed earlier this year, will be held at Lackland Air Force Base, which has been home to the Military Work Dogs program since 1958. The program trains dogs for a variety of jobs including patrolling and detection of drugs or explosives. Right now, the U.S. armed forces have about 2,300 active working dogs in their ranks. 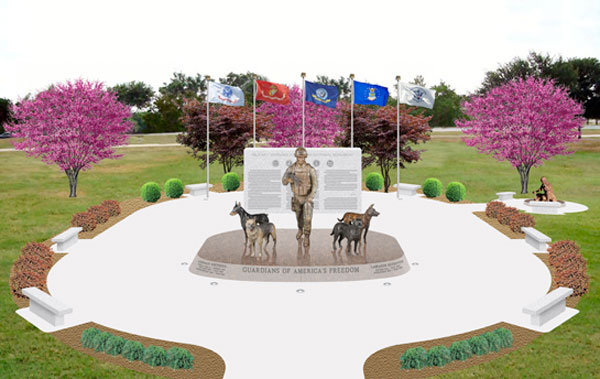 The monument is the passion of 65-year-old John Burnam, who served as a scout dog handler in Vietnam.

“I experienced firsthand how valuable these dogs are at saving soldiers’ lives,” Burnam said in a press statement. “Yet, despite their value, when we pulled out of Vietnam the dogs were left behind. They were fellow soldiers and they were our best friends. They were heroes and they were left to die. So I was determined to get the dogs, of all wars, recognized at the highest level of our nation’s government and then build them a magnificent national monument to ensure they would never be forgotten again.”

The monument that is the culmination of Burnam’s effort depicts a modern military dog handler, surrounded by four dogs, representing the breeds that have been most commonly used in the military: a Doberman Pinscher, a German Shepherd, a Labrador Retriever, and a Belgian Malinois. Today, the majority of dogs serving with the armed forces are Shepherds. 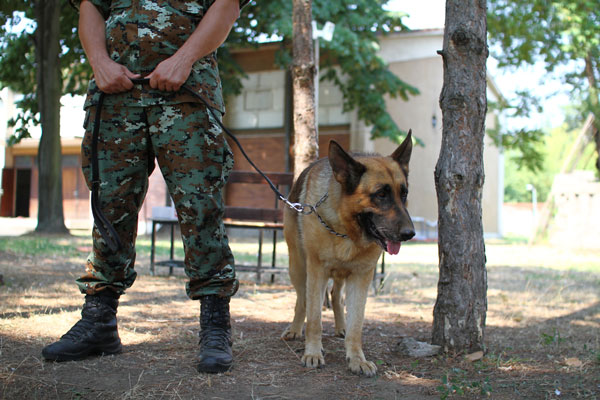 Dogs have been used in the U.S. military in various capacities for more than a century: During World War I, they were used to clear rats and other vermin from the trenches. It was during World War II that the military started training them in mass quantities. More than 10,000 dogs were trained and deployed in World War II, mostly as sentries.

The training that dogs go through today is far more sophisticated than it was in the 1940s, and dogs go almost everywhere that humans do. Training for military dogs can include learning to jump out of helicopters, or even remaining calm in free fall while parachuting with a human handler.

While so much is becoming virtualized and remote-controlled, dogs are becoming more a part of the military than ever. Most of them might not be able to appreciate the big bronze monument that Burnam worked to get them, but hopefully it will make humans appreciate them a little more.